After a bit of faffing about and the usual end-of -year madness, I've managed to kick off the painting of the Victrix figures.

The last post was about setting them up with base-coating.  Now I've decided to do them as an Italian regiment, this post shows how I've started off.  Base colours first.

I actually started with the faces and hands using Dwarven Flesh (I use Coat d'Arms and Citadel paints mainly) I usually leave them until everything but the metalics have been done but because these are predominantly white I've done the lighter flesh bits first as I'm hoping there will be less touch-up required.  Then a nice Bubonic Brown sandy yellow colour for the covered shakos and a Wood Scaven tan brown for packs and gunstocks.  I use my own mix of Shadow Grey to which I have added dark blue to create a darker 'Horizon Grey' for the greatcoats on the backpacks and across the body of the 'Port Aigle' Colour Guard. I then add a weak black wash to this to accentuate the folds and tone which I will lighten up later on.

To do the white uniforms I have devised a system starting with Space Wolves Grey - which is a very light powdery blue - which I then apply a blue wash.  Again the wash is one I make up using a touch of black, Regal Blue and a few drops of Rotring blue-green ink (pure pigment, not much is needed) all watered down at 20:1 (or thereabouts).   This all runs into the folds and darkens up the figures into a nice deep tone light blue.   Then I apply the first coat of white - almost dry-brushing: taking care not to make it too watery or run into the creases and folds.   After this I apply a very watery black wash.  This creates fine lines for the equipment belts etc and blends the shades into the deeper folds.  The second coat of white is added after this, picking out the higher relief detail including cross belts, buttons etc, and the musket straps.  That completes the white until the final touch-up after the rest of the detail is done.  The first picture here shows the progression from figures right to left, of the four steps doing the white uniforms on one stick of figures from powder blue undercoat to (2nd) coat of white. 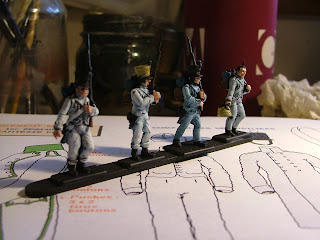 And the same from the back, showing how the detail is picked out with careful application of the black wash 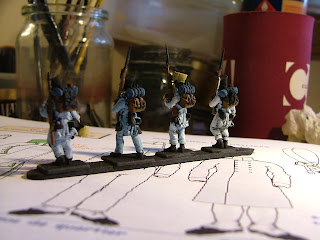 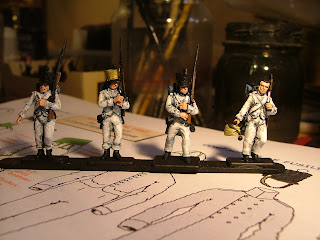 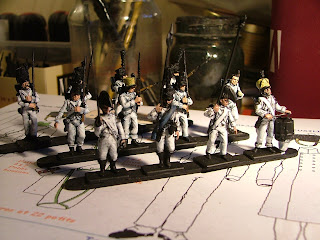 The next stage will involve the equipment and picking out the facing colours, which I will post in due course.