Recently completed a commission for a mate (ok, ok - it was for my lead pimp Doug - I'm now his official painting bitch alright?!!!) consisting of a horde of proto-Napoleonics. The figures are from my favourite period - Napoleon's campaign in Egypt - and my favourite unit his Camel Corps (des Dromadaires?) The figures are mostly Brigade and look like (as in probably are) Paul Hicks sculpts.  Beautiful figures, I am envious of Doug's collection of French from this most underdone of pre-Napoleonic eras. 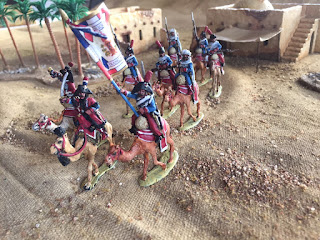 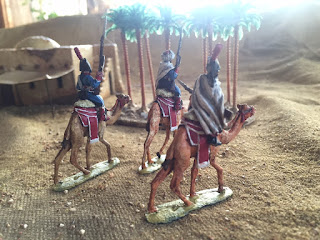 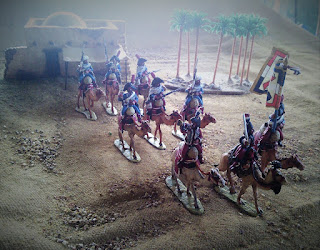 Unfortunately the camels suffer from the spindly leg syndrome as bad as the Brigade Mameluke figures I painted last year. If you use the hot glue gun to put 'em on paint sticks remember to use a hairdryer to heat and melt the glue a bit when getting them off or you'll be in for busted fetlocks (if fetlocks is wot camels 'as orright?!) The very long muskets, all with pointy bayonets is the other vulnerable bit to look out for. I must have repaired at least half a dozen of the bl*%dy things! 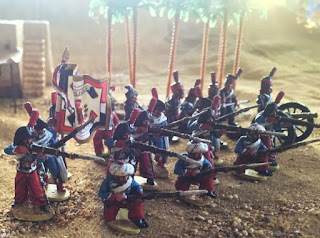 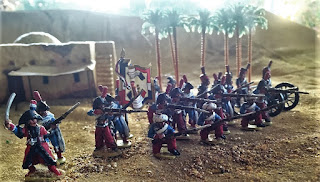 They have the most colourful of uniforms, of which there were several varieties during their short-lived time in Egypt. They were formed from dismounted hussars (French originally had a shortage of suitable horses after they landed) and various odds and sods from the infantry, operating as a mounted or mobile infantry unit. They quickly changed from the tight-fitting hussar style uniform to a more Oriental one with baggy red high waisted pants and even the cocked hats for various types of turban. Clothing shortages meant nothing was implemented uniformly as it were and there was a wide variety - withe the black fur-trimmed long bright red overcoat for the officers being just one of the bizarre variations.  Sky-blue and bright red seem to have been the most consistent colours. Never more than about 4 squadrons of 2-300 mounted with another 80-100 each on foot (or in carriage!) they were nonetheless quite effective scouts, operating as a mounted infantry. 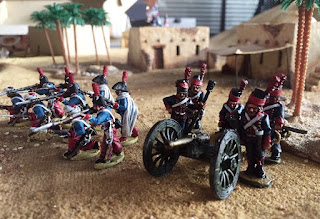 The other figures I painted up was an early horse artillery gun and crew. The figures look like Eureka and are quite nice in a chunky way.  The horse artillery of the period was really just a more mobile version of the foot artillery, most of the crew riding athwart a sausage wagon a la Austrien style. The chafing they must have suffered rattling across the rocky desert in the Middle East doesn't bear thinking about! Very rough on the old Jatz crackers eh wot? Mercifully didn't have to do another one of those sausage wagons and riders for Doug. Nicely animated figures, they fit in well with the Brigade Cameleers. 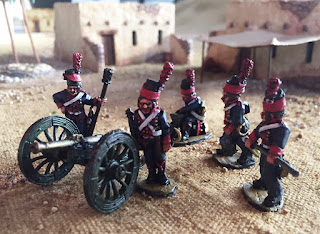 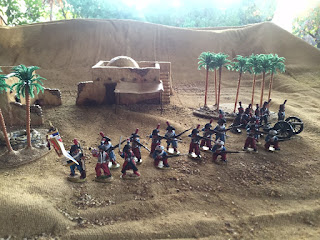 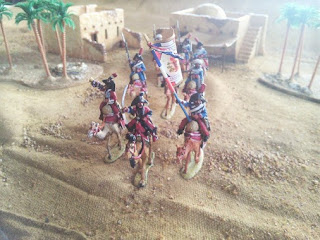 In addition to the camel patrol - some of the Brigade Mamelukes come charging in! 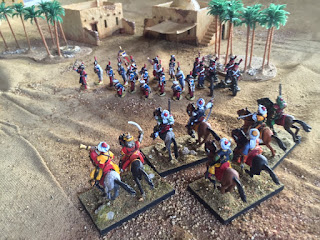 I also re-based one of those I'd done previously and added a third figure and camel. Improvised to have him dismounted and holding the camel. The ridiculous WRG basing insists on three of these mounted figures to a 60 x 40 base. This used to work well with 25mm but the scale creep in the last 20 years means 28-30mm figures are now the norm, and this size base gets mighty crowded. Its cheating a bit - but there are three figures to a base! 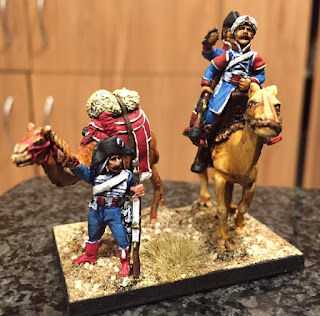 Where I had to use a bit of invention was in the standard used. As they were a mounted infantry I opted for an infantry style flag.  There is some conjecture about what they actually carried so a large Revolutionary style flag seems appropriate.  I did two of the same for the mounted and dismounted Camel Corps unit. There was a Revolutionary Commissar - type figure that could easily be a young Bonaparte which I quite liked and have added into the command group, this time on top of one of the flat roofed mud houses. 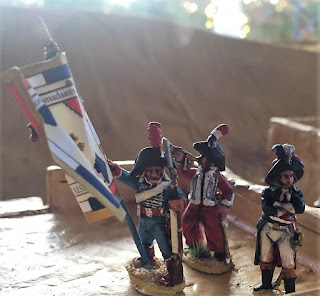 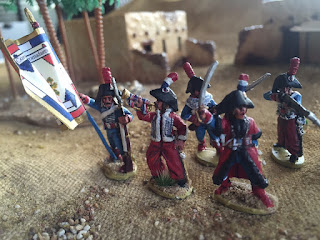 Last but not least, the mounted version. 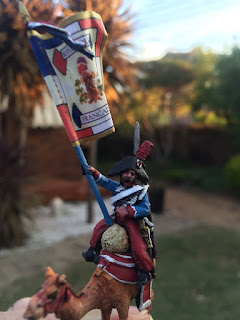 Still have my own Ottoman Turks to finish but these and others should give Doug and I enough to stage a Napoleon-in-Egypt game later this year.
Posted by Doc Smith at 1:28 AM No comments: