This is my second attempt to post after the @#$%ing PC crashed last night and I lost the lot. Usually saves a draft - not this time Josephine. Swear I have so many things happening at the same time its doing my head in. Well in the immortal words of Bullwinkle Moose: "This time fer sure!"

First up my hearty congratulations to Ian, Leigh and Greg for putting on another great Little Wars convention.  Raised over $400 for Soldier On so a great effort one and all. And what an enjoyable day's gaming there was!  So many different and amazing looking games - a bit of something for everyone.  I think the traders did good business as well - Dean from Olympian ran a well-attended bring-and-buy as well as his usual array of laser-cut precision MDF bits and BA-CoC-Saga etc etc bits and bobs at bargain prices as well as Nick from Eureka with a mouth-watering array of fantastic figures. Wargamer heaven it was.  Now the games.

First I noticed was an amazing Rome v Carthage in 54mm with hundreds of figures - looked spectacular! 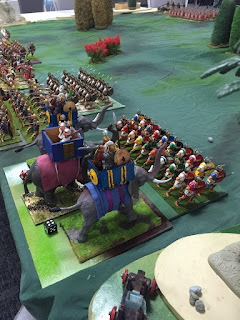 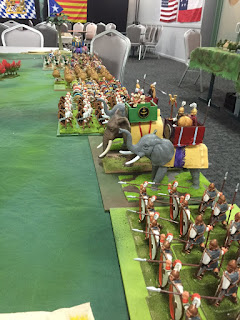 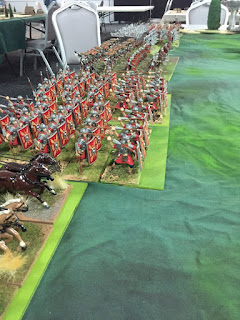 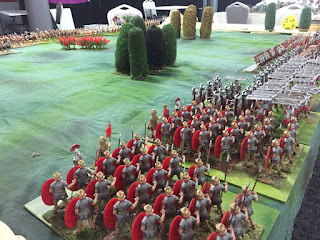 Next to our Sharp Practice game my mate Cam had set up a very cool fantasy Horde of the Lizard King game with a suitably glittering prize horde of ... well , glittery stuff AND spectacular scenery a la Ankor Wat junglie-like hall. Look here are some photos ok? 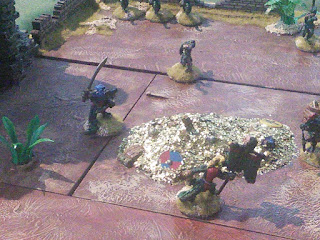 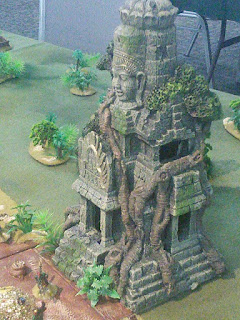 Man, I seriously covet my neighbour's temple. Have no idea what I'd use it for - me just wants it. My Precious.

Also right up there in the wargame desirability stakes was Greg's Viking Raid game with some spectacular to-scale (28mm) Viking longboats. Although he doesn't realize it he has generously donated a couple of his excellent photos of it for my blog.  Thanks Greg! 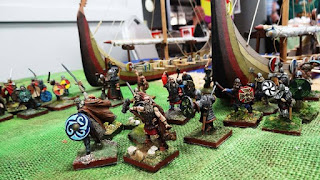 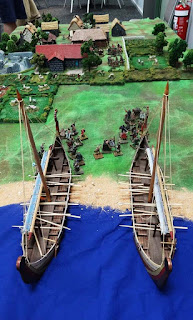 Another was a great-looking table of modular terrain for a 20mm - 1/72 WWI Western Front game with tanks, cavalry (!) gas-mask-clad infantry and beautifully made trenchworks. 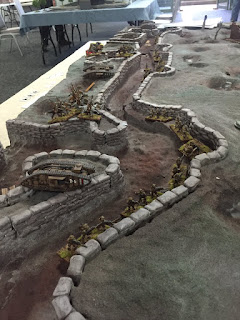 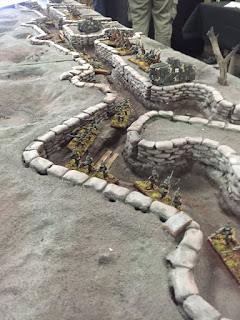 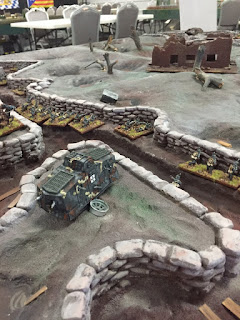 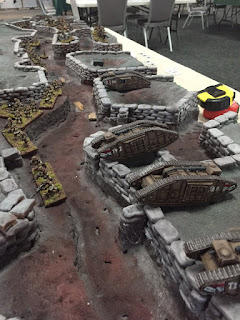 To the west of this - waaay out west - was a small but spectacular table that looked like it could have been a Hollywood film set for a game of Dead Man's Hand. A superbly-made Western town replete with railway terminal and the Dalton gang drawin' thur  six-shooters ta pump dang varmints fulla lead that be needin' a good shootin'! I'm sure that's what they told the Sheriff.  Oh wait... HE was the one they were pumpin' fulla lead?  My bad. 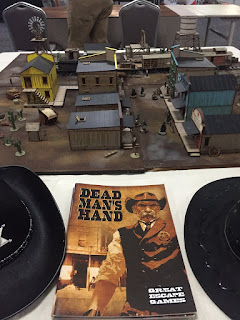 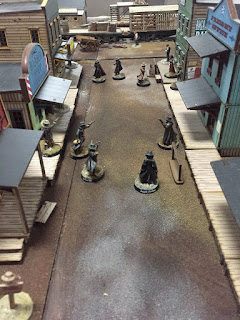 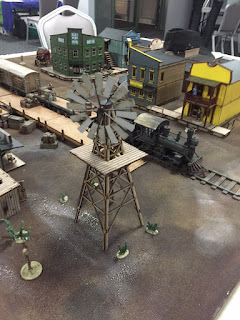 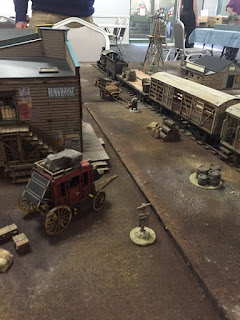 Also a spectacular-looking game table with an amazing set was the WWII Arnhem game brought by the same chaps that did the equally spectacular-looking raid on a U-boat in its pen game last year. The work they must put into these is mind-boggling.  Have a look at these photos and prepare to be boggled. As with the above game, my phone-photography doesn't do it justice. The last photo is a rather neat Charge of the Light Brigade in 15mm. 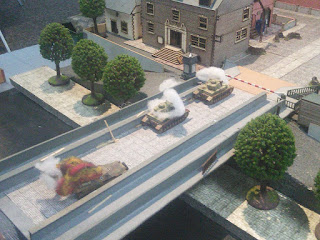 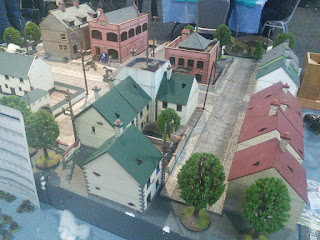 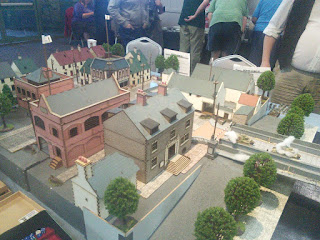 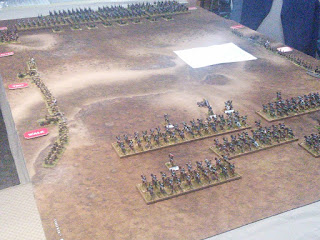 Myself Mark and Owen put on a Sharp Practice (ver. 2) game 'Somewhere in Russia - 1812'. I supplied the figures for two Russian, a French and a Polish force in what we intended to be more of an encounter skirmish game. Michael Geld took the Polish command (thanks Geldie) to round out numbers and proceeded to do what Poles like to do when they encounter Russians - give 'em a darn good flogging!  Pity the same couldn't be said about my French who failed to advance and dislodge Owen's deftly-handled Russians opposite.  I put it down to Cossack-fear.  My Voltigeurs fired a thunderous volley into them that killed two and put no less than nine (nine!!!) shock on them which saw them...  run away a little then ignore my lousy shooting for virtually the rest of the game. 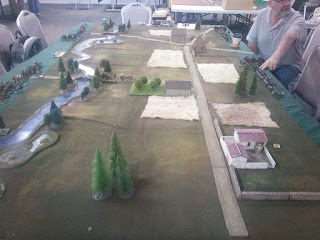 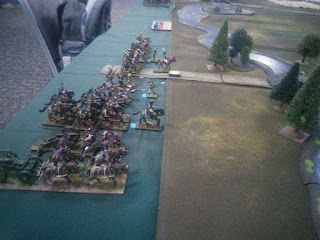 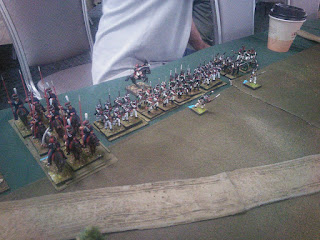 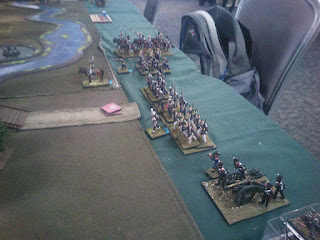 The figures are a mix of mainly Perry's and Front Rank - with a few lovely old Foundry (French Legere) and some odds and sods thrown in like Victrix plastics for two brown jacketed units of the 'Emperor's Cousins' (Corsicans of course). The Poles are all the beautifully Paul Hicks sculpted Murowski Miniatures with Perry's Guard (Polish) Lancers.  The greatest success and failures of the game involved the French & Polish cavalry.
My infantry fared little better - stuck in the middle of an open field they copped horrendous casualties from Owen's infantry and gun in front and his Jaegers in the apple orchard on their right.  Even when my skirmishers (more Corsicans of course) eventually came on and joined in they could make no headway. At the end they had 14 out of 24 figures left and were carrying 26 shock! My artillery made up for it a bit by enfilading the unit that bounced my dragoons but those Russians are a tough lot - never looked like budging let alone breaking!

It was a different story for the Poles.  Although the cavalry were virtually destroyed by their efforts, they did drive off most if not all of the opposing Russian infantry.  The Polish infantry volleyed Mark's cossacks out of the way (no cossack-fear for the Poles!) advanced virtually unopposed and got into the village, copped some canister hits from Mark's gun, laughed it off then bayonet charged and captured both gun and the crossroads objective. 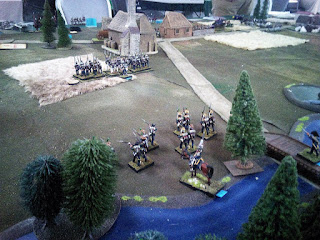 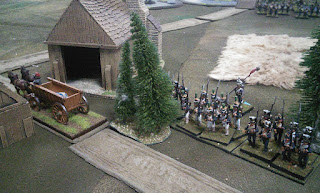 While remaining completely unimpressed with the SP Hollywood history treatment of Fisticuffs between fresh cavalry and infantry not in a defensive formation (result = completely unrealistic crap simply due to the lack of factors to hit for the cavalry) the overall mechanism works and makes for a fun game. It also means you don't have to have masses of figures to have a reasonable wargame.

Thanks to those that joined in and hope they had a good time - two to three hours for a 60+ points a side game is very doable even on a large table and we managed that with a break for lunch.  And a nice icy cold beer afterwards to celebrate a successful Little Wars for another year!
Posted by Doc Smith at 2:13 AM No comments: