As promised, herewith are the photos of the Black Powder FPW action at WinterCon.  As we had surmised, it ran its course over eight turns and after a pretty tough and even fight, ended with a pretty convincing Prussian victory by Turn 8.  The big difference this time was in the higher infantry casualties inflicted by the much bolder French this time round. This time the Prussians lost no less than 9-10 battalions of infantry and three regiments of cavalry. The French lost about 8-9 (or more?) battalions of infantry, three or four regiments of cavalry and all their guns save one - the equivalent of nine batteries (including the attached Mitrailleuse) in BP rules.  The fact that the Prussians didn't loose a single gun- even though half their eight batteries took casualties - says more about the effectiveness of the French artillery.   The French have more guns on the table, but they are less effective at long range than the Prussian ones - and the Prussians have three batteries off table firing at long range. While this aspect of the game produced a slight imbalance in Prussian favour, it did conform to historical reality where in the end it was the Prussian artillery that pounded the French into defeat and destroyed Froschwiller when the Prussian infantry couldn't take it.  Historically the Prussians lost over 9,000 battle casualties - slightly more than the French but the latter also lost an additional 12,000 prisoners.  In our game we didn't get the prisoners as the French withdrew but the casualties were about the same.

The French in the vineyards outside Froschwiller 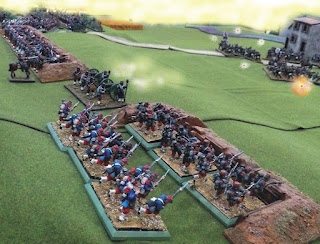 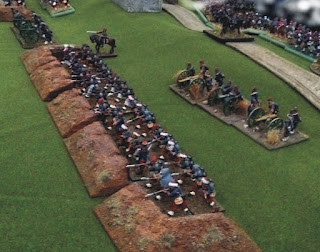 The Zouaves next to Froschwiller 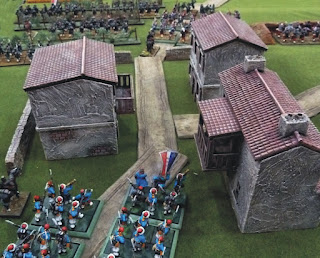 The Turkos in reserve just behind the town 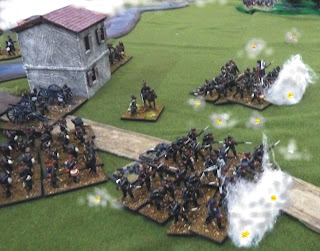 This time the Prussians came under heavy Chassepot, artillery and Mitrailleuse fire from the outset, with predictable results! 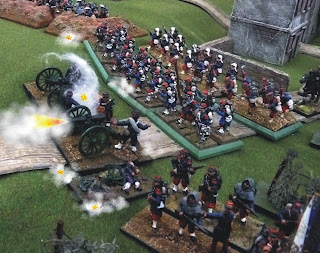 The Prussian tactic was to target the French gun batteries and take them out before they could inflict too much damage on the successive waves of infantry coming across the open ground in front of the town.  For the most part, it worked. 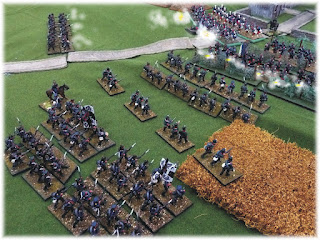 The first wave of attackers destroyed, the second and third waves spread out and engage the French in the vineyard.

On the other side of the table Dom's second and third waves attack the Niederwald and advance on Elsasshausen in the French centre. 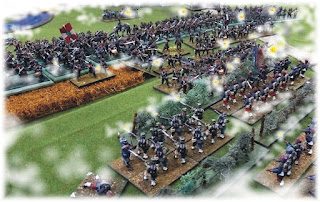 The successive waves of Prussian attackers bunch up at the end of the vineyard - but can't break in!
The French Chasseurs a Pied (closest) beat off no less than three attacks by battalions twice their number. 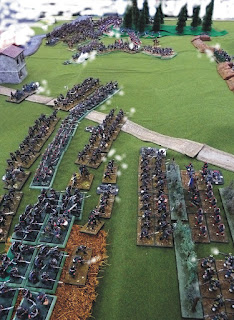 The situation by Turn 5.
Note the two battalions and artillery battery that were across the road into the town have been eliminated - but so had three battalions of Prussians!

The situation at the Niederwald, Turn 5.  Dom's massed Prussians had made sustained attacks but had been held off with heavy casualties by outnumbered but resolute Zouaves and Chasseurs. 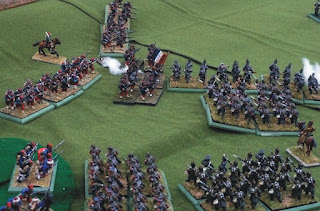 The pressure on the Niederwald position was intense with the French threatened to be driven out by sheer weight of numbers.  To relieve the pressure, the French in front of Elsasshausen left their entrenchments and supported by the Chasseurs in the Niederwald, drove into the advancing Prussian columns, bringing them to a sudden halt. 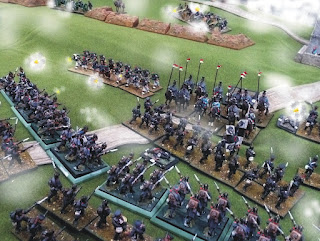 Perhaps inspired by the success of the counterattack in front of Elsasshausen, the French lancers had a rush of blood to the head and charged unsupported into the mass of Prussians advancing up the road to Froschwiller.  The usual fate in FPW of cavalry who attempt to frontally charge infantry is to be cut down but perhaps the sheer audacity of the move unsettled the Prussians who failed to stop them with shooting and still couldn't defeat them in three rounds of hand-to-hand! Similarly to the Cuirassiers, they were finally wiped out by a flank attack by a fresh regiment of Prussian dragoons. 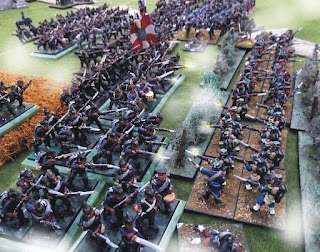 Meanwhile in the vineyards next to Froschwiller, the relentless assaults by Michael's Prussians had slowly ground down Mark's French who were reduced to the plucky Chasseurs and were forced to bring up their reserves as the Prussians gradually expelled them from the trampled vineyards. 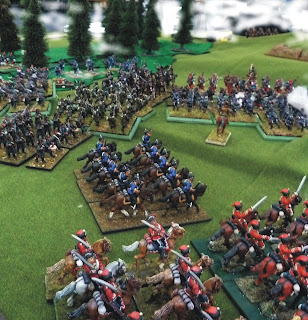 As the French attack next to the Niederwald swung in the balance sucking in more French  including their cavalry brigade which had been in reserve behind Elsasshausen village.  Now a hole opened up in the centre of the French line which the Prussian cavalry - which didn't arrive on the field until Turn 5 - quickly  exploited, with three of the four regiments galloping in.  In the background the French Cuirassiers made another desperate 'deathride' into the middle of the Prussian line opposite the Niederwald but they were on their own as the unfortunate French Dragoons on the other side of the forest had been destroyed attempting to charge the Prussian guns.

The French armoured heavies should have punched through but the combination of Prussian Needlegun rifles and sheer numbers meant they found themselves, similar to their lancer brothers on the left flank, held up in debilitating rounds of hand-to-hand. 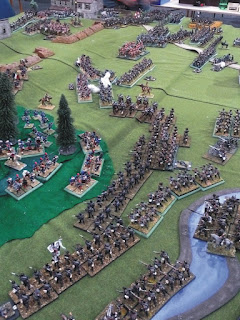 The situation Turn 7 - the final phase of the battle.  The French Cuirassier had failed to break through and trapped in front of steady Prussian infantry, they were simultaneously charged in the flank by a fresh regiment of Prussian Dragoons and destroyed. This proved to be a decisive point as with that and the loss of a supporting battalion of infantry, the French counterattack in the centre failed. 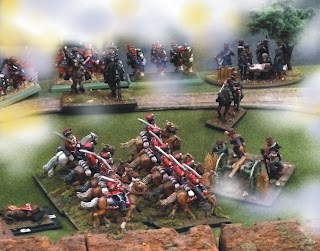 Must be something in the water at Froschwiller as this battle inspired a number of  heroic and desperate cavalry charges. In this the Prussians were slightly luckier. The two regiments of Hussars charged through the now nearly empty centre of the French position - against one reduced French battery which they destroyed - and ended up doing a break-through charge against a second, which proved an entirely different proposition. 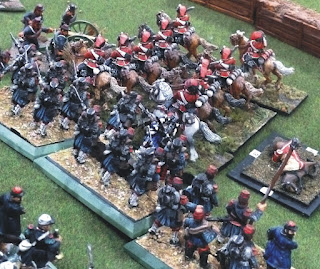 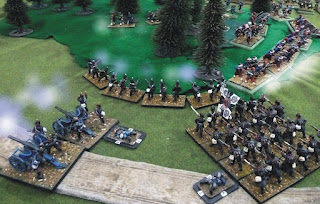 On the extreme French right they had run out of reserves to feed into the Neiderwald and with only three battalions of Zouaves and Chasseurs remaining, Dom's Prussians started to clear the woods. 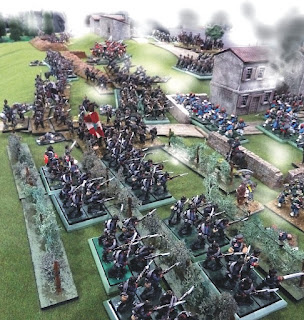 At Froschwiller Michael charged in his Prussian infantry, finally taking the vineyards and fatally reducing the reserve of Turkos, two battalions of which had moved up through the burning village under artillery fire to face a furious final assault. 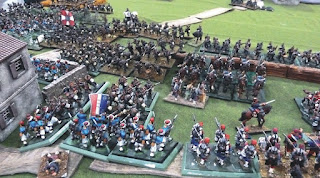 Doug had threwn everything forward in a last desperate attempt to break the Prussian attack but the second regiment of Prussian hussars and another of dragoons destroyed the remaining French guns and Doug's last infantry reserves in the centre.   Facing annihilation, the French in and around Froschwiller were eventually forced to withdraw. 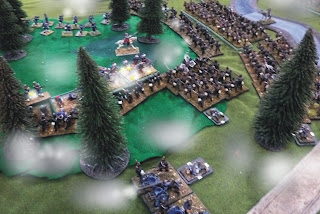 At the same time Dom's Prussians were finally successful in driving the remaining French out of the Niederwald - although at a very high price.  At the end of Turn 8 the French had two small units of Chasseurs and one depleated battalion of Zouaves left in the woods - but it had cost at least four battalions of Prussians destroyed to take the woods. 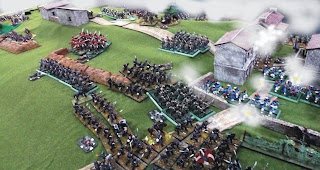 The final scene, Froschwiller.  The Turkos are holding out to the last - covering the French withdrawal.  (Doug) MacMahon's command is under the tree at the top of the ridge in the middle.  Immediately in front of him is a victorious regiment of Prussian hussars and to his left, another battalion of Michael's infantry.  Time to call it a day.
Eight turns of action and the battle in the balance right up until the last.  After fighting this twice now and tweaking the scenario & rules etc for this, its remarkable how close the final result matched the historical one.  The introduction of cavalry to the scenario was a good touch.  Historically they didn't have much to do with the battle - the most significant part was the trapping of the French Cuirassier inside the town of Morsbronn to the left of the Niederwald, where some 700 were massacred within minutes by close range Prussian rifles - which does not exactly lend itself to our little scenario!
Doug has masterfully condensed a huge battle directly involving two Prussian corps - the XI and the V - with the one and a bit French corps.  We couldn't quite match that number of figures but I think what we have managed to field worked well. At present we would have close to 500 pieces per side, which makes a Black Powder game of eight turns do-able.  Thanks go again to those who participated in our demo game in particular Dom (who helped test it out too) Mark and Michael.
I think that just about does it for FPW posting on this blog for the time being.  While I still have dozens of figures to paint, we don't plan any more games until CanCon itself next year, by which time both our armies will be completed.
Cheers,
Doc
Posted by Doc Smith at 1:11 AM