Just a quick post as I've been hellishly busy at work and home, with recent school hols etc etc BUT haven't entirely abandoned my FPW Prussian Army project.  Actually, all things considered its been rattling along quite well - I now have 10 battalions of 24 figures each completed and all the commands, with one extra for the Guard.  Quite happy with my Prussian Guard Regt. (x 3 bttns) finished.  Just two battalions of a Hesse-Darmstadt (Rhineland Confederation) regiment to do to make up a brigade with another regiment.  I'm also doing a small battalion of jaeger/light infantry so I can run them in either three brigades or two of infantry so that my FPW Prussians will roughly represent a full Prussian infantry division, accompanied with a brigade of cavalry and two artillery batteries. 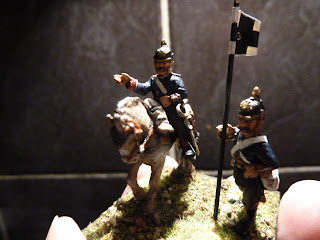 Anyway, my extra command stand.  The officer on the horse started life as an artillery teamster (Foundry figure of course) but got him another horse (officers, for the use of Meine Herr...) and with a bit of Dremel tool work to give him some boots and a proper Picklehaube (with pointy bit on top) and even a pointing arm (courtesy of a Perry's or Victrix Frenchman). We made him into fit and proper company for the good Feldwebel carrying the battalion headquarters pennant (bit of license there but I've got a pic of a 20th Century version).  Turned much better than   my rushed and poor quality low-light photography which does not do any justice to it. 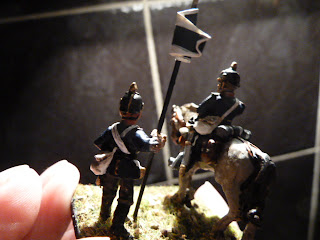 And the same from the back which is little better!  Note I had to leave the meal bag on him - but he's a sehr Praktische Prussian officer on campaign right? - and lucky to have a horse!

The Guard turned out nicely and I've given them the luxury of a command stand for each half battalion (i.e. every 12 figures).  I do like the Foundry figures of this range and would love to expand the division at some future date with perhaps a Bavarian or Saxon brigade. 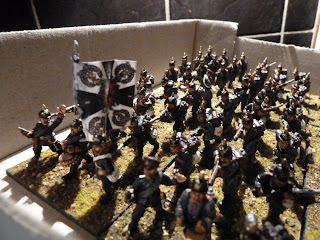 Guard-in-a-box (one battalion).
The photos of the three battalions of Prussian Guard are a bit blurry and dark or contrasty.  After I've finished my endless list of domestic chores that have accumulated lately I'll try and take some decent shots of the Prussian division so far. 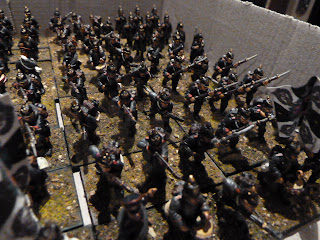 The rest of the Guard-in-a-box.
Well, that's about it for now.  Apologies for the lousy photography and my blogging tardiness of late.  The hiatus of our Kokoda campaign will soon be over too with the return of Allied commander Doug from foreign parts and we will soon be girding our loins again to present ourselves for another Banzai-bashing at the hands of our very numerous Japanese foes!
Cheers,
Doc
Posted by Doc Smith at 11:30 PM 4 comments: