I had intended to get stuck into my Bavarians and actually made a good start even finishing a small unit of jaeger but my Warlords order for my Bersaglieri army came in and I felt drawn to finishing my WWII Italians or the armour at least. The Warlord offer was too good to refuse - UK$75 for an entire army (4 x 10 man sections i.e. a full platoon plus command) including a support weapon and two armoured vehicles delivered - normally nearly UK$ 100 plus delivery. The order took a little over two weeks to arrive and Warlord very kindly put in a Sahariana AC instead of the Semovente (which I already had). The pack includes a set of Bersaglieri heads which are enough to make up nearly two platoons so I'm able to convert some figures I had to give the Bersa's a mortar as well as the MMG they came with. Naturally I had to make up the figures and vehicles as soon as I got them.  Very impressive they are too. Nicely caste figures with minimal flash (unlike the Perrys I have to say) and great detail. The AVs are resin and do have a bit of flash and crap to clean off (no different to the Perrys 'Blitzkrieg' armour) and the usual collection of fiddly metal bits that do require some patience in cleaning up and attaching with Superglue.


I've added a few bits and bobs to the vehicles including sandbags, Jerrycan rack and spare track for the M13/40 tank, a second Breda MMG, pickaxe and some packs etc for the Sahariana and an aerial for the Lince - which I think I've managed to snap off about four times so far! Also arriving about a week or so later were my three L3/35 tankettes from 'shapeways' in New York. Shapeways are a 3D printer mob who do a nice line of armoured vehicles. The finish is a bit rough but as the models are so small in 1/56 - 28mm its not that noticeable and at just under $AU 19 each not that expensive.  It cost me about $75 AUS to buy three and have them shipped halfway 'round the planet in about two weeks. Not bad at all.  I have to say they have an amazing range of 28mm AVs with dozens of variations to each model available. I settled for the L3/35 with the twin Breda MMGs and one with a Solothurn AT. Warning though - they are made in a  very lightweight hard plastic and are hollow and very light. In fact there's virtually no weight to them at all which led me to glue a couple of coins underneath and mount them on magnetic bases just to give them a bit more heft for the game table. 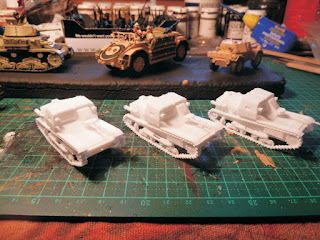 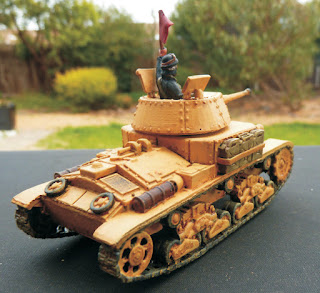 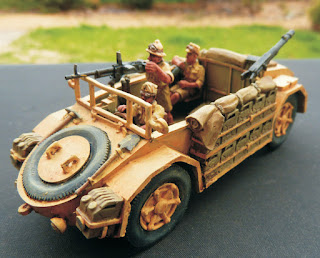 Of the models I've now completed I have to say the Sahariana is the one that appeals the most. I didn't realize they were so big - very wide chassis and huge tyres made them perfect for off-road desert ops to counter the LRDG in North Africa (dunno if they did ever encounter one another historically but that would make for an interesting game scenario!) because of their construction they came with a wide range of armament options such as the one  fitted with a 37mm Ack-Ack belonging to one of my wargaming companions that I posted on previously. Jason's Sahariana inspired me to acquire one and I decided to give mine the extra Breda MG it usually came with. Supposed to have a four man crew but usually 2-3, it could also transport six fully armed men. Luckily for the Allies the Italians only made about 100 of them as they are widely agreed to be the best vehicle of their type in the war - forerunner of the modern SUV? Its a huge AV - bigger than the M13/40. 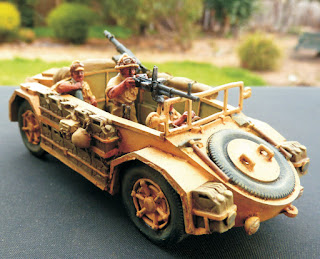 That's finished all my armour for the Italians - I now have to do just a platoon of Bersaglieri and one of parachustisti which I intend to turn into the famous Folgore who fought so gallantly at Alamein - another 60-70 figures with support weapons teams. Before I get to them I have to return to my Napoleonic Bavarians and finish that lot off and by then it'll probably be time for the 'Little Wars' con in October.

In addition to my own photos Andrew kindly sent me shots he and others had taken of the other games at Jost.  Featured are those superb French Foreign Legion as well as some very nice (and I'm told very successful) DAK, 8th Army and of course the Italians.  The end result of the ten(?) games played that day reflected history with heavy Allied losses but an overall victory (points around 39 to 47?) The DAK won several of their encounters but I think the Italians lost all of theirs - albeit very narrowly. Anyway, an enjoyable day's gaming at an excellent venue. Enjoy the extra photos. 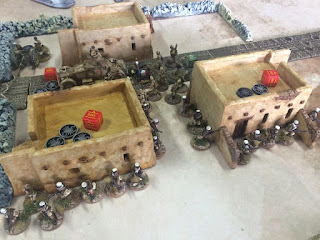 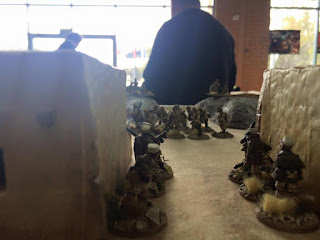 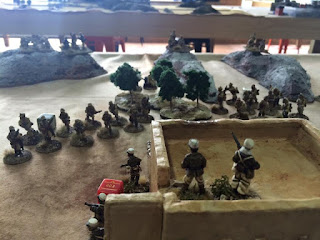 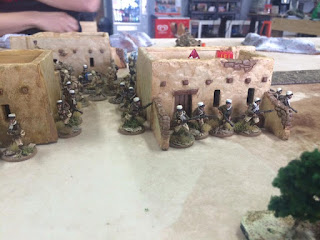 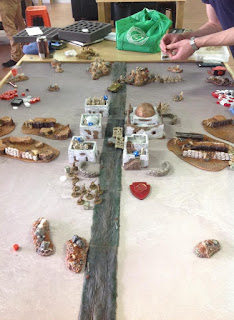 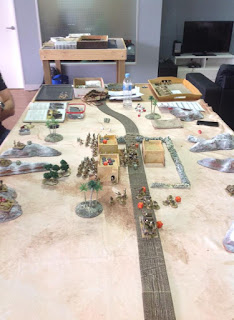 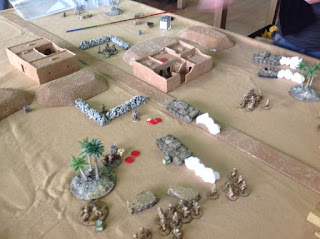 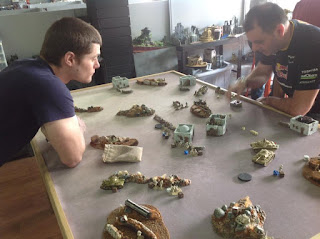 Thanks for looking. Off painting Napoleonic Bavarians for some odd reason - just tidying up my Bavarian Brigade when I 'discovered' I had enough unpainted figures for three more battalions! Clearly some painting has to be done.
Posted by Doc Smith at 8:24 PM No comments:

As anticipated we had a great time at the Bolt Action 'Escape from El Alamein' (Gaming the Breakout, October 1942) games event at Jolt Games. Having only played one or two BA games about a year ago I was in some trepidation going up against really experienced BA 'veterans' but fortunately my mate Andrew nursed me through the intricacies of the latest version of BA by acting as a sort of umpire for our game. He appeared to be on call in the same role for several other tables as well - in addition to his own game and being one of the chief organisers. Busy lad but he is the undisputed Bolt Action rules guru! I should also thank Jolt Games for hosting and providing the venue - which was really excellent with nice big tables and plenty of room - and even great coffee and snacks. If you're looking for a gaming venue in Canberra I can highly recommend Jolt out in Mitchell.

Amongst the sights were several superbly painted WWII armies: 8th Army, DAK, Italians (no, not mine - Bersaglieri - which I now have ordered from Warlord) but the pick of them were the Free French. These were some of the best painted figures I've seen for some time - absolutely superb.


The first game involved a dawn assault on an Italian fortified position with town, trenches and bunkers. The three objective markers were placed in the open directly in front of the Italian position, my Australians had to seize these in order to clear paths through the mine fields and open the way for the armour.

A daunting task given all my forces would be out in the open without protection. To give  them a reasonable chance the first two turns were done before daylight and there was a preliminary bombardment of the entire Italian position. Frankly all I thought it'd achieve is to keep the Italian's heads down for a turn but I rolled direct hits on three or four positions getting pins and for one Italian officer behind a bunker...
By Turn 3 it was deemed light enough to see but my opponent wasn't leaving that to chance, illuminating my main assault with a perfectly placed start shell which lit up everything within 18" in Turn 1! Mercifully he didn't have enough MGs and it was long range for rifles so his SMG armed paras couldn't do much until I moved into range.

The Italian firing when it did start to hit quickly whittled down my ten-man sections.  As it turned out my opponent did have MGs - mobile ones with his tankettes which carried two MMGs each (the firepower equivalent of an entire infantry section) but knowing how vulnerable they are my opponent was very reluctant to risk them until late in the game, which was lucky for me for when he finally did one tankette wiped out the remainding half of one of my sections. MGs hitting my men in the open would have made for a very short game in my opinion.

Veteran Italian parachustisti entrenched and in bunkers etc, are extraordinarily hard to kill. Their characteristics mean they actually do fight to the last man and bullet and so the 1st game went right down to literally the last roll of the dice. We had lost three or four units each and in order to get the win I had to roll a six which after some spectacularly lousy rolling to hit, I plucked one out of my derriere on the very last roll of the game.

The second game was a much different affair with my Italian opponent's veteran Bersaglieri bundling me out of the town (the objective) in no time. I found two annoying things - you have to shoot them down before  they get close enough to assault as the attackers get an extra point in melee to defenders in a building - the exact opposite of most other rules I've used. I must say I don't quite get the logic behind that or the big oversight (in my opinion) of not allowing for grenades at close quarters before an assault (as in Chain of Command) but while annoying, didn't spoil the game or affect the result in the end.

Despite these shortcomings my genial opponent Luke played it very well - keeping me guessing where his armour was coming on - right behind one of my flanks of course. Unfortunately Luke could only get two of his three M13/40s on - which was very lucky for me as I was completely committed to trying to retake the town with my reinforcements and all my armour.  Right at the end I had used the Dingo armour command car to spray the house next to the now flaming Cruiser. But as I had discovered its very hard to kill veterans in an Arab mud-brick and their return fire saw a very rapid use of the reverse gear! At the same time the Solothurn AT put many hits into the side of my Stuart Honey - amazingly the crew managed to prevent the tank from brewing. That, wiping out the Italian AT gun and saving my command Dingo AC plus managing to retake one house/objective (one was still held by the Bersaglieri at the other end of the town) saw the game called and me get an arsey five-four win.
Again another battle 'down to the wire' - don't believe the Italians are easy-beats by any stretch. Good troops well-handled could have beaten me both times as I actually lost more men with two entire sections wiped out in each game.  A great day's gaming in congenial company with fun had by all.  Thank God - my first since last year! Looking forward to the next one.
Posted by Doc Smith at 11:41 PM No comments: