Some more Austrians (not running away!)

After the hassles with images on the last post I didn't post the photos I'd taken of my recently completed Austrian Landwehr.  I think I've narrowed the problem down to the way Microsoft Picture Editor processes the edits on your images which can go topsy-turvy or distort when posted on Blogger.  Its not a problem I had exporting images to my blog using my other pic editor program Corel - fingers crossed it won't happen again with this lot!

I just finished the first batch of my recently acquired Perry's plastic Austrians which I have photographed experimentally with my newly constructed photo box.  Beautifully sculpted figures of course, easy to put together. My only criticism is that with the torso and arms molded as one, the only variance you can get is with gluing the head on i.e. not much!  This is somewhat compensated for by the three main headgear variants to each sprue, namely the helmet, the shako or the 'Korsehut' - a funny type of slouch hat worn by the Landwehr and Jaeger troops - and the useful addition of one head on each wearing the undress cloth cap. 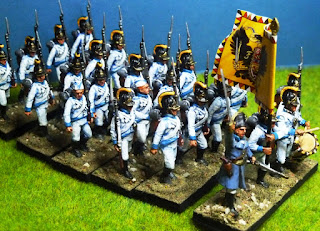 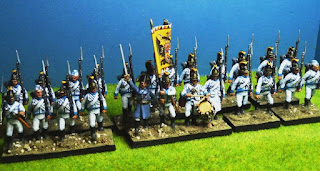 I quite like the command sprue you get with the officer accompanied by the ensign, 'Zimmerman' (pioneer) and drummer.  Again not a lot of variance possible apart from the interchangeable heads but a nice little command set and the officer in his uberfrocken looks quite dashing.  This latest have slightly more raised detail which makes them somewhat easier to paint.  With 44 marching infantry per set you can make up quite large Black Powder style units (which was the intention I think) and flesh out your existing ones if, like me, you find yourself with a temporary excess of command stands.  Although 28mm, they are a skinnier figure and still fit in reasonably well with many/most current makes like Front Rank etc. 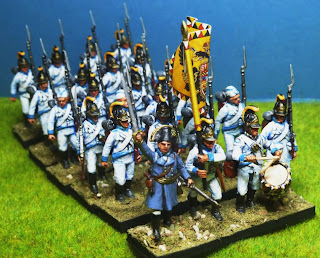 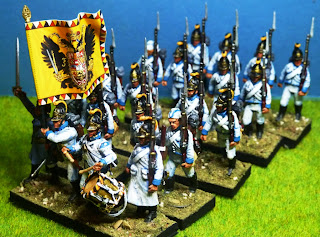 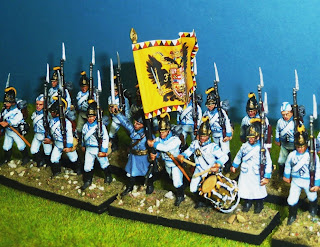 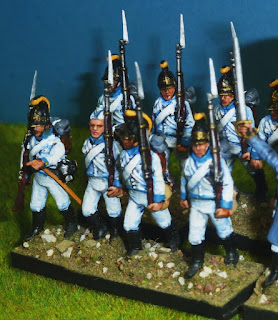 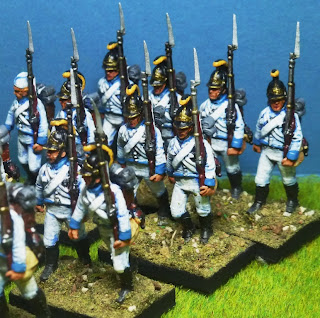 As you can see in the above detail shots, you also get a couple of  NCO figures - their the ones with the long canes hanging from the front. Another nice bit in the box is the instruction sheet with some quality flags and the uniform colour schemes for all the German regiments, Landwehr etc.  I've painted mine as the famous Infantry Regt. No.4 'Hoch & Deutschmeister'.  They also held on to their beloved 'lederhelm' for most of the Napoleonic War whereas most other German regiments changed over to shakos after 1809.

I've still got about twenty or so figures to finish for the German regiment but the other unit I'd finished is the Victrix Landwehr (done up as battalions of the Vienna Volunteers - the heroes of Ebelsberg).  I admit to being a bit skeptical about them because of their big cartoonish features but they actually turned out pretty nicely.  They are big (closer to 30mm) but still fit in with makes like the Perrys. 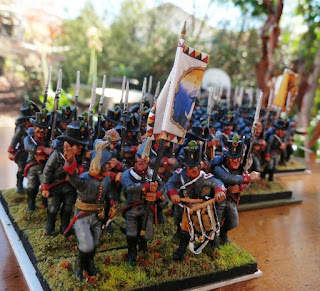 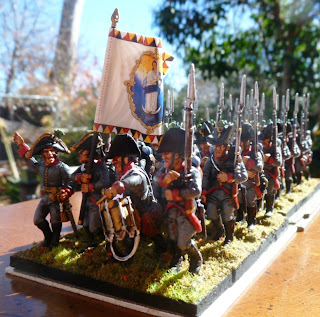 Another thing I like about the Victrix is the nicely detailed and colourful flags that are included with the instruction sheet.  I think they are actually better than the Perry's version. Both provide the Liebfahne (regimental or colonel's flag) and the Ordinarfahne (the standard yellow line infantry flag). 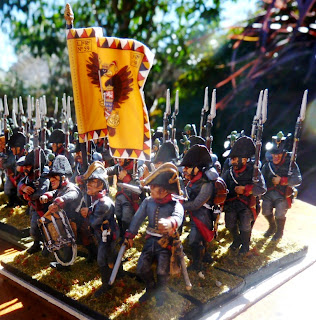 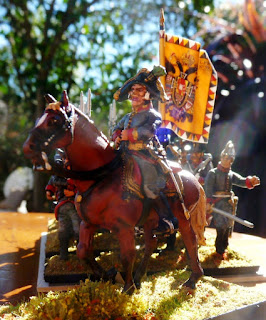 I have to say you also get more stuff particularly command figures in the Victrix box including two mounted officers.  The horsey is a particularly nice sculpt and all the bits fit together well which is good as Victrix are a darn sight more fiddly to put together than Perrys.  On the plus side the more stuff to glue gives you more options for variety, noticeable with a 50-figure unit in marching pose. But wait - there's more!  No set of steak knives but options for having up to a dozen or so of your figures in loading, shooting/skirmish mode - so another one up on the Perrys there too. Being plastics there is always plenty of scope for conversion and I made up an NCO (with his Cane of Authority!) and another drummer to give an extra command stand to the Landwehr. 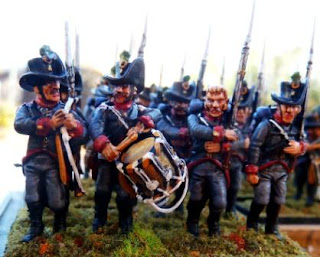 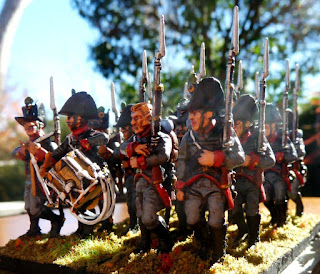 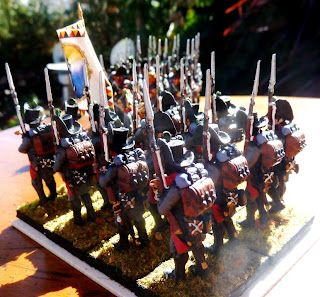 In fact I have enough extra figures from both boxes to make two full (32-36 figure) Landwehr battalions.  I had thought of two 48 figure ones but that's just a bit too excessive (and too much bloody work!)  Besides which I have Austrian grenadier, hussar and artillery units still to do, so can't waste time on more Landwehr. 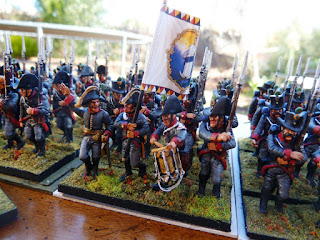 The figure I like the most out of all the plastics is the mounted regiment Colonel (Inhaber) - he's a great looking figure so I've lavished a bit more time and attention on him. 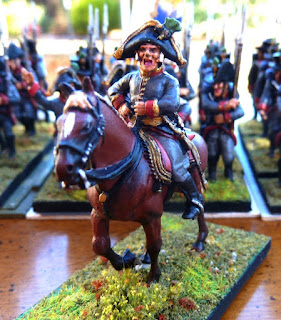 I still think outdoor photography gives the best results although I'm happy enough with my new photo box too for indoors, a necessity this time of the year in the Southern Hemisphere.  I'll do a lot of things for the hobby but risking frostbite to get that perfect shot ain't one of 'em!

This 'retirement' lark is a bit different from expected.  Rather than more blogging time as you'd reasonably expect, on average its less - heaps less - as there seems to be long periods when I don't have a hope of getting to the blog.  I try and make up for it with similar intense periods of figure painting - although they too tend to be infrequent.  Still, shouldn't grumble as I pull a pension and get to sit on my arse painting and blogging, blogging and painting - on occasion - which is better than many can boast I'd imagine.

The painting list is a very long one and I've actually leapfrogged between one period and another - all over the place - as my fancy takes me.  It tends to be dictated by available time and things I am actually enthused about, rather than others I ought to do.  In this regard as lately I've been getting into Napoleonics again after a long absence, I have started with re-organising my armies on a Black Powder basis which means much bigger units. I've utilizing some of the non-standard figures that I've obtained recently or had hanging around for ages looking for a home and making up the dozens of casualty markers you need for a good old bloody BP stoush!  I've been helped here by using some of the new Perry's casualty figures from their rapidly expanding Nap figure lines.  I've also combined them with some old Foundry figures I've acquired.  Breaking with convention, I've used them to construct a few stands of figures as well as casualty markers.  Not unhappy with the results! 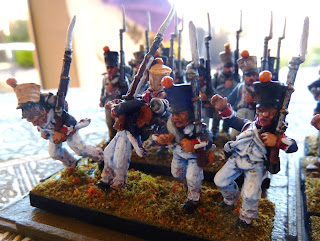 I like the range of new Perry casualty figures, particularly the one of the grenadier carrying his unconscious comrade.  There is another with the the figure seated on the ground holding his musket in one hand and (wounded) leg in the other which is also a nice figure but the photo of him didn't turn out unfortunately. Actually having some problems with the photos I edit in Microsoft - they flip around the wrong orientation or distort sometimes - but only notice after you post on Blogger. Stupid bloody thing - never had the issue when doing them in CorelDraw - or Photoshop.