Today was something special being the ANZAC Day commemorating 100 years since the fateful Gallipoli landing.  It was a very moving Dawn Service at the Australian War Memorial with an amazing crowd of over 120,000. That's one in three of the entire population here in Canberra. Like some I have a personal connection with Gallipoli with at least one or two of my great uncles serving there. I recently rediscovered an old photo of one of them taken at Brighton Camp in Tasmania in 1914. I know very little about Private Smith although quite a bit about my grandmother's three brothers (and her father!) who served in the Middle East in the 3rd Light Horse, on Gallipoli in the 24th Battalion then on the Western Front where one of them won the Military Cross. Another of my ancestors was in the Light Horse at Beersheba where he 'found' a number of maps in the Turkish HQ, one of which we still have after restoring it for my father some years ago. It hangs in pride of place in his study.  I remember as a kid seeing the other maps in the hand of a Turkish officer model in the old WWI exhibition at the War Memorial but they're probably long buried in the archives somewhere. 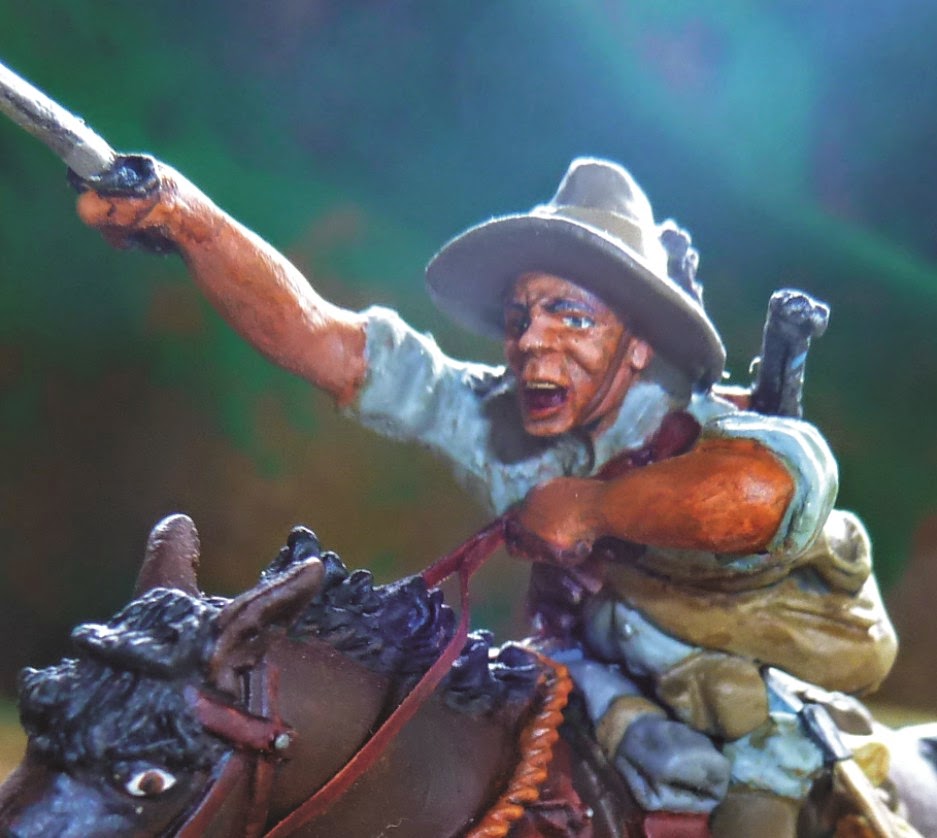 I also made several figures of Tasmanian Light Horsemen - one mounted (charging at Beersheba?) and the other charging on foot (landing at Gallipoli?)  These are Australian made 54mm figures and not too bad as such figures go - although nothing of the quality of the Perry's that have been done for Peter Jackson and are now part of a magnificent exhibition of Chunuk Bair in Wellington which contains over 4,000 figures. More pictures of this amazing multimedia event devised by Jackson including the actual diorama can be found on the Perry website and Facebook page as well as its own blogspot by the redoubtable Roly Hermans. After seeing Jackson's short film on aerial warfare on the Western Front at the Australian War Memorial I have no doubt the ANZAC Commemoration in Wellington will be nothing less than spectacular.

Had thought to add a few more links but as I can't make Wellington this year, I will visit the new WWI exhibition (completely revamped including all the old dioramas) at the AWM and would encourage anybody in or visiting Canberra to do the same. Apart from the incredible military history depicted, it is an enormously moving tribute to all those thousands of young men and women who fell in war for Australia.

I have some photos of the finished Mamelukes but I may save them for a future post rather than this one.

PS: I've just updated the links to the Chunuk Bair exhibition in Wellington as Roly has posted photos of the brilliant finished diorama. Hats off to our Kiwi brothers (and the Perrys for their magnificent figures etc) and Peter Jackson for a brilliant tribute to our ANZACs.