Chain of Command test for the Galatas game (Crete) - another balmy Sunday down t'club!

OK perhaps 'balmy' is a bit of an exaggeration - it is the middle of winter here - but any Sunday down t'club wargaming is a good Sunday!  Fellow bloggers may be aware that we are putting on two WWII games - Galatas and D-Day's Pegasus Bridge - using the Two Fat Lardies brilliant 'Chain of Command' rules at Canberra's 'WinterCon' wargaming convention next month. Having only played the rules once before, my wargaming mate Andrew decided I needed to be edja-ma-cated in using CoC for something complex like a para drop. Very good idea as I hadn't a clue!

The Galatas scenario involves a German parachute drop during the Crete campaign (Op MERKUR - Mercury). In our game the Germans parachuted onto some very annoyed New Zealanders and some even more annoyed Greeks (we made them a native Cretan unit which made them very angry indeed!) Given the Germans specialised in low-level jumps (usually from only a few hundred feet), they couldn't control the direction of their chutes (unlike Allied chutes which had guide-lines, the German version was a harness job from which they dangled helplessly) and some other bright spark had the idea of dropping their weapons in a separate canister, so essentially unarmed and dangling helplessly for a minute or two - a very risky venture!. You'd think it would be a recipe for disaster (and historically - you'd be right!) so to balance things up a bit for gaming purposes, the Germans have the element of surprise and get to go first without being shot at (for the first turn anyway). 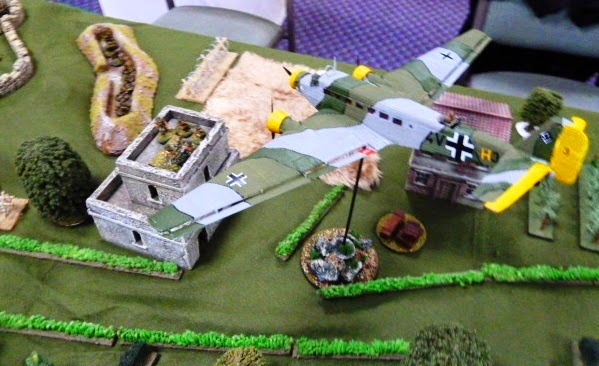 The morning calm is shattered by the roar of the German trimotor JU52's sweeping low over the village.  Fortunately the German's sudden appearance caught everyone napping, especially the Vickers on the rooftop, otherwise things could have gotten very ugly, very quickly! 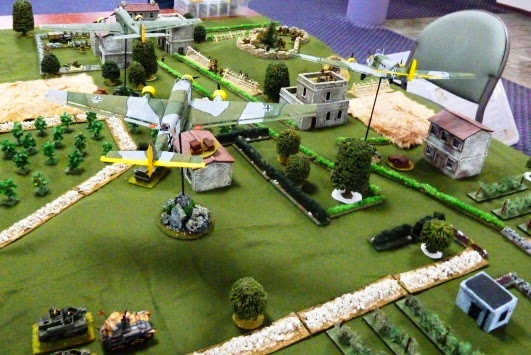 The three JU52s come in at barely 500 feet above the village to drop the first sticks of paras.  The drop points are placed and then diced for (1 x D6) with a scatter dice to see where they actually land. You do this for each stick in each plane and repeat for the weapons/ammo canister. This is the first hurdle as you only have one chance in six of landing in the same place as your weapons! True to form, out of six jumps only one landed next to their weapons! Depending on how you go with your command dice - the landed paras first action is to race for the weapons containers! Remembering they have nothing but sidearms and grenades. Basically, if they did not have the element of surprise, they'd be slaughtered. Here I had a bit of luck too. Some paras dropped with their MP38s (in defiance of standing orders!) but you have to dice to see which do.  My battalion command stick jumped directly in front of the house with the Vickers and fortunately two of the four MP38 armed Jaeger jumped with theirs. Ordering them to fire at the Vickers (only just in range!) I rolled for shooting and rolled double sixes followed by another two boxcars!  Two hits and two kills on a five man section. I can't remember the last time I rolled so many sixes. Never happens to me. And with para jumps - ya gotta be lucky!

The first firing of the game probably saved my bacon for if the HMG had caught me in the open with 10 dice (hitting on anything but 1 or 2) - it would have been a more 'historical' result with another para battalion command wiped out!  As it was it gave my command stick time to get the weapons and into cover.  All save for my mortar section which didn't manage to hit anything before they were taken out by Andrew's Vickers light tank - which always threatened to run amok before my AT team had a chance to land. The stick from the second aircraft likewise landed adrift from their weapons but fortunately far enough away from the Kiwi defences to survive the  two turns  it took for the dawdling paras to reach them!  Again luck with the third stick - they and their container landed bang on the same spot.  They came under fire immediately from the Kiwis but being in 'soft cover' (chest high field of flax or possibly teddybear fur!) managed to avoid serious casualties.

The first section had landed with their weapons container and its here that the German paras - hitherto virtually unarmed - acquire and get to unleash their firepower.  Given the number of automatic weapons per section, that firepower can be awesome.  They dropped with the HMG team, who quickly opened up on the Kiwis opposite, adding their firepower to the para section.  The Kiwi section opposing them was whittled down over two turns, survivors ended up with more than twice the number of shock, so I had the choice of taking their surrender or letting them bolt. Given the circumstance and because I couldn't afford a man to guard them, I chose the latter. But things didn't go all the German's way as a second section of Kiwis emerged from the village and charged into the para's flank.  In the fierce hand-to-hand that ensued, each section wiped the other out. 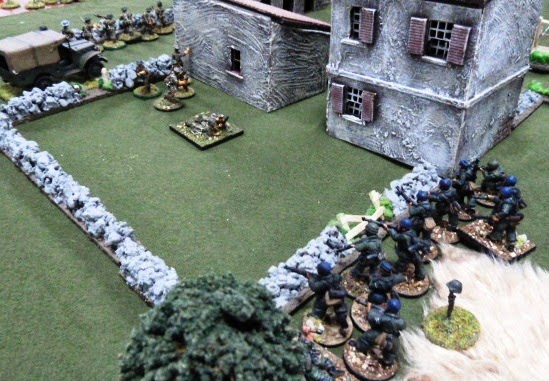 The first German section closest to the village was wiped out and the second had still to acquire its weapons so Andrew's Kiwis advanced again towards the stone wall to take out the HMG team. But a good command roll enabled my choice of another para drop or air support.  I chose the latter and called in a Stuka - a bit of aerial artillery to pound the Allied troops in the village. Caught in the open with a 500lb bomb, the advancing Kiwis were devastated, losing 4 out a ten man section in one horrendous blast.

The Stuka still had two 250lb bombs to drop and looked for fresh targets. At this point the Greeks in their fortified position on the hill came in for attention. Again you have to dice for the accuracy of the strike and one of the bombs went wildly astray - closer to hitting their own than the hapless Greeks. But one 250 pounder found its mark. At this point the Kiwis had had enough, having lost all but one section of infantry and their Vickers tankette, morale fading fast they withdrew, leaving the Greeks on the hill to hold out as long as they could. 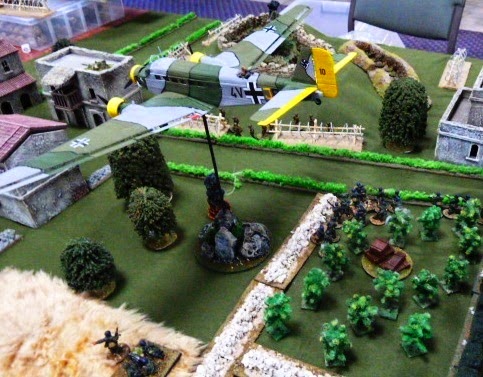 The last sticks of paras land in the second wave. One in the olive grove only a turn away from their weapons but the other much more perilously in the open ground in front of the Greek trenches at the foot of the hill - separated (of course) from their weapons.  With the second wave the element of surprise had been lost so that the thoroughly alerted Greeks immediately opened up on the virtually unarmed Germans sprinting for their weapons container which had helpfully landed right in front of the Greek position!

Caught in the open, the Germans had replied with their one MP38 and a shower of grenades but their squad leader was one of the first casualties and they ground to a halt in front of the Greek trench.  Fortunately there was enough command to have the battalion commander order the leutnant to take over and get them moving again - in the nick of time!

On the other side of the road the now armed sections assembled behind cover to work out how best to assault the hill.  The Greeks behind the wire at the foot of the hill opposite were not entrenched and soon were targeted by German fire and wiped out.  They didn't run, as you'd expect with green troops, but fought back even though they couldn't hope to match German firepower. Brave lads took a few Nazis with 'em!

One of the many things I like about the rules is the realistic use of of tactics - I used my HMG to lay down a suppressing fire to enable the paras to cross the road and assemble for the final assault. The Greeks had two SMGs at that corner of the defence, supported by a Vickers HMG behind it, trying to keep the German's pinned in the trench at the bottom of the hill. In order to shoot at the Germans assembling for the assault at the bottom of the hill in front, the brave greek gunners had to expose themselves, but each time them popped their heads up the HMG and LMG opposite poured fire into their position.  In spite of inflicting more casualties (yet another Korporal copped it - I was starting to run short of NCOs!) the suppressing fire was awesome and wiped out the Greek SMGs.

The final German assault saw them make the top of the hill and using the cover of the entrenchments, pour fire into the remaining Greeks inside.  The Greeks at the bottom of the hill became pinned after their brave but fruitless charge and were forced to surrender. The Greeks in the fortified position atop the hill were the last remaining Allied unit on the table so at this point we called the game in favour of the Germans.

Big thanks to Andrew for his patience with me as Chain of Command paduan-learner, particularly as he was suffering from a winter lurgie too!  Just as well the club has a bar and great counter lunches or we'd all just fade away from such dice and lead-shuffling extertions!

The Greek figures in the above are actually WWII Greek infantry - not converted Italians - made by Rif Raf Miniatures. I believe our use of them is a world first as they are yet to be released. Really nice figures, size-wise they fit in well with the Perry's figures. They are armed with a mixture of Allied (French and British) weaponry and even a Krupps gun (although not for this game) just as they were historically. (Most of the poor Greeks on Crete were very poorly armed as they had lost much of their weapons and equipment on the mainland.) The new Rif Raf Greeks will be featured in our 'Battle for Galatas' at WinterCon 2014.