More French in the Orient - this time WWII and the Levant 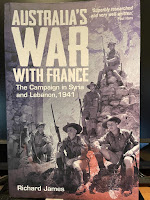 Nearly 80 years ago - six weeks from June to July 1941 to be exact - the Allies fought a brief but vicious campaign against the Vichy French colonial territory in the Levant (now modern day Lebanon and Syria). In this short conflict the Allies prevailed but at a cost of over 1,000 lives on either side including over 400 Australians. To put it in perspective that's ten times our losses suffered in Afghanistan in over ten years but in just six weeks! Yet it is virtually unknown, coming as it did just after the disastrous campaign in Greece and the unsuccessful defense of Crete (German airborne assault Op MERCURE) and before Tobruk and El Alamein. And of course by 1942 when these troops were pulled back to defend Australia and fighting for survival on the Kokoda track. The entire episode in Syria and Lebanon was quickly forgotten which is a pity as the achievements of the Australians were as impressive and courageous as any of the better known battles in WWII.  The French they were up against were a formidable foe. The French colonial Army de Orient were well-led, trained, equipped and highly motivated - which came as a great surprise to the British commanders who had expected little (if any) resistance.  This episode would have likely remained in obscurity, unknown outside the official (Australian) military histories (as I did in the AWM's Vol II 'Greece, Crete and Syria' of Australia in the War of 1939-45 published by the Australian War Memorial in 1953 on my father's bookshelf!) but for a masterful retelling of the entire thing by Richard James in his 'Australia's War with France - The Campaign in Syria and Lebanon, 1941' (Big Sky Publishing 2017).

But I know you lot didn't visit Doc's blog for a history lesson so here are the figures and models I've done up to represent the Vichy French the Australians encountered. The first cab off the rank is a great little 1/72 model (Hobby Boss - a Chinese firm) of a Vichy Dewoitine D520 fighter. The French air force was well-equipped with fighters and bombers that were easily a match for the Allies, and the French pilots gave good account of themselves downing two Hurricanes and strafing Australian convoys on the coastal road near the Litani River.  The Dewoitines were the best French fighters of the war. Colourful too! 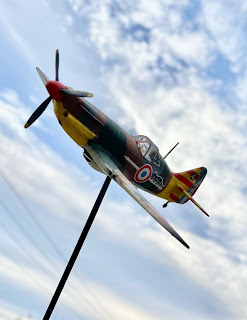 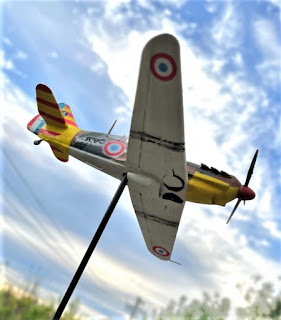 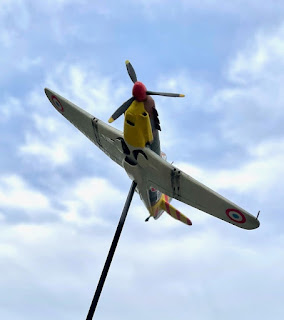 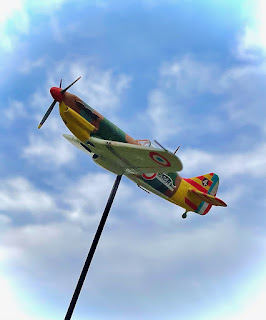 The French colonial Army of the Levant was also a colourful one: "...an amalgamation of French Foreign Legion troops, regular French army troops, colonial troops from North Africa [and West Africa] and local troops." (James, p120). The Legion were four battalions of the 6th Regt Etrangere, the regulars were three battalions of the 24th Mixed Colonial Regt. - Frenchmen supplemented by Senegalese - and some 13 battalions of African Tirailleurs (light infantry rifles from Algeria, Morocco, Tunisia and Senegal and a dozen or so local (i.e. Syrian and Lebanese) battalions - there was even an Indochinese 'Construction' battalion! In addition there were some 2000 Spahis light cavalry (from Algeria, Morocco - even local Druze and Circassians!) mostly mounted but also in lorries and armoured cars. Piece de resistance of the force were the two armoured regiments, the famous 6th and 7th Chasseurs d'Afrique equipped with 90 of the latest French light tanks including the Renault R35s - for which the Allies initially at least no answer as their armour was too thick to be penetrated by the British Boyes AT rifles (save at point blank range or from the side or rear) the Allies had. Allied 'armour' consisted of armoured cars (mostly Herringtons and older Rolls Royces) Vickers light tanks and Bren carriers i.e. usually no match for the French! 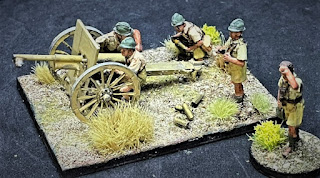 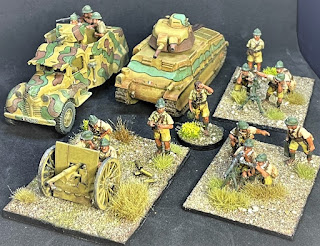 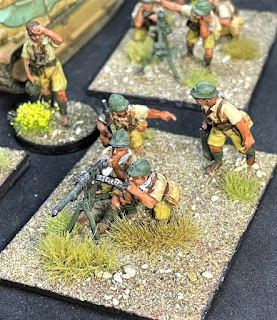 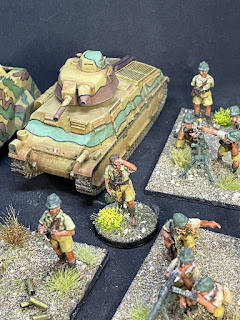 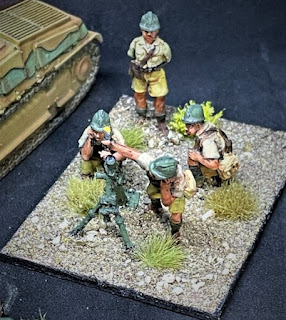 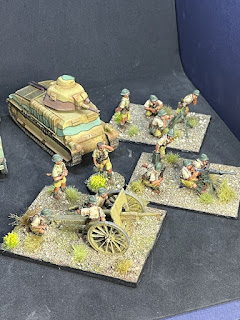 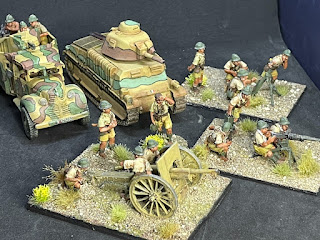 The figures are all Perry from their WWII range and armour from the associated 'Blitzkrieg'. The latter include a Dodge 'Tanake' armoured truck sporting a 37mm gun and at least one Hotchkis LMG and a Somua S35 with a 47mm gun. Although the Somua's were sent to Africa including to equip the Chasseurs d'Afrique  they appear to have been with Vichy forces in West Africa and Tunisia and not in the Levant, although I haven't been able to confirm this. Bugger. It was the only French tank available I could get my hands on! Fortunately also available was a nice 75 gun and Vichy crew.  The Tanake is a particularly nice model. About 30 1&1/2 ton Dodge trucks were converted into gun truck/APCs by the French and used by both Vichy and Free French forces in the Levant and North Africa. 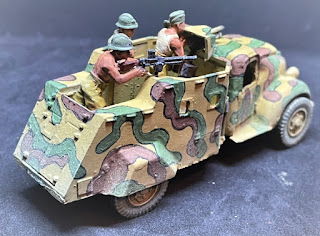 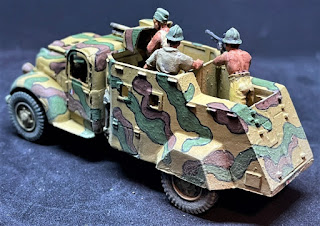 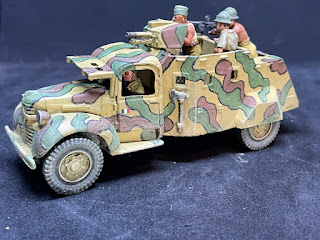 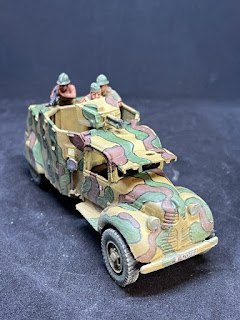 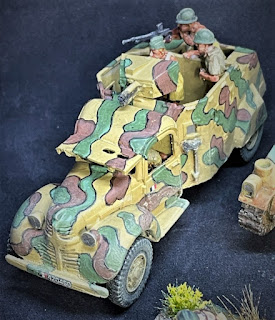 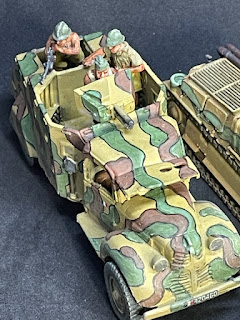 Although I haven't photographed the French and Senegalese infantry yet but will post them in due course. I also have the British, Australian and Indian units (and armour) that fought in the Levant as well. I've tried to put a scenario together for this but will need to put more work into making a proper Chain of Command Early War campaign. 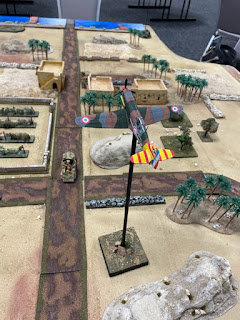 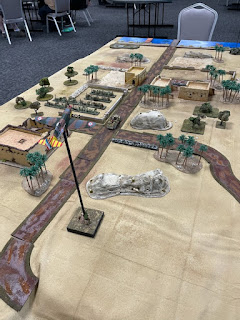 The blue at the end of the table represents the Litani River the Allies had to cross at the start of the campaign. I'll have to come up with some proper lists of what was available to respective commanders. It will certainly be a challenging game or two to recreate on the tabletop.
Between that and currently finishing off my 1914 BEF (British cavalry done, halfway through a Scots unit, dismounted and command still to do) and Germans (German mounted finished, dismounted Uhlans and Command still to do) I daresay I will have my hands full!
Posted by Doc Smith at 12:23 AM 6 comments: