Come Fly With Me... and the second Greek campaign battle on the Albanian frontier.

A Merry Christmas and Happy New Year to all the followers of Doc's 'Art of War'. The counter thingy tells me its clicked over 150,000 views which is, I believe, a milestone of sorts for this little blog so again, thanks to all who've taken the time to visit and especially comment on my eclectic wargame activities.  This year has been pretty ordinary with the loss of Bowie, Prince, Ricky Parfit (Status Quo) - great muso and a thoroughly good bloke BTW - and then to finish off the indomitable 'Princess Leila' Carrie Fisher (followed by her mum Debbie Reynolds) - and a host of others. Dropping like flies they are so it'll be good to see the back of 2016!

I thought I'd sneak in one last post for the year - a bit different as I'm more a figure collector / gamer than model-builder BUT as it involved my growing WWII collection I thought I'd show a few of my recent aircraft.  I've got a decent selection of German aircraft - JU52, JU87 Stuka, BF109 and ME110 (next will be a JU88 to complete my Mediterranean theatre Luftflotte) but wanted to finish my Italian airforce.  I had my little Macci 'Arrow' fighter but needed a heavy/ground attack fighter-bomber so just finished an S79 Sparviero trimotor. Absolute bugger to build (snapped the cockpit canopy in two and spend hours on hands and knees hunting for and invisible piece of clear plastic on a grey carpet...) but the end result was worth it. Just have a CR.42 biplane to finish and the Italian Regio Aeronautica air support for the Regio Esercito for Greece and North Africa is done.

And (below) with his escort, somewhere over the Albanian 'badlands' or Libyan desert. 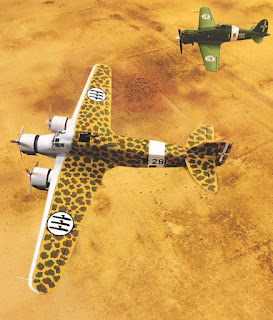 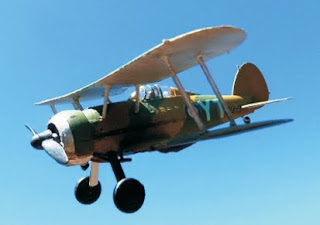 After I took a few shots I decided to do a few more 'pairings'. As I have already posted on the Gloster I decided instead to do the Hurricane (that replaced them) for a 'somewhere over Greece' shot with the Blenheim, using my home-made desert battle mat as a backdrop. 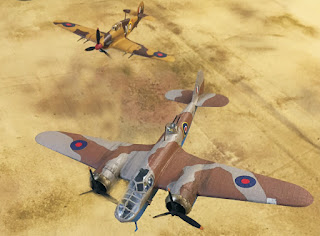 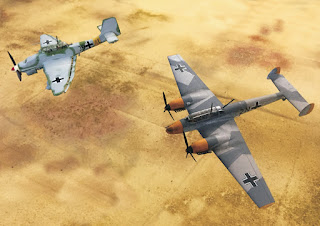 JU87 Stuka and ME110 over Doc's desert battle mat (and maybe a little bit of photoshopping to rub out the air stands). And last but not least, perennial favorites the Heinkel and ME109 escort. 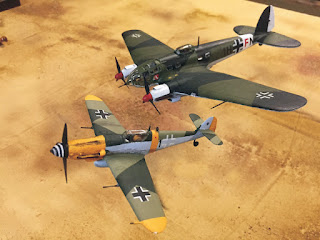 We had a game at Jolt in Mitchell before Christmas - the second of our Greek Campaign.  My Italian army has invaded Greece from Albania and at the same time as a lightning advance by Italian armour along the coast, a second thrust is being made in the mountainous north by Italian infantry divisions. Now I spent plenty of valuable points on an Air Forward Observation Officer (75 out of an 800 point army for a single figure!) but unlike the first game didn't get to use him as I left it too late and we ran out of time.

There was not a chance of the whitewash of the first game with Mark's horribly outnumbered Greeks being pummeled by  artillery, air and armour - this time they were in a heavily defended frontier in one of three(!) indestructible pillboxes (also the Italian objectives!) or behind stout (Greek) stonewalls - and only outnumbered 2 to 1 by attacking Italians with NO armour (yikes!)  I thought I had offset this by bringing along a Canone da 75 but that didn't survive two rounds before being taken out by a Greek howitzer (WWI Austrian issue!)

First game of our BA2 Greece Campaign and going for Baroque at the Club!

Mate Ian at the club last Wednesday chided me for yet again neglecting my blog and not posting for weeks - and clearly spending way too much time on #@$%ing Facebook. Guilty Yer Honour! To make amends I'm posting on not one but TWO games I had recently.  The first was my introduction to Bolt Action Ver 2 - which rules we tested out at 3D6 in Tuggeranong. Now I always give a decent establishment a plug as well, hence the link and this one to their nicely done pub next door, the Loaded Dice which has a decent bar and hot food reasonably priced mere steps away from your gaming table (food delivered while-u-throw dice!) 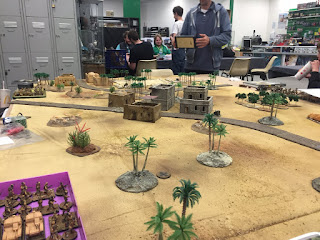 The first game was several weeks ago and featured by LV33 tankettes uncharacteristically successful and my Bersaglieri getting into all sorts of trouble in town. No matter as the purpose was to get use to the new revised version of BA - which is a quantum improvement over the first IMO.

A rather good table with my very own 12' desert battle mat made from a canvas drop cloth from Bunnings (all of $24 - the rubber backed ones are $36 but better mats).  The second game of BA2 also went well as the first of our Greece Campaign series. In this as Italian commander I am taking a rather un-historical tack by successfully invading Greece from Albania along the coastal route.  It is a surprise move so the poor old Greeks are heavily outnumbered by Italian armour, mobile troops, artillery support and even air cover.  My opponent Mark put up a game fight (note to any Italian generals: avoid hand-to-hand with Greeks!) but pounded by a preliminary artillery bombardment (which also heralded my rolling of more boxcar D6 for any game in living memory!) which absolutely hammered the Greeks who had no defences other than a solitary bunker with an AT gun in it - an almost impossible nut to crack as it turned out. 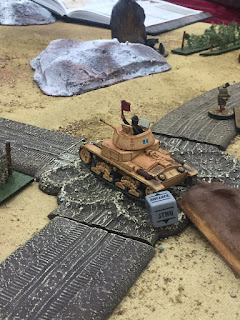 Even the Italian tanks performed well... mostly. One copped several hits from the AT gun in the bunker and refused to go anywhere but the other two used their plentiful MGs to hose the Greek infantry among the grapevines.

Mark's Greeks were plenty tough - twice they had to be taken out in hand-to-hand and even hugely outnumbered, inflicting as many casualties as they suffered in the process. Like the Japs, you do NOT want to get into fisticuffs up close with the Greeks - they'll hurt you every time!

The second wave of Italians, regular infantry plus supports, were most reluctant to come on before all the fighting was done, so just in time for the awarding of medals.  The Greeks bunker was a true beast which was impervious to everything thrown at it. To kill anything in the bunker you literally need to roll three 6D6 in a row, otherwise the only way to take it is with infantry assault. That's hand-to-hand. Against Greeks. Not good!

The game at 3D6 was really enjoyable and we got through four turns in three hours as we became more familiar with the rules. Mark's Greeks put up a credible performance considering the odds stacked against them but the next encounter will be in the mountains to the north and they will only be outnumbered two to one next time - and no tanks!

At the Lanyon club last Wednesday Doug and I finally had that TYW game of Baroque ('Europe At War 1550 - 1700') we'd been promising to do for months. Its an unusual Impetus-style rule system that reduces things to simple mechanics rather than multiple factors, so once you get used to how it operates, the game flows and its quite enjoyable. 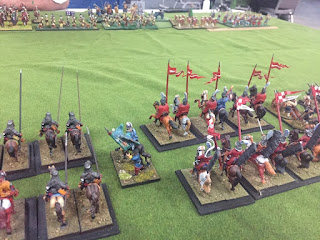 Unlike other systems it does not require hordes of figures, which is also useful. Two 650 point armies going at it will give you a good three hour game. Doug fielded his Ottomans and I my Poles taken from the Baroque lists. The only criticism is that artillery seem completely useless. You really don't need to spend the points on them as they do very little anyway. I realise that artillery were not as effective during this period but I think they probably go too far the other way (I may be a bit harsh here - if you buy a Master Gunner they are more effective). No matter - it doesn't spoil the game and the combat is, as it was at the time, rather brutal! 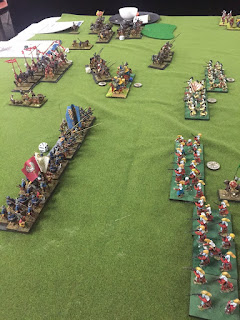 After running out of time the infantry on the right didn't really get engaged.  The Haiduks volleyed the Ottoman bow (Anatolic skirmishers?) into oblivion but Doug's advancing Janissaries were unable to get to grips with the Poles. On the other flank Doug's Ottoman Dragoons (lurking in the rough) were destroyed by a rolling attack - effectively a caracole by the Reiter and one of the Pacerni units - who rode up to the edge of the rough, fired then were replaced by the next unit etc. With Doug's entire right wing (a third of his command) gone it was a convincing Polish victory  BUT Doug generously explained how the rules worked and I got lucky dice when I needed them.  After a frustrating start where most of my units failed their initiative several times while Doug's entire right wing division advanced, I got lucky with the melees. All in all an interesting game to play and - importantly - gave me the excuse to get out armies I haven't played in years. Great fun. We'll be playing more Baroque in the future.

'Pulled' the post for a final bit of editing as I just noticed the counter has turned over 150,000 visits. Wow - has it been that long? A HUGE thank you to all the followers and visitors to my humble blog.