Last weekend we had our second meeting of our wargaming group at the Lanyon Vikings Sports Club (a great venue!)   This time we had about a dozen players and four decent games - Greg's Zulu War Isandlwana scenario which he will feature together with an impressive piece of mountain scenery at the next Cancon. Mike and Craig did a Saga game with Vikings versus a Crusader military order. Leigh and Ian did a  Rapidfire 20mm refight of the WWII Corinth Canal (Op HANNIBAL).  Mike has posted some great photos and a two part report on his terrific Satrap Miniatures blog.  Doug, Mark and myself tried a Thirty Years War Pike and Shotte scenario - one of the earlier fights between Gustavus Adolphus' Swedes and the Polish Commonwealth (mainly) mounted army at some place with an unpronounceable name in Pomerania using the Warhammer ECW rules.

In the scenario the Swedes and their allies (mainly Scottish mercenaries) set up on a low series of hills opposite a low flat boggy fields with a road up the middle.  One regiment of mercenary pike and shot, my only gun (a Saker) and my cossacks were the only forces deployed with the rest of the Polish forces which included their German mercenaries marching up the only road as it emerged from marshland.  Rightly fearing the Polish horse, the Swedes had chosen their position well to restrict the Polish cavalry's maneuverability. 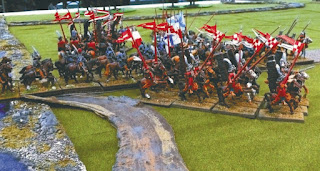 I whinged a lot about the scenario thinking the hordes of Swedish artillery would just slaughter me as I came up the road - my only way on - but Doug assured me that artillery of that time was just not that good.  Well it was and it wasn't.  When it hit it did a lot of damage on the dense formations but it took quite a bit to hit - from trying to estimate the distance then a pretty good chance of a misfire of some sort.  The Swedes had only four rounds of shooting before using up all their ammunition too.  Not that it made all that much difference for my poor old Polish Pancerni cavalry who were first up the road.

The German mercenary shotte advance with the Pancerni trotting up the road in column, an irresistible target for the Swedish guns. 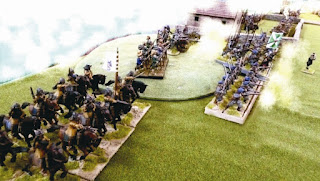 Part of the daunting Swedish position - the right wing with Culverins on the hill, Scottish mercs in front and their heavy armoured cavalry anchoring the end

The Polish shotte come on right after the last of the cavalry (mercenary German Reiter) who have managed to mask the only Polish gun for a turn.

The Polish left including one regiment of the famous Winged Hussars. The much reduced Pancerni (about half left but still on the field!) deploy in front of the German foot.

The fearsome Haiduks (armed to the teeth with muskets, swords and dirty great axes) come on in front of the second regiment of German foot.  Unfortunately they didn't get close enough to get into action before the game ended.

After a bit of success with my own single gun firing straight up the road there was nothing for it but to charge in with my heavy cavalry and hope for the best.  On the right I started the right way with the cossacks skirmishing in front of the dangerous Swedish foot, trying to draw their fire and screening the other regiment of Winged Hussars deploying behind them and waiting for the right time to charge in.

The cossacks skirmish with the Swedish foot - bows against muskets looks uneven but the milling cossacks are a hard target to hit!  Amazingly the losses were about the same! 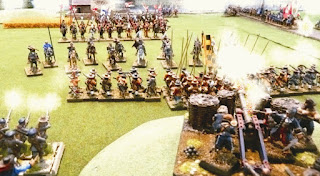 The Swedish Culverins keep up a lively cannonade on the Polish cavalry.  These guns and the Petard (mortar) actually scored several hits on the hussars and the German Reiter deploying off the road behind them. 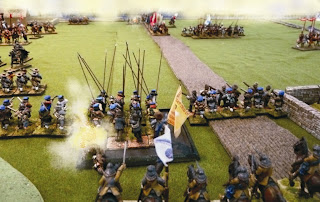 The lone Polish Saker in the far distance, when not masked by deploying troops, successfully targeted the Swedish troops at the other end of the road. No misfires for this baby!

I tried the same tactic on the Swedish right.  Unfortunately I did not have enough Pancerni left to screen my hussars properly as they had been decimated by continual cannonade and my hussars too started to suffer more hits from the Swedish guns. In a way the Pancerni had served their purpose by drawing the fire that could have otherwise weakened the hussars. The last of the Pancerni disappeared from the field after a massed volley by all the Scots mercenaries in the village virtually wiped them out. There was nothing for it but for the hussars to charge straight in. 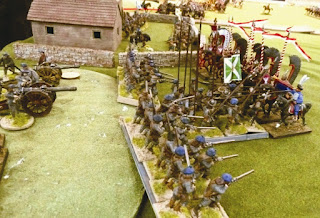 The hussars absorb the shot and charge into contact with the pike, successfully discharging their pistols into the dense ranks of pikemen before hitting them with their own 22 foot lances! 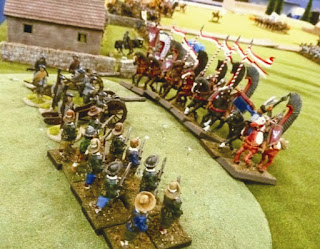 After a ferocious melee the pike unit was destroyed and the muskets fled the field, with the hussars deciding to risk all by continuing their charge right into the guns and supporting shot (artillery guard) 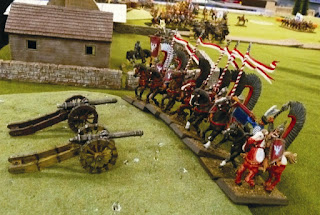 It proved all too much for the artillery crews and their guard who broke and fled.  Unfortunately for the Swedes they had decided to move their heavy cavalry into the centre, otherwise the hussars would not have dared attempt to continue the attack 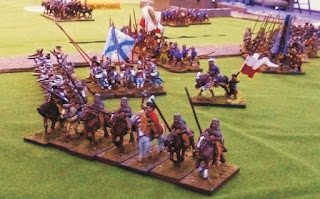 The fifth and final turn saw the last of three rounds of hand-to-hand combat between the other hussar regiment and the redoubtable Swedish pike in the centre.  The Swedes lost every combat, being whittled down to just the colour party and a few men surviving - but still standing their ground! The presence of their beloved CinC on the hill directly behind providing the incentive to fight to the last - and providing the Swedes with the necessary points to survive their morale rolls after each loosing round of combat! 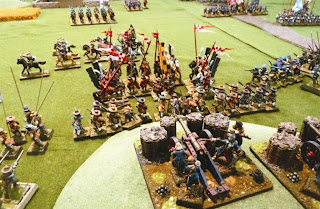 Surrounded by heavy armoured hussars who hacked them down with their deadly three foot long Palasch swords, the pike stand by their colours to the last man!  Their courage saved the Swedish centre from caving in. 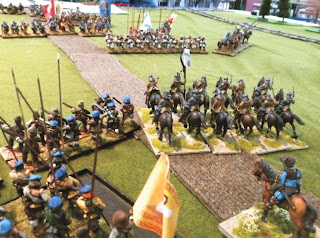 The Swedish centre wavered but held thanks to the redoubtable Swedish pike.  The heavy armoured cavalry attempted to relieve the pressure by moving up the road against the German 'Weissfrockern' ('Whiteshirts') mercenaries advancing against the Swedish centre.  The Germans risked a massed volley (it means everybody fires at once) which gives you extra chances to hit but means you can't fire next turn - its a one shot option!  Their shooting was deadly mowing down half the front rank of cavalry who were so unnerved by it they failed their morale and fled the field.  At the same time the cossacks, although down on numbers, somehow managed to hold off Mark's Finnish madmen (light horse in the service of the Swedes - Poles hated and feared them!) long enough to eliminate the last of the threats from the Swedish position.

At that stage we had run out of time and had to finish up, awarding the game to the Poles.   I have to thank Doug and Mark for a great game and putting up with my whining about the scenario, given I was unfamiliar with the rules (and wondered how the heck they would work for the unique Polish hussars).  I should also thank Leigh and Ian for again organising a great days gaming at the club with its great counter lunch and wet bar (what more could a hungry, thirsty gamer want I ask you?).  A great afternoon at t'club with the lads -
and we'll be playing more Pike and Shot again! 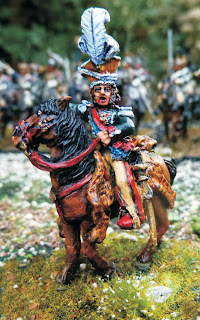 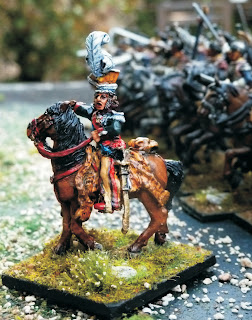 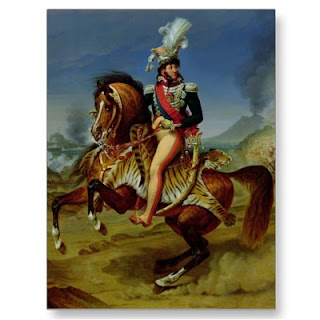 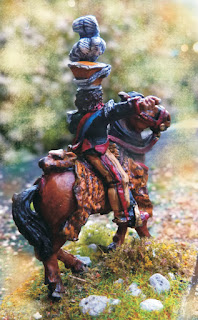 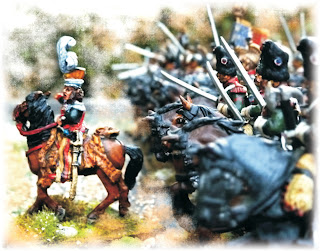 Going to a good home - some Sudan Campaign Camel Corp

Something right out of the box - the 'For sale' box that is!  As part of Doc's rationalizing of his lead pile (in order to raise much-needed funds for the War Chest that do NOT have to be approved by the Minister for War and Finance beforehand!) found some very nice Castaway Arts Sudan Campaign figures. These figures are the Egyptian Army of the Sudan Camel Corps - they can be found under Castaway's 'Colonial Egyptian' range on the site. 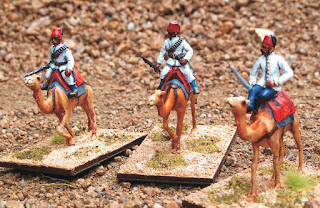 Don't complain Mohammad - my camel is just as bad-tempered as yours!

As is his want, Gerry produces some of the more eclectic ranges of figures that are not otherwise well represented by better known manufacturers.  And very nice they are too.  I particularly like his animal sculpting - his camels are particularly good (check his Sumerian donkeys out as well!) 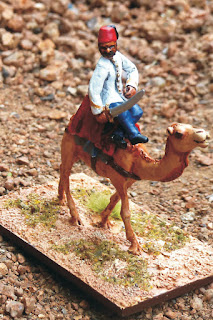 The officer figure with a nice bit of cutlery - he doesn't look particularly secure perched on the camel like that!

I painted and based them on a whim as I just had to see what they looked like done up.  Now I've painted them I only wish I collected more!  I have to say Castaway's figures are not cheap but they do offer extensive ranges of otherwise unusual or hard to get figures - the Colonial Egyptians being a good example. 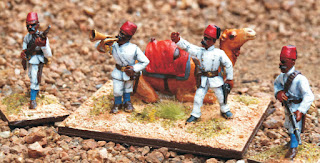 Dismounted Camel Corp with command stand - the officer shaking his fist ("Curse you Mahdi!") is actually an ensign - anyone buying it can add the guidon of their choice!

Well, that's enough of me spruiking for Castaway - I want to sell my figures - not his!  Anyway, I've got to shift a lot of others - bits of everything but mainly Napoleonics and mostly Russians.  Just thought I'd post this lot before they (hopefully) sold as they just looked so nice! 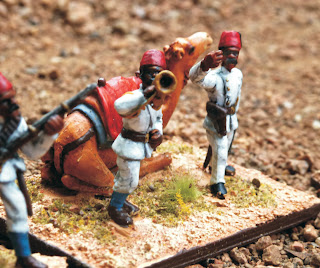 The Blog Management apologises for this brief interruption to service - normal transmission will be resumed as soon as possible! 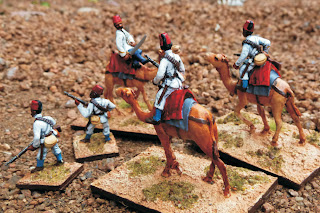 Right Abdul - I've had enough of this - let's go home!

The next unusual lot to finish will be a command unit of Napoleon's Camel Corp in Egypt!  And that should just about exhaust my supply of camels, which is good as I have a truck-load of Franco Prussian Wars figures still to finish (groan).