The 'ANZAC Fury' is a reference to the most excellent book on the Aussies and New Zealanders in Greece and on Crete (named by the British as 'Creforce') by Australian author Peter Thompson.  It is perhaps the most Aussie-centric book on the subject I've read as many (most?) of the books on the campaign downplay or even ignore the role the Australians played in comparison to the New Zealanders or Brits although I'm sure the Greeks would make the same complaint - after all, it was in their country! The other very thorough and readable book I read on it was Antony Beevor's 'Crete: The Battle and the Resistance' unfortunately spoiled, I thought, by the thinly veiled contempt Beevor seems to have had for many of the Australians. I tried to compare this to the amazing and heroic feats of the Australians in that campaign and particularly on Crete such as those by Ralph Honor and the 2/7th Bttn.and it just didn't gel with many of the British histories. In fact I didn't get a real sense of what the Aussies in the 2nd ANZAC's achieved in this campaign until I read Thompson's book.  Suffice to say it made me determined to create a representation of those magnificent soldiers to oppose the Fallschirmjaeger force I made to play our campaign (see my post last year:

The Perry's WWII range made it even more imperative I make up a Creforce force with their great 'Desert Rats' box of plastics and the accompanying metal heavy weapons and AFVs. Basically you get a full platoon in a box and I couldn't resist the Bren carrier squad as well as two Vickers HMGs and a 3" mortar. The Bren carriers are excellent resin models that don't require much work to do up for painting. 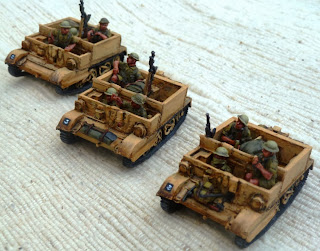 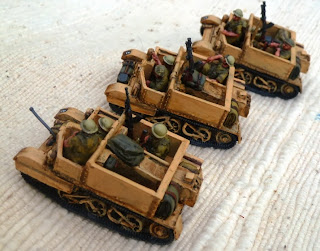 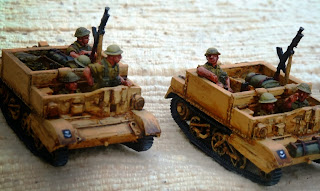 I painted the 6th Div kangaroo and boomerang insignia on the left guard as I don't know if the battalion were issued their own carriers.  I gave them the desert sand paint scheme as they came mainly from Syria and were not repainted for Greece.  Records indicate they came in a range of schemes from desert to standard tank green and Caulder camo pattern. One carrier squad could carry one platoon section as well as a two man crew (gunner & driver).  I've armed them with Brens on spindle with one of them equipped with a Boys AT rifle in the weapons compartment - that was very tricky to get in!

The metal heavy weapons are well made (as you'd expect) and the crews fit well - although the mortar was a bitch to put together (not unlike their Warlord German FJ versions).  The end result is what counts and I'm reasonably happy with that. 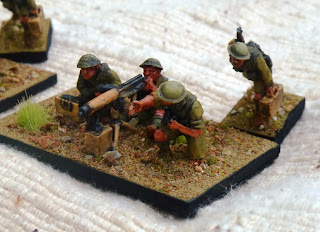 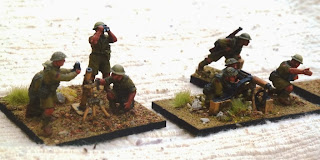 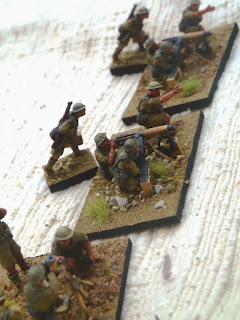 In addition to the Perry's figures & 'Blitzkrieg' AFVs I had previously acquired a Mark 1 Crusader tank in European colours (Caulder scheme) of indeterminate make.  Probably painted for France 1940 I don't know if they were among the hundreds of AFVs the British sent and lost in Greece, but the Western desert force that had just whipped the Italians at Bardia etc, were equipped with them so I've made the assumption that my Aussies could would have had them in Greece - if they were lucky enough to have tanks at all!  Besides which, it only cost me $10 and someone did a very nice paint job on it. 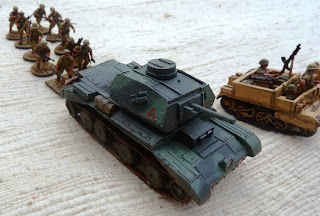 The rest of the force I still have to do consists of another box (platoon) and two Matilda tanks (which they had on Crete) - I look forward to making them up. I wish they'd produce a decent Vickers tankette which they also had in Greece/Crete.  Totally useless against anything better armoured than a Kubelwagon, they were fought against the German paras with great tenacity and courage by their British crews on Crete. I want one (or preferably two) so please Mr Blitzkrieg - get cracking! 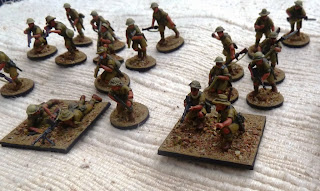 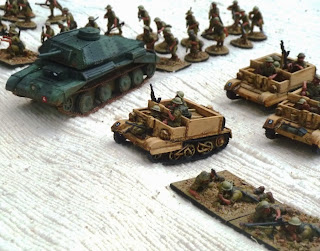 The Bren carriers are so nice I took a few more pictures of them.  Great poses for the crews too - they must have been bloody uncomfortable things to travel in though! 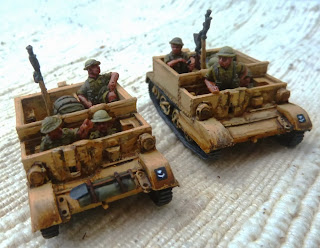 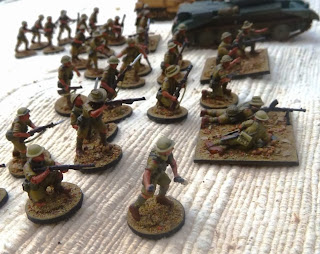 I've equipped some of my Aussies with the (metal) slouch hats Perry's malke separately.  They come with the disclaimer that they were rarely worn in combat and while this was true to a certain extent, there are plenty of examples where they were - particularly on Crete where paras came down everywhere including in amongst battalion lines first thing in the morning.  I reckon plenty didn't get the chance to get their tin 'ats on!

I seem to have lost all my pics of the Perry's French wagon which is a pity but the WWII Aussies are my latest. I have to apologise for the picture quality when I set up to photograph them outdoors - heavy clouds rolled over and the light went.  I'll post more as I finish them, and hopefully a game this weekend - so I'll endeavour to keep you all posted!
Posted by Doc Smith at 12:03 AM No comments: 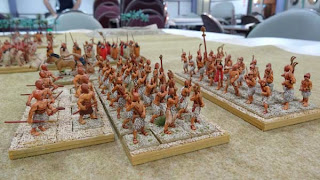 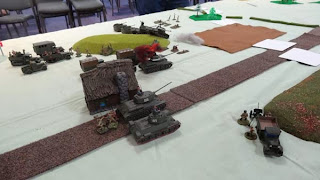