The first batch of eight figures are done.  I tried to do small details like the grenade device on the saddlecloth and the regt. number on the portmanteau with varying success.  My eyes just aren't up to such fine detail and even with magnification and lighting its still a struggle.  Nonetheless its done. 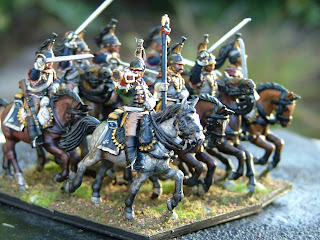 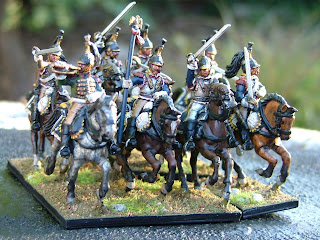 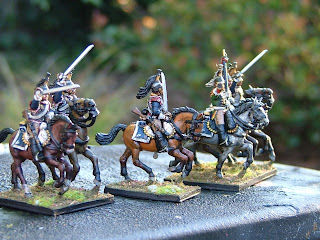 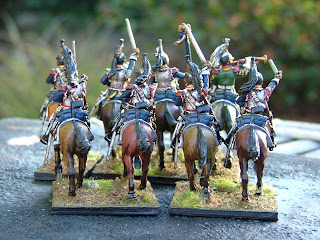 I don't anticipate such a drawn out process with the second batch or the Carabiniers - now I think I have worked out how the use the Army Painter tone to best advantage. 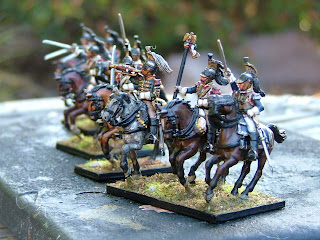 Unfortunately uni work looms with the start of term next month so it may be a while before my next post.  Hope you all enjoy the photos of my first batch of the Perry's plastic 28mm French Cuirassiers.
Cheers,
Doc
Posted by Doc Smith at 7:52 PM 10 comments:

After many delays, pfaffin' about, experimentation and so on, the first batch of cuirassiers - 8 figures of the 5th Regt. - are now complete.

I still used washes over the colours and even the flesh to get the tone I wanted before finishing with the Army Painter - far too many steps perhaps to do them quickly.  But as I had so many interruptions to my painting I used each uninterrupted session to plan out the painting.  This worked out better in the long run - particularly for the horses - which I wanted to get right.  Hopefully I have achieved this.

After finishing the painting I put the Quickshade Strong tone on (the mid range one) by brush. 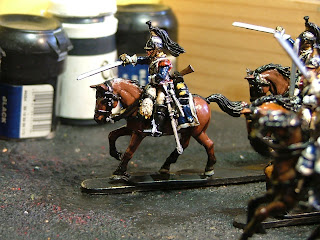 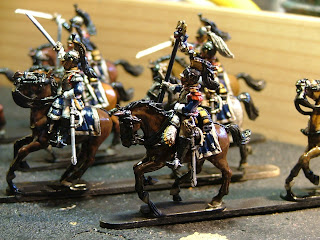 After this I realised that the tone made some things a bit too dark and 'muddied' some of the white highlights.  I ended up doing the white gloves, belts and the grenade design on the saddlecloth.  The last bit was annoying - I can't paint small details that well and having it slightly raised in the sculpt would have been more helpful. I also redid the swords as the tone made them look a bit dirty.  After the final paint touch-ups I made the bases - I always do my own with board and adhesive backed  magnetic sheets. 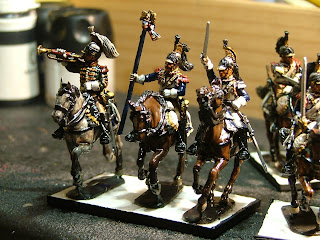 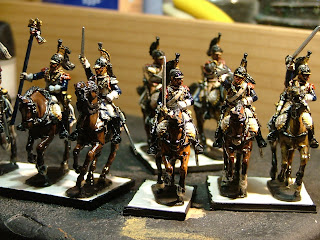 Next step was the flocking to finish off the bases, then outside for a decent coat of matt varnish.

I was looking at my Victrix Italians and noticed that the Voltigeur company was bereft of two plumed shakos, making it look at bit, well... ordinary.  Hunting threw my spare bits I found two long shako heads so decided to do a head-swap op!

In doing so I decided to paint up the new heads at least in base colours before I attached them because of the fiddly paint work involved with the packs partially covering the back of the heads.  Well, once I started on this I kind of continued, as I was getting pretty good results just holding the heads by the plume and painting them up. 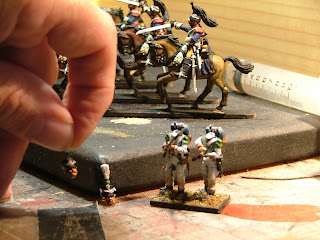 I ended up putting washes and finishing which I found easy to do. 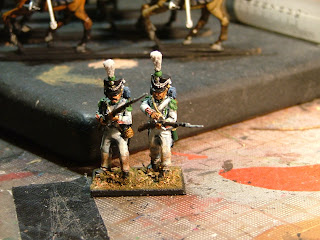 I then glued on the heads and painted the shako plumes - they'll just need a wash to add depth and some  highlight to the feathers and they're done! 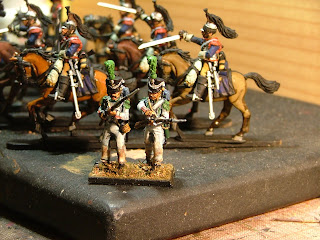 This poses an interesting question as it took me about ten minutes per head to paint to completion - less than an hour from having the idea, luckily finding the required bits, painting then gluing them on.  It would seem that you can do fine detail required quickly and easily painting the heads before putting the model together.  Hmmm, I wonder if I should try it with the next bunch of Victrix I build?
As you can see in the last pic they're big lads against the Perry's cuirassiers I'm doing behind them but will still fit in well enough.
Happy now I have four Italian Voltigeurs that actually look like those fancy-dancy skirmishers! Now after that brief illuminating interlude - back to the cuirassiers!
Cheers,
Doc
Posted by Doc Smith at 10:16 AM 7 comments:

Nearly finished putting down all the base colours and tone on the cuirassiers.  I still need to finish off a few things like the white including edging on cuirass liner and horse cloths and then all the black bits, the brass lining on the helmet, cuirass straps and musket and finally the faces.  The last step before basing will be the Army Painter dip (painted, not dipped!) then some touch-ups where needed.

Hmmm, quite a lot really!

Still, work's a killer at the moment so any progress is good. 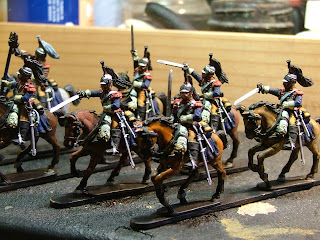 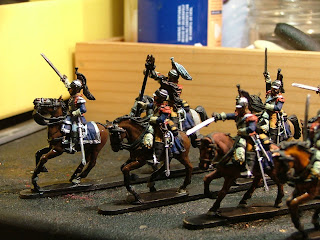 I've progressed the cuirassiers - laid down some tone on the horses, finished all the metallic minus washes - so we're now at a more steady rate of production which, for me, is slightly faster than a glacier.  Cleaning out the wargame storage area in my garage I came across some really nice figures I had put aside last year.  They are Late Renaissance mainly Swiss and German, mostly Foundry figures with one or two GW and Old Glory.

I decided to get rid of most of them because none of my mates here had an interest in the late Renaissance period - wars in northern Italy - which was a pity as its a colourful period and with guns starting to make a serious impact on the battlefield, interesting to play.  Nonetheless I recorded many of this collection, some of which I kept so as to have an Empire-type army to battle my son's orcs.

Gentlemen, while I finish the cuirassiers at a cracking glacial pace, herewith some pretty pikey Swiss and filthy Landesknecht etc for your perusal. 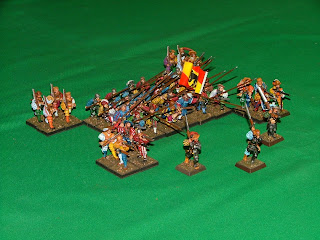 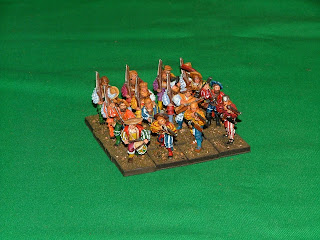 Most of the Swiss arqbusiers are Foundry but Old Glory made some great figures for this period too - like the musician. 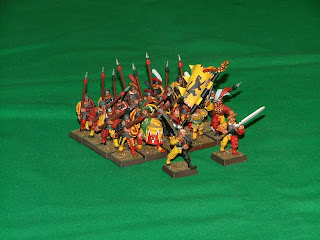 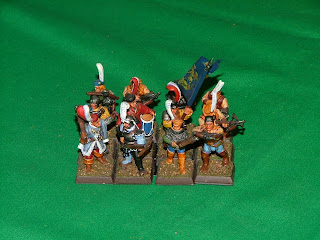 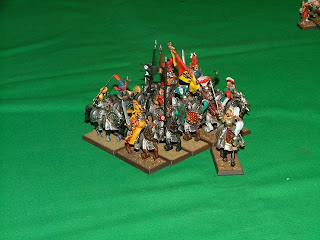 German knights (GW figs - mostly plastic!)  the mounted are the most colourful and great to paint 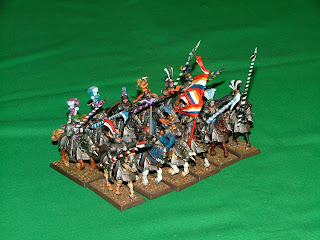 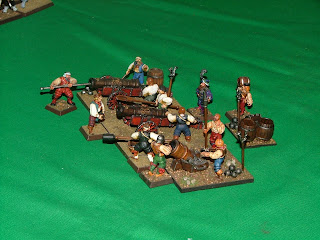 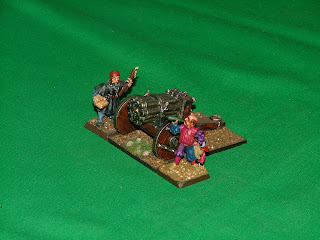 One of my faves - an organ gun with the gunner taking a strong swig on the grappa before lighting her up!
So, perhaps a bit off topic for some of the readers of this blog but they are figures which I keep in the forlorn hope that one day I may be able to bring them out for a game!   To finish - a shot of what was (most of) the Renaissance army. 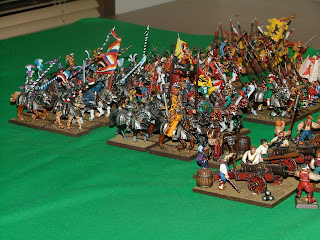 On the bedside table...

While I'm battling with things to complete the cuirassiers (all base colours down, now for the horses but its slooooow work with constant paintus interuptus! from work, kids & uni etc) so here's my reading list - hobby, not uni!

The book I've just finished reading is Paul Strathern's "Napoleon In Egypt" -  with some excellent battle and campaign descriptions, accurately based on primary source material.  The cover with the Gerome painting of his Nibs in Egypt on a camel is one of my favourites of Napoleon and attracted my attention.

Its a beautifully written book and Strathern's research is meticulous.  The Syrian campaign culminating in the failed siege of Acre is amazing in concept (as was the entire Egyptian venture) and offers a rich feast of 'what ifs' and desperate battles - read about what really happened in the lead-up to Mt. Tabour for example - a very 'near-run' thing indeed.

Its inspired me to think about re-creating the Napoleonic army of the time and creating Mameluke and Turkish ones (with a smattering of red-coats and marines thrown in for good measure). Now that would be a project-and-a-half!

The one I'm currently reading is "The Eagle's Last Triumph - Napoleon's Victory at Ligny, June 1815" by Andrew Uffindell.  It too is well researched and based on primary source material, not just the opinion of the author, an important consideration IMO as there is so much written about the 100 Days and this battle.

While Uffindell addresses some of the controversy about the role Wellington played in the flawed battle at Quatre Bras, he explains more of what Ney did and why in relation to the latter's failure to envelope the Prussian's right as instructed by Napoleon.  Uffindell quotes Hoffshroer as a reference for the famous meeting between Wellington and Blucher at the Bussy mill but does not go into the controversy about Wellington supposedly telling Blucher a load of cobblers about coming to his aid etc etc.  Hoffshroer's controversial 'we-wus-gypped' claims about the Prussians have been carefully ignored by Uffindell in his retelling.

The Prussians were hard done by, but more by their own hand then Wellington who, after all, was reacting to being 'humbugged' by Napoleon!  I'll see if I still hold this view when I've finished Uffindell's book.

The last one on the bedside table to read is Mark Urban's 'Fusiliers - Eight Years with the Redcoats in America'.  I got this one on spec as I have read and enjoyed his acclaimed 'Ten British Commanders Who Shaped the World'.

The rapidly growing pile of uni books and papers is looking ominous and I have to get someway through  it before classes start in March - so I don't think I'll be able to get to Urban AND finish the cuirassiers AND start the Victrix Italians (2nd Regt) before then [sigh].


That's all for now.

For those loosing the will to live at not seeing more figures, I promise the next post will be some figures painted!