I've decided that I'm not a very good blogger as its been a quite a while since my last post - but work, more work and the footy season have intervened. Barely had time to look and comment on other's blogs - so I do apologise to any of my 'regulars' who may feel slighted by my poor effort!  Alas - much of the weekends are not my own now and the list of things from She-Who-Must-Be-Obeyed requiring my immediate attention grows ever longer. [Sigh]

But still I have managed some painting and figure work (although, unfortunately, no gaming as yet).  I'm still adding to my Franco-Prussian War collection and at last count have more  than 8 battalions of infantry and two regiments of cavalry to complete.  Two entire brigades - one of Wurttemburgers and now one of Bavarians. And another huge job to get done before the end of the year.  I've made a start but lots of things keep intervening, which is the way of it at present I suppose. 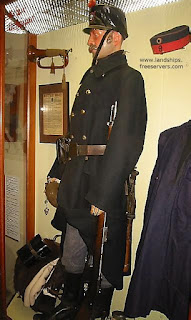 Nonetheless, amongst those 'interventions' have been other figures and the latest lot completed have been a bit of a pleasant surprise.  Although not done for me they have peaked my interest in the period - early WW1 - as before the heavy artillery and trench warfare got going it was a colourful period with lots of combined arms action and early armoured cars etc - a bit of everything.  The figures I've just done are a bit of a departure from my usual posts.  These particular WWI figures being early war Belgians - two Maxim machinegun teams - and one of them the famous dog-drawn Maxims.  I've copied the uniforms based on the following example of an original from a Belgian museum:

The trousers on mine are an almost blue-grey but there appears to have been quite a bit of variation before the Belgians swapped over everyone into a khaki version of the French uniform by mid-1915.  In fact the thing that attracted me to the period is that they are very similar to the FPW armies of forty years earlier. 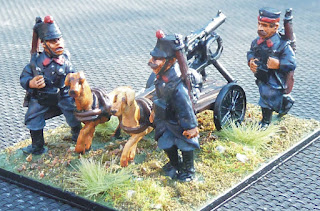 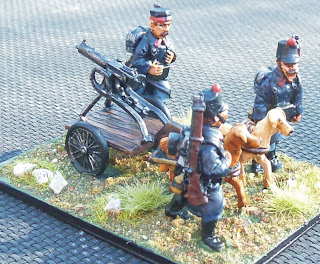 The black or coal-grey uniform of the Belgians at the start of WW1 was considered very outdated but I tend to think they would have blended in quite well in the blighted industrial wastelands and mining slag heaps they fought the Germans in southern Belgium(?)

A photo of the real thing - the lads and their dogs looking like they've just come out of a Belgian coal mine - or just about to go down one!  Note the variations in the uniform, particularly the headgear for early war.

Unlike the French, the Belgians didn't try to stop the German onslaught with suicidal attacks en masse but rather conducted to steady retreat and although against great odds, managed to stop the Germans along the Yser river - and thanks to the BEF, still managing to hold on to a pocket hankerchief bit of Belgium from Ypre to the coast. And as well as having some colourful infantry and cavalry, they had a squadron of 'Minerva' armoured cars that gave the Germans quite a bit of bother - 'Plucky little Belgium' - no wonder my mate wants to collect them! 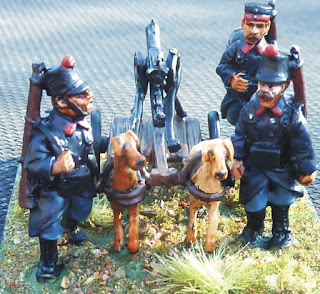 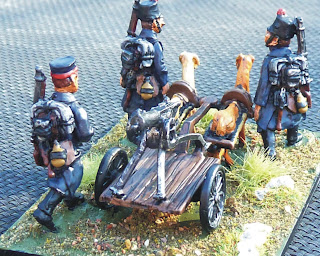 Those old Maxim machineguns were pretty heavy - over 100 kilos - and then there was the copious amounts of ammunition needed to feed them.  The Belgians came up with the ingenious idea of using small carts on bicycle tires pulled by a team of two large dogs per cart.  The photos I've seen show a lot more on those carts than just the Maxims but this Foundry model just has the gun - but you get the idea anyway.  A really nice little model.  Doesn't bear thinking about those poor dogs once the guns got into action though - as far as I know they only lasted for the opening few months of the war. 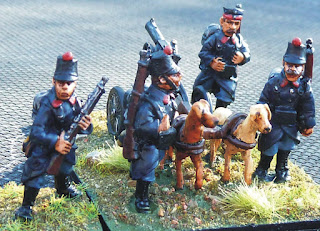 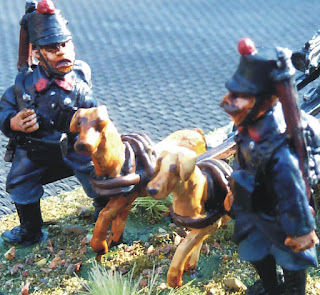 In addition to the doggie gun team I had another of the Maxim team in action.  These are also Foundry figures and I thought a bit on the rough side - certainly not the best sculpted Foundry's I've seen but far from the worst and they look OK went finished & based (I think). 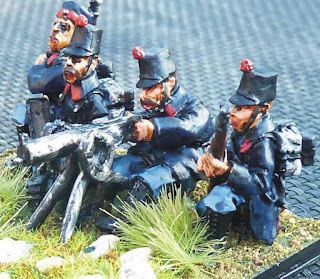 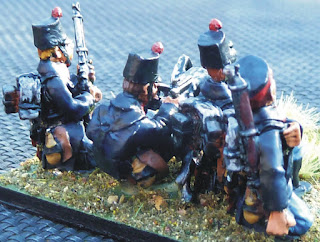 I had intended to put them behind a low stone wall or something (look just as 'at home' in a Belgium coal slag heap perhaps?) but went for the more traditional setting with some grass tufts which still works.  In other words I have so much to do, faffin' about buildin' little stone walls for someones else's figures wasn't going to happen! 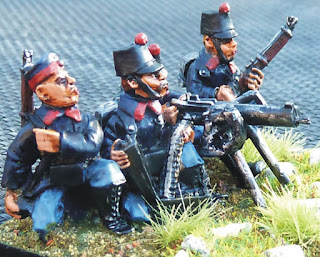 Well that'll do for now.    Back to the grindstone - another regiment of cav to churn out for someone else before I can get to my own stuff. Couldn't finish the Poles just yet either - still only half done - although I have finished one mounted officer which I will get round to photoing soon.

As always, comments more than welcome, click on the pix to see enlargement etc etc.