In amongst the Bolt Action WWII AFVs and Italians I've had my Napoleonic Bavarian Brigade project puttering along.  It was unfinished, a mishmash of figures and needed sorting out for years, all the more so when I succumbed to temptation yet again with the new Perry's line of Bavarians.  I bought enough for three battalions worth - two line & one light - plus artillery limber and caisson. The Bavarian Brigade consisted of six x 12 figure battalions, one of them painted as LI, two of them Front Rank and the rest old Foundry.  Added to this is one three gun battery (scratch built to match captured Austrian pieces) with Foundry crews and two Chevau Leger regiments one Front Rank and the other Foundry. Like I said, a bit of a mishmash.

The plan is to have a Brigade consisting of one regiment of two 24 figure battalions of Foundry, one regiment of two 28 figure battalions of Perrys and one 12-16 figure battalion of Light Infantry (Perrys).  I'd also have my 24 figure battalion of Front Rank for good measure which would make for a six battalion brigade - historically matching what they marched into Russia with.  Apart from the Foundry command stands and the repainting/rebasing of them and the existing 12 figure Foundry LI I have over 70 new Perry figures including three mounted commanders to paint and base.  Together with diversions for the WWII stuff including my Italians and AVs its taken me the better part of nearly four months - but the end is now in sight! I have five battalions of infantry and mounted commanders for both infantry and cavalry finished and very happy with the result!

Interesting the size discrepancy between the old Foundry (also possibly sculpted by the Perry brothers when they worked for them many years ago?) the Front Rank and new Perrys figures.  The 28mm FRs tower over everyone and are positively Teletubby-ish in their proportions compared to the 28mm Perrys - I think the old Foundry Bavarians are probably 'true' 25mm. You tend to notice the difference in the foot figures rather than the cavalry which I thought blended in quite well. 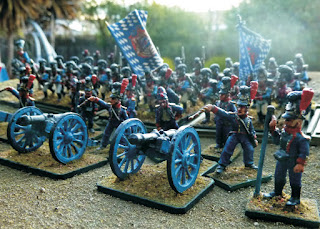 I found myself slightly short of command foot when I went to make up the Perrys regiment so I used one of the mounted commanders as the regiment's Oberst (Colonel), putting him with the infantry command figures on a slightly deeper base (60x40 rather than the 60x20). I have a mounted CO for my old Foundry figures which I converted from a Revolutionary French commander which in turn fits in with a mounted Oberst for each two-battalion regiment. Basing the mounted CO up with the foot worked so well with the Perrys I might try and do the same for the Foundry figures if I get the time.

The Perrys are some of the finest figures around and being priced accordingly I have in the past whinged about the occasional lack of quality control - the ultra-thin horse legs that have an alarming tendency to snap off bases for instance.  While Perrys seem to have addressed that issue I should warn that one reason they took me so damn long to paint was that I discovered after I had finished painting that there were unsightly lumpy bits, particularly on hands, cartridge boxes and bayonets that only became apparent when painted. Every figure has some flash from the casting process and the Perrys are no exception.  They have less than most but they still have some - ALL the Bavarians had tiny tendrils of metal on many of the raised and termination points of the cast figure.  Including bases I found these most prominently on the hands, ends of bayonets (and sabres), musket stocks and cartridge boxes. Mostly pressed and folded back onto the figure they were very hard to detect when prepping the figures for paint and once the base-coat was on, impossible to see. So the first two batches I did resulted in a lot of scalpel work, paint touch-ups and f$%*ing bad language after I thought I'd finished them! Very stressful as I don't bloody swear much.  I learned the hard way that it pays to go over every figure very, very carefully before paint! 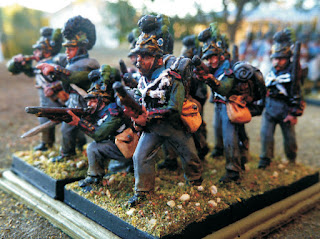 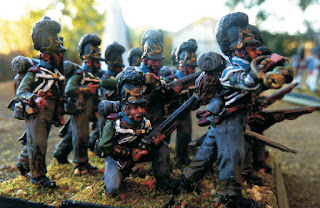 I have one more battalion of infantry and the artillery limber and caisson to go before I've finally finished my little Bavarian army. Might have to get a high command for them at some stage but for now I'm more than happy to finally finish one of my longer standing projects.

The matt on which all these figures are standing is one of my new wargaming tablecloths that I've made from rubber-backed canvas paint drop sheets, a liter of paint via my large spray gun and copious amounts of flocking. A messy process that had to be done outdoors but now I've got a mat that will cover a 12' x 4.5' table. Now that winter's over and I'm less likely to perish from exposure working outdoors I'm planning to do one for desert/Mediterranean theater games as well.

Well that's about it - Auf Weidersehen from Doc and Herr Oberst.  Almost forget to mention a plug for the forthcoming 'Little Wars' convention to be held in Canberra on 8 November at Lanyon Vikings club showcasing the hobby (click on the link to find out more). There will be traders there and games covering a wide range histroical and fantasy.  We're putting on our famous French and Indian Wars game 'Tomahawks Along The Ohio' which I have posted on previously on this blog.  Its a gold coin donation entry to go towards our returned servicemen and women - a most worthy cause so hope to see a few of my blog-followers and fellow gamers there.
Posted by Doc Smith at 3:06 PM No comments: