Finishing forces: Vichy French in the Levant and 1914 BEF, Germans

Lot of different odds and sods to finish off over the last month or so. My Vichy French Armee l'Orient - at least the Perry's figures/Blitzkrieg armour & vehicles - are done. Well, sort of - its such a colourful and unique force I keep finding new units I'd like to have. Oh who am I kidding!!! I want the Perry's  French Mountain Howitzer and Senegalese crew too! Then of course there are the Foreign Legion who fought on both sides... and then there's the Renault R35... as you can see Rubicon also do a lovely model of the Renault as well but good luck being able to find one as they're as scarce as hen's teeth! And that's the problem with these eclectic projects of mine - they tend to get a life of their own! 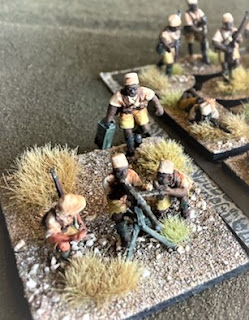 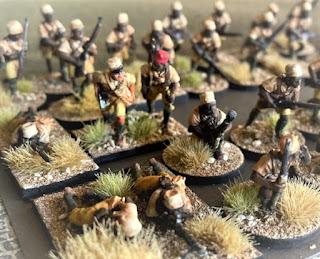 The latest I'm intending to acquire are the Circassian cavalry - there were also mounted Algerian Spahi - both rather good scouting cavalry which actually worked in the rugged and mountainous interior of the Lebanon (well, those that didn't defect that is!) Anyway I've found the perfect figures for them in the Gringo 40s French Spahis in their Tonkin colonial range.  But at $10AUS a figure I'll have to save up my Shekels! The French had 4 regiments of North African Spahis in the Levant in addition to the Circassians, Druze etc, etc. so a horse mounted cavalry unit (to counter my excellent British Yeomanry unit) is de rigor mon ami! 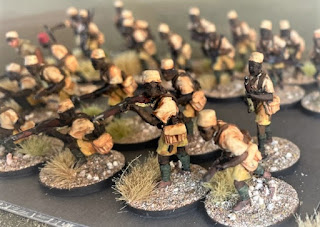 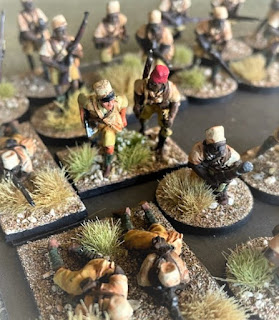 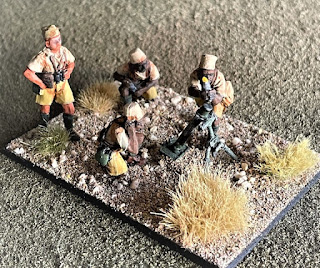 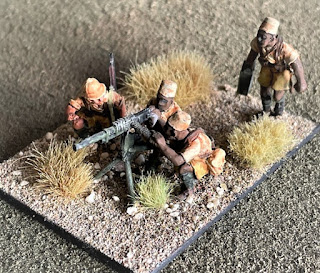 The French led Senegalese colonial light infantry (tirailleurs) along with the Tunisians, Moroccans and Algerians fought well in the campaign and proved tough opponents. According to the army list in James superb book ('Australia's War With France' - Appendix 2) the French fielded no less than 16 battalions of these tirailleurs. As far as I know Perry's are the only makers of any 28mm French colonial figures for this campaign but it would be interesting to get a unit or two of the other colonial tirailleurs.

Next cab off the rank are my WWI 1914 figures. I just got an order of BEF and various Germans from Northstar which has allowed me to finish off those two armies to add to the Belgian one I did earlier. Of particular fun were the respective high command stands I've made for them, just finishing the Germans a few hours ago. 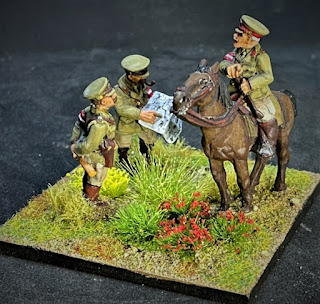 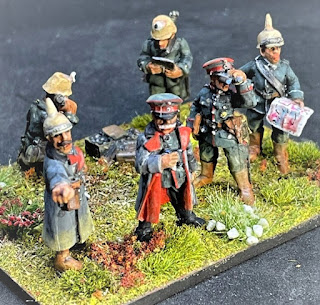 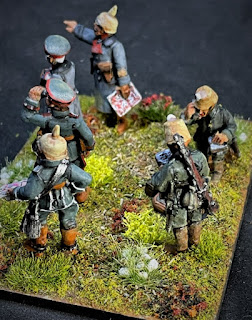 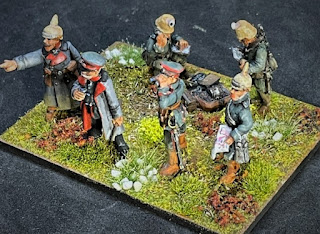 I've painted the BEF command as Corps Command staff 1914-15. I particularly like the Jaeger field telephone unit that came with the German command figures. I was thinking of putting them in a ruined church or similar but in the end decided to let the figures speak for themselves as it were as they're such a nice group. For all the major command stands for these I've put some red Flanders poppies on them somewhere.

Also with the Northstar 'Great War Miniatures'  were two units of dismounted cavalry - British Dragoons and German Uhlans. I've procured an officer for each unit, lightly converting the German one into a cavalry officer in soft cap rather than czapka-style hat. Again, nice figures. 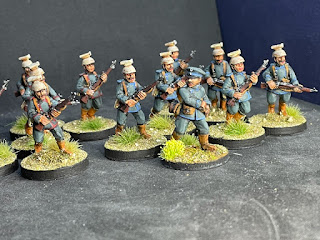 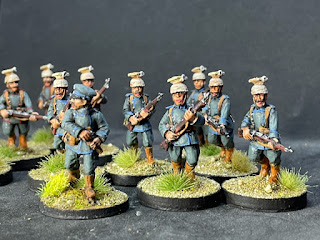 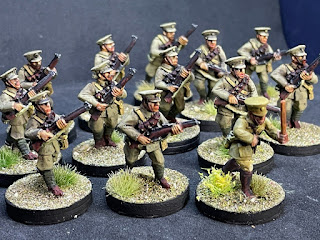 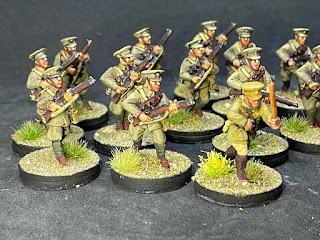 The British officer is a spare Woodbine cavalry officer I've had floating around. Also with the BEF I've got some Imperial Indians - Sikhs and Lancers (Hodson's Horse) I can add so the Germans are now quite outnumbered! 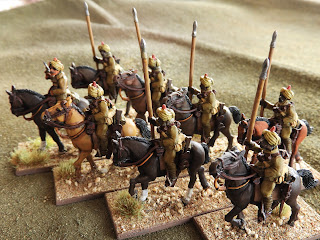 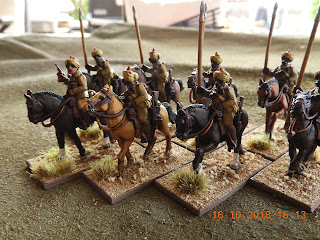 Amongst the other figures now completed are a generic Lowland Scots unit (originally London Scots from my 1916-18 army in Palestine). Again I had enough command figures previously to 'flesh out' a large (or two smaller) Scots units for my BEF. As you can see - just a wee bit 'o re-basing required! 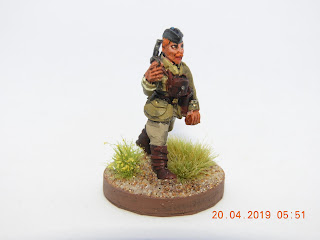 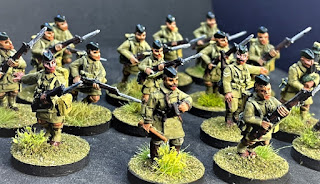 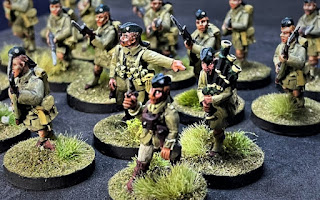 Other useful additions included a British cavalry command and similar for the German Hussars. 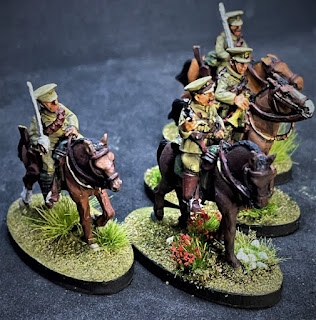 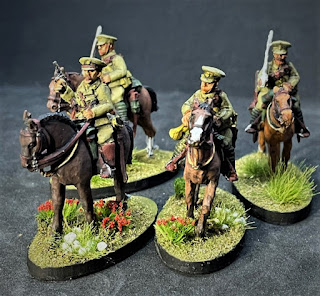 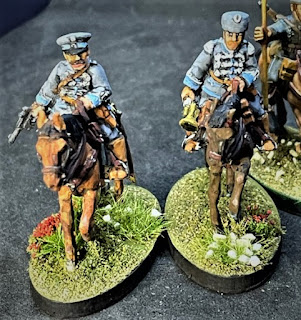 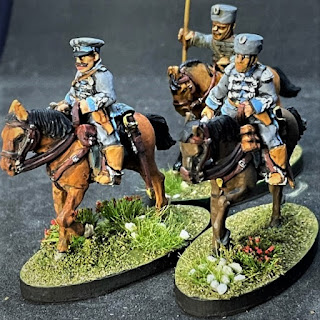 And last but not least a close-up of the German Uhlan officer. The conversion was literally Swedish cuffs, full collar and single breasted jacket with the aid of a scalpel and a bit of green stuff! 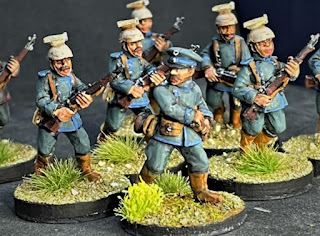 Not quite sure whats up next - there are Muskets and Tomahawks units of British Rangers and frontiersmen etc, recently acquired requiring paint - but I may have to put them all on hold while I extractus digitus and sort some wargaming scenarios out for all of the above!