Well, another Cancon has come and gone, the only difference this time is I actually went to it for all three days and was heavily involved, along with my wargaming mate Doug in presenting our Franco-Prussian War demonstration & participation game, Froschwiller.  I have posted on it before as we have repeatedly play-tested and tweaked the scenario, gaming it at our local club.  In retrospect there were a few things we would have done better (a bigger bloody table would have helped!) but all in all it went well and well over a dozen wargamers got to experience it over the two days, for many their first experience of gaming the period or historical wargaming.  The games presented by our group were Zulu - Isandlawana, Peking (siege of the foreign legations during the Boxer Rebellion) and Froschwiller - one of the crucial frontier battles in Alsace at the beginning of the Franco-Prussian War.  As you can see the latter I promoted at Cancon with an enormous ad banner nearly 2 meters tall - I didn't realise it was going to look that big but now I've done one we have the perfect vehicle for on the spot advertising for our games at future cons.


The terrain for Zulu was striking with a beautifully scaled version of Isandlawana Hill as a backdrop but its hat's off to the crew led by Andrew who recreated the entire section of Peking that housed the foreign legations, bordered by two enormous sections of the wall of the Forbidden City.  Did I mention the maniac Andrew actually took photos of the British Legation building when he visited Beijing, just so he could get it right?  It was more than just an act of extreme devotion by a dedicated wargamer as the bloody building is now MSS headquarters (the MSS are the Chinese secret police by the way).  Absolutely bonkers BUT he didn't spend his holiday in a Chinese prison and the result of such painstaking research was an amazing recreation of that part of old Peking.  In fact the lads put on one of the most amazing demo/participation games I have ever seen and it was first in best dressed for the very long queue of gamers wanting to try their hand at it.

All three games really pulled the crowds, attracting a huge amount of attention at the 'Con - to the point where crowd control became an issue (a first in my experience) as at times the large numbers of onlookers made it hard for some participants to actually play - that AND the near 30C heat!  By the end of the day both Doug and I were absolutely knackered... but happy!


The following pics have kindly been supplied by Greg and Ian (who ran the Zulu demo game) but it shows an exciting quick play scenario with of course, hundreds of Greg's beautifully painted Zulus.

The Zulu game was a lot of fun and very well attended, winning the award for best demo game at Cancon. Congratulations Greg! The simple straight-forward scenario surprisingly ended up with the Zulus being driven off nearly as many times as the British were wiped out under a sea of flashing asegai blades.

The most spectacular demo game at Cancon in terms of terrain and variety of figures was undoubtedly Peking.  This was played as a campaign over the three days, with the multinational relief column arriving in the nick of time on the third day.  I have scads of great photos of the action but too many to show so to give you an idea of just how big the game was, here is a selection of some of the best shots of the action.

Our game of Froschwiller went quite well, attracting a lot of interest, inquiry (most had never heard of the Franco-Prussian war!) and generated much positive comment, particularly from those who had never witnessed the awesome sight of 2,000 28mm figures on a table in a historical spectacular!  That said, we were stymied on the table size which caused overcrowding with that many figures and slowed down the action at several crucial points during the game.  It was an oversight, not quite sure how it happened but nonetheless it didn't stop the action from becoming fast and furious once the two sides were fully engaged by the third turn!

I have to thank Greg and Ian for the above photos of the Froschwiller game. I have dozens of action shots which I will be posting over the next few days but I think the above is enough to give followers of this blog a good idea of the terrific action at Cancon 2013.  You know, there are thousands and thousands of wargamers and hobbyists of every stripe participating or visiting Cancon over the three days in late January every year. You never know, august publications like WI may even some day cover the biggest wargaming convention in the southern hemisphere. Some day...

Some Napoleonic Poles - and plans for 2013

This is my first post for the New Year and to celebrate my extraordinary slackness in blogging I am posting a very small post on some very modest figure painting that I have managed to achieve since Christmas.  Life (and my imminent retirement) seems to have gotten in the way of the hobby for a while (at least the blogging aspects anyway) so to make amends I have tried to paint up my ever growing backlog of Napoleonic figures.  In addition to the wonderful Roger Murrow (Paul Hicks sculpted) Polish infantry (bought from Roger back in March last year!) 'Murrowski Miniatures', I have Perry's Austrian Hungarian grenadiers, Victrix Austrian Landwehr, Front Rank Austrian line (in helmets), Foundry French legere, Perry French artillery, odds and sods of French cavalry (Perry plastics of course) as well as mounted officers etc, etc.  And that's just the Napoleonic stuff. 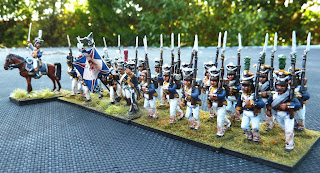 This is just a battalion of the 1st Regt of the Vistula Legion - I am currently finishing the second battalion at the moment.  I am particularly taken with the mounted officer who I have promoted to colonel of the regiment. I don't mind giving Roger's wonderful figures a plug on this blog either.  The prices are very competitive and reasonable and the range ever expanding. Did I mention they're beautifully made figures? 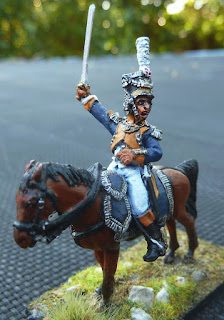 The mounted officer figures are very nicely done.  The other in a bicorne is in a more relaxed pose so I may attach him to the second regiment which I have just ordered from Roger (the idea is to have a full Black Powder-size Polish Brigade with artillery battery).  If the Minister for War and Finance finds out I may be dead man walking.  You see my hobby is supposed to be cost neutral - at least that is what I have repeatedly assured the Minister.  And for the most part it is.  All purchases and acquisitions last year were offset by painting jobs (mostly for my lead pimp Doug) or sale of parts of my own collection like my 20mm armies.  In fact I made a tiny eansy, weansy profit last financial year - so this lot should be covered by it.  But, if my latest indulgence is discovered, will She Who Must Be Obeyed be convinced?  Somehow I doubt it very much - even though I have two 28mm armies up for sale (Austrian and Russian Napoleonic - which I will post on the blog soon).  So I will just act as if nothing's happened and continue painting and whistling a happy tune! 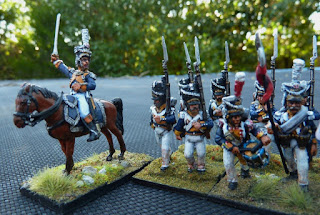 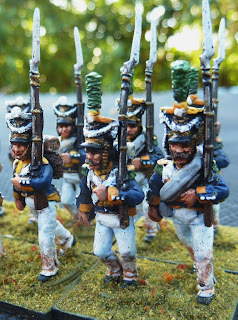 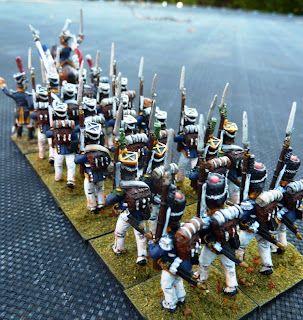 The Vistula battalion in column 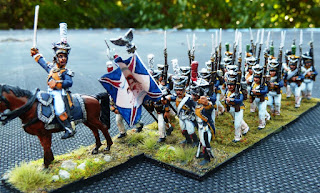 Right at the moment that's about it as tomorrow Doug and I have our final trial run for our Franco-Prussian War demo game at Cancon.  The FPW armies are complete, terrain sorted and scenario tweaked again (the umpteenth tweak - this time or sure!)  I may take some photos of it but as its been done to death on this blog so I may wait until after Cancon (@ end of January) to post them.  Besides which, I have plenty of other projects for 2013.

In addition to re-building my Austrian and Russian Napoleonic armies, some of the projects for this year include painting and basing an entire 1859 Austrian army(!) for the Italian campaign, finishing my Confederate army (nearly done anyway) for the Shenandoah campaign we're doing and finishing the other half of my WWII German para battalion for the Greek/Crete campaign we're planning for this year.  The piece d'resistance whoever will be my complete WWI Belgian and German armies for an early war skirmish game.  I have only a few Belgian HMGs (one of them doggy-drawn that I posted on previously) finished but it includes a complete squadron of Belgian armoured cars, one of which is in the process of being built.  The latter is entirely off my own bat as I don't know of anyone local or at the club who has comparable WW1 stuff to game. 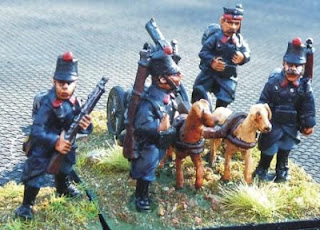 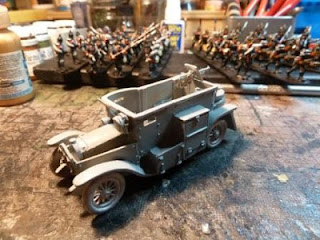 Building and completing two entire armies, French and Prussian, for the FPW demo was no mean achievement for 2012, particularly considering my usual glacial painting speed, so I'm pretty proud of that.  In addition I have just about finished my Thirty Years War armies, painting up commands etc and re-basing the lot. I still have a regiment of dragoons to collect and perhaps trading some pike & shotte regiments for some Swedes to match the Poles etc, but that is still some way off.  I have painted and based up a company of German paras and built and based an entire brigade of Confederates as well so 2012 was probably one of my most productive years hobby-wise. 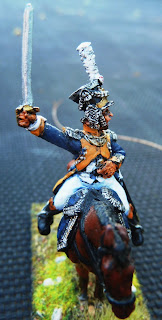 But I really want to get back to some Black Powder Napoleonic gaming this year too - Naps being my first love when I started collecting again about a decade ago!  Which reminds me, I'd love to start a French revolutionary Napoleon in Egypt army and must finish those Camel Corps guys...

... it never really ends, does it? A belated but happy and prosperous New Year greeting to all my blog followers for 2013.