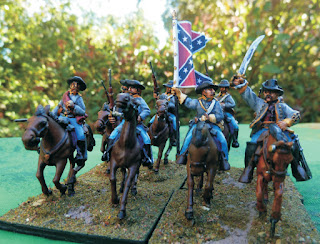 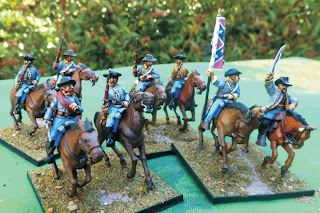 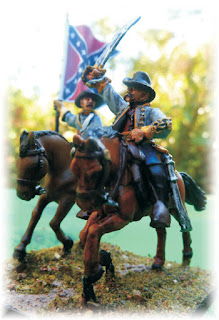 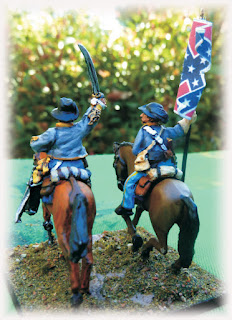 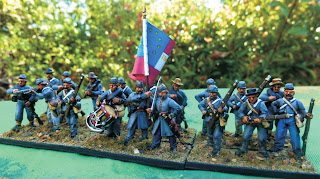 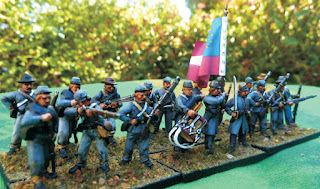 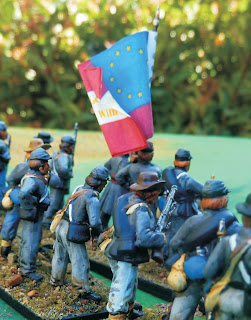 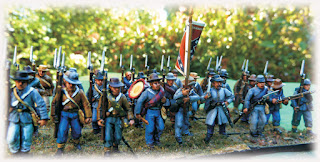 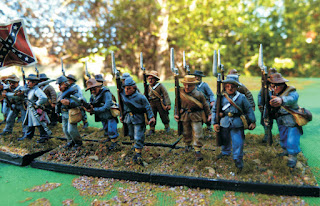 We finally got to fight the second of our battles of the Antietam campaign using my portable game table
(post back in May last year) at a mate's place - we took over Cam's lounge room for the occasion - a good if not snug fit with seven of us playing!  I completely forgot my camera to record proceedings but fortunately Bluebelly commanders Ian and Greg DID remember so all the pics are theirs - generously submitted to my blog, so at risk of consorting with the enemy - thanks guys! 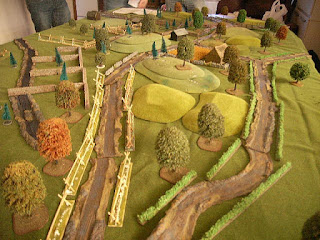 Our table set-up - the Rebs converge along the roads closest and top right. 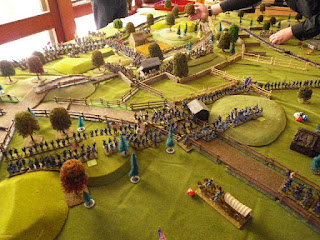 Dispositions at the start of the game
Due to the absence of one of our commanders, I got a changed command (at the last minute) from Drayton's Georgian & SC boys to Colquitt's Brigade (13th Alabama & Georgia Regts) of Hill's Division, which resulted in my coming in from the extreme left (along left hand road closest in above pic) in two separate groups. I also had one battery of guns which did some initial damage then promptly ran out of ammo on my first roll of the dice!  Unfortunately Doug also ran out of ammo in the initial turn which meant that I spent the rest of the game trying to get my battery close enough to the ammo wagon to replenish. 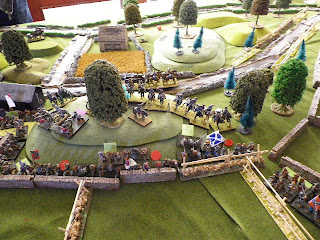 Doug's position in the centre - note all the 'out of ammo' markers - the powder wagon is in the background behind the hill.  It took most of the game to get there, replenish the Reb's holding the hill, then get close enough to replenish my guns to the left (out of picture) who were then promptly masked by Doug's advancing troops!
And that was to be the tenor of most of my game - didn't get involved until the last two turns then couldn't turn their flank.  I really rolled like crap time and again - and that'll do it to ya every time! 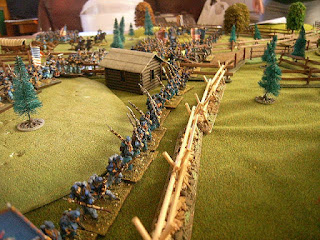 Greg's Union troops from Wilcox's 1st Division line up along the fence
Both Ian and Greg played very coolly and were never in any real danger from us - as the casualties on the flank suggested at roughly half a dozen stands apiece.  Elsewhere on the table it was a different result - in favour of the Union almost from the start. 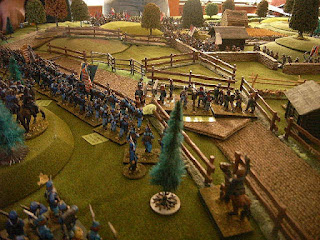 Andrew's Massachusett's boys line up on the left, with artillery pounding the centre of the Reb line.
Most of the action took place in the centre and left as Doug (senior Reb cmdr) took over Drayton's Bde holding the the farm in the middle of our lines and Stuart with Ripley and Anderson's Bdes did an ambitious sweep around the right to try and force the Union forces (two divisions worth!) back on themselves.  Andrew and Cameron's Union 1st and 2nd Brigades manfully held off Stuart's Reb onslaught, although we did score plenty of hits on the pesky Bluebelly gun battery and force it to skeedaddle! 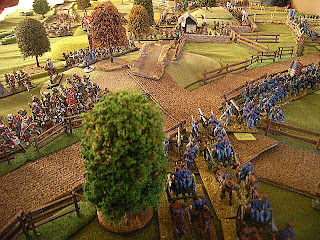 The Union left comes under increasing pressure
The problem for the Confederates is that we were running out of time.  Union reinforcements were pouring in all the time while the additional Reb division (Hood's) was still miles away.  We had to try and force the Union forces back before we were outnumbered and forced to retreat ourselves. 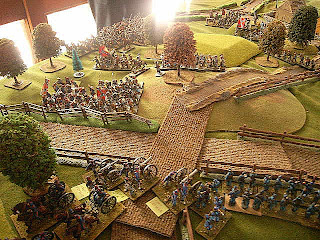 Stuart really gave it a good shot and came mighty close but in the end couldn't break through.  The steady stream of Union troops reinforcing their lines meant that once the steam went out of the Reb assault, we were faced with annihilation if we had persisted as the odds turned decisively against the Confederates. 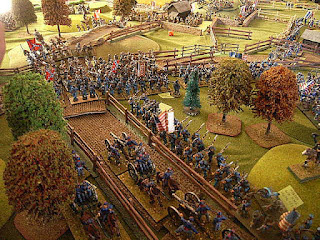 Cameron's Bluebellies just manage to hold off a desperate Reb assault as more reinforcements arrive in the nick of time.
Note that Union battery in full 'skeedaddle' mode down the turnpike behind them! 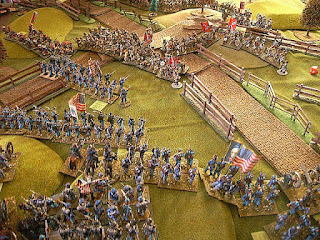 In the end the odds became just too great - some of those Union regiments had as many as 20 stands! 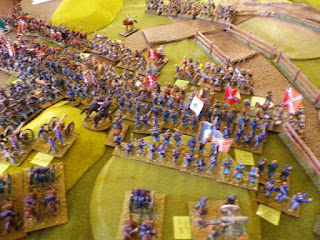 Titanic and desperate struggle on the centre/left 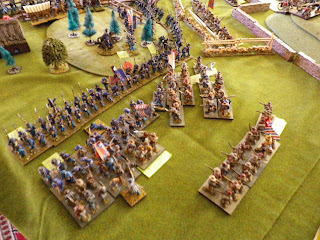 Doug and I tried to do the same thing on the Union right flank but couldn't quite bring it off.  Only time so far the rules let us down as there was no way I could engage all our attacking units (the one behind above) - had I been able to do so it would have been quite a different story but - ca la guerre! 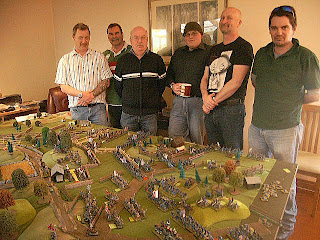 Da boyz  at the end of the battle - victorious Union (save Greg who took the pic) and not-so-victorious Rebs.
The Rebs sensibly decided to call it quits and withdraw after the attempt to turn the other Union flank failed. We lost about twice that of the Union forces which would have been OK had we have broken them but we narrowly failed - twice.  Hood's reinforcements would not have reached us in time. Andrew tells me that historically the Rebs got a real drubbing in this initial encounter - so we did well in comparison (cold comfort).
Thanks to Andrew for devising the campaign scenario and Cameron for kindly lending us his lounge room as a battlefield for a day! (Nice venue Cam!) and all for a congenial and fun afternoon.  Will keep you all posted with our future battles - and will remember to bring my bloody camera next time!
Cheers,
Doc
Posted by Doc Smith at 1:52 AM 5 comments: