Part of the deal for painting the Turkos was a few battalions of Foundry Wurttemburg infantry.  Unfortunately Foundry only made four poses; the officer (with outrageous muttonchop whiskers!), the drummer and two infantry figures - one firing and the other port arms advancing.  So of course to make a light infantry unit for my Wurttemburg brigade I decided I had to have a hornist.  A bit of work with cutters, scalpel, Dremel tool and file and I converted one of the drummers, using some plastic bits. 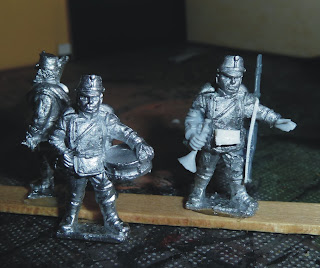 The drummer (left) for comparison with the finished conversion - hot-glued on the stick ready for primer and base coat.
The pose I ended up with was a bit dodgy - I could have modified the left arm a bit more but didn't want to risk stuffing up the figure so he's a bit 'no no, after YOU sir!' rather than blowing his horn!

I ended up with a small unit of 12 with command stand.  The muttonchops on the officer figure are wicked!  Hairy dudes, some of those German officers!
The Wurttemburgers wore a kepi similar to the French version - and that used in the American Civil War - but it appeared to have more of a peak to it than the crumpled French version.  I have seen some illustrations showing them in the more French style but maybe that was in the Republican phase of the war - after a bit of hard campaigning! 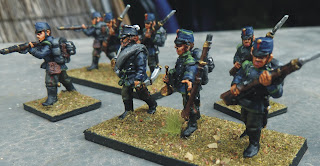 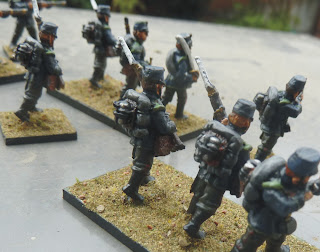 The infantry also have an elaborate furry backpack with attached greatcoat roll as well as a furry 'bread bag', although the rest of the uniform is very similar to the Prussian.

I intend to convert one of the Prussian standard bearer figures to make a complete command stand for one of the line infantry battalions.  But that's another 48 figures to paint, base etc etc, so given the amount I have to do - I might just pace myself a bit!  And I have an ACW Union artillery piece and crew for possible conversion too but I'll have to plan that one a bit more to see if it will work (and as I don't know anyone who makes Wurttemburg artillery crews!)  So the next ones perhaps will be the Perry's Guard Lancers. 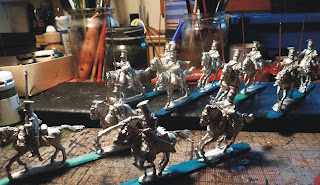 They're such beautiful figures, I couldn't resist putting them together after leaving them in boxes for months.  The boys are now assembled and glued on the sticks, ready for primer.  I'm thinking of doing them up as Berg Lancers (everyone seems to do them as Guard Dutch or Poles) to be a bit different.  From what I can see there is no major work required only a paint job.  The only changes I've made to the figures themselves is to replace the bendy lances they came with with some of my brass ones.  They are deadly too - already stuck myself a few times!
It'll be good to get back to my favourite figures to paint - Napoleonic French cavalry - and it'll be a nice break before tackling my FPW Prussian allies.
As before, click on the pics to enlarge, feel free to leave a comment.
Cheers,
Doc
Posted by Doc Smith at 9:47 PM 4 comments:

Well, despite some family dramas and the dreaded return to work we have actually managed to finish a few more FPW French units, both for myself and on commission for my FPW partner in crime and chief lead pimp for our ever-expanding FPW collection for whom I did three battalions of Turkos - the Foundry figures (Zouaves) this time - making up the 2nd Regiment of Tirailleurs Algeriens.  Combined we now have nearly two of the three regiments of Turkos. 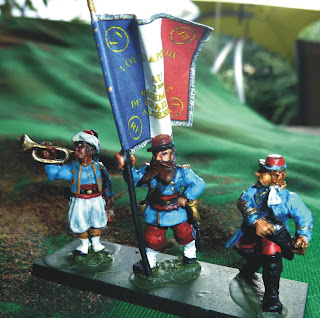 The command for the 1st Bttn of the 2nd Regt - a bit of minor conversion work on the standard bearer who was otherwise a Maximillian Adventure type: Turkos bearers didn't sport epaulettes so off they came! Note also the bases aren't flocked - my mate has his own special 'mix' so didn't want them done with my 'orrible flock! 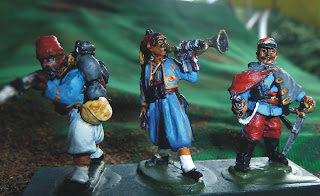 The 2nd Bttn command - the bugler is one of my figures who, despite his height, seems to blend in OK.  I love the Foundry officer in the cape - sooo dashingly French nes pa? 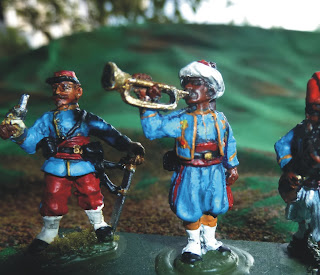 And the officer and bugler of the 3rd Bttn.  The three battalions are a nice mix of figures although I prefer my own deeper bases - and not a drop of Army Painter shade on any of 'em folks!

The 2nd Regiment of Tirailleurs Algeriens
In addition to the Turkos I managed to finish my regiment of cuirassier thanks to a few extra figures in greatcoat I acquired from said lead pimp!  Thanks to his generosity and having an extra odd-man-out figure with my dragoons, I was able with a bit of conversion work after raiding my plastic spare bits box, transform the dragoon and one of the cuirassiers into a command stand. 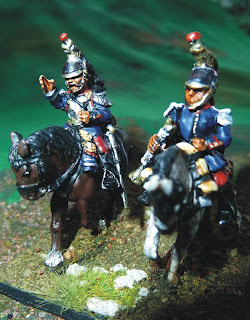 The addition of the cuirassiers in wet weather gear enable me to field a full regiment - formidable messieurs! 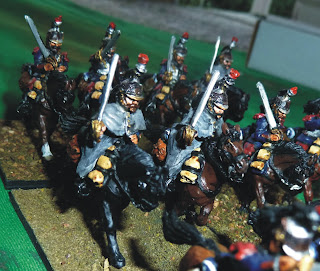 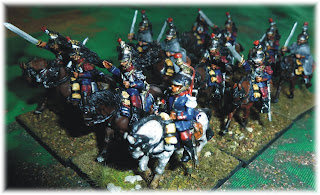 Last but not least I re-vamped my cavalry brigade/division command stand.  In this I just used my spare Chasseur d'Afrique on picket as mon General's escort.  The Chasseur is in a late war kepi, used more in the Republican phase of the conflict but [Gallic shrug] zat ees a minor detail, non?  And 'e still looks tres tonifiant in 'is tight sky blue jacket and baggy red britches! 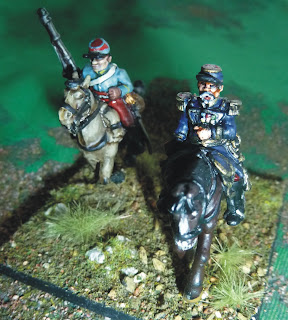 Mon General  we have seen before but still haven't got a positive ID - possibly a mounted MacMahon figure?  Who knows - he's in charge of the cavalry now! 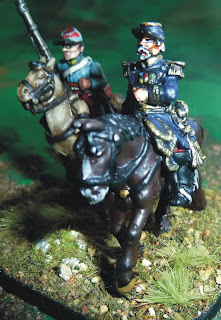 Well that's it for now - still got masses of figures to choose from to start next. So many that deciding which is a bit of a struggle. Should I continue the FPW theme and start on the Wurttemburgers or perhaps go back to Napoleonics and do my new Perry's Hungarian Grenadiers or the Victrix Landwehr  or even my Perry's Polish Lancers?  What do my regular blog visitors think?
Cheers,
Doc
Posted by Doc Smith at 10:57 PM 5 comments:

A quick check of the blog stats showed me the 70,000 hits milestone coming up, so I thought I'd make a quick post on some figures I have recently worked on - made some time ago but needing a retouch and  some fixing after recent breakage.  They depict the famous Australian Light Horse cavalry that served in the Middle East - Palestine - and on Gallipoli (as infantry) in WW1.  I have a personal connection with these as several of my ancestors were Light Horsemen who took part in the legendary charge at Beersheba - one of the last great (and successful) cavalry charges in history.

One ancestor was with the Tasmanian 3rd Light Horse who secured the hills next to Beersheba, the other managed to get into Turkish Headquarters where they disarmed the circuit charges set to demolish the wells - the only substantial water for several hundred miles.  The maps he helped himself to are still part of the Australian War Memorial collection - I remember a few used to be in the hand of the Turkish officer model that used to be on display.  But another I discovered years later in an old army trunk and now takes pride of place in my father's study after I restored, mounted and framed it for him. 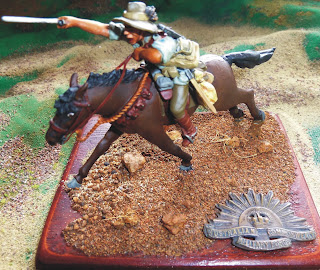 The figure is mounted on a wooden base with one of my ancestor's original 'Rising Sun' Australian slouched hat badges and depicts one of the 12th LH regt., composed mainly of Queenslanders and Tasmanians. 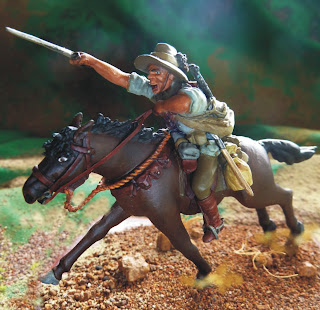 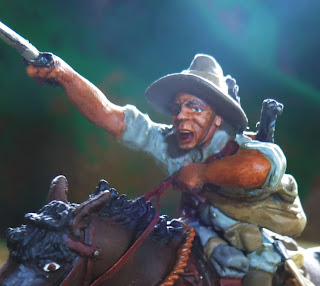 I started the flesh off with the usual pale tones but highlighted and used repeated washes to get that sunburned look.  The horse was the normal coloration of one of the 'Walers' - beautiful horses of legendary toughness, intelligence and endurance (bred mainly in New South Wales - hence the name) of at least 16 hands or more - big men on big horses! 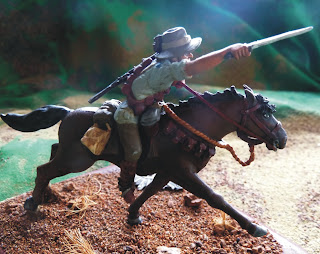 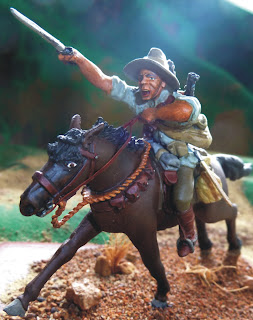 They were armed with the famed Lee Enfield 303 and not armed with swords (as they were mounted infantry) charged home against the Turk entrenchments (with their machineguns and covering artillery) with their 18 inch bayonets! 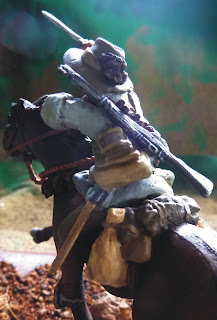 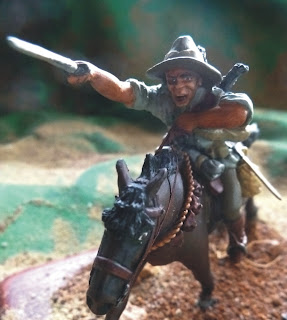 The second figure is also an ANZAC (Australia New Zealand Army Corps) - one of the Tasmanian units on Gallipoli.  Both figures are of Australian manufacture but I cannot recall the maker.  Not a bad sculpt though - I just wish our War Memorial sold them rather than a lot of the foreign crap (and totally unrelated models etc) that they do sell!!!  I shouldn't grumble though - they kind of make up for it with an excellent bookshop covering nearly every aspect of Australian military history. 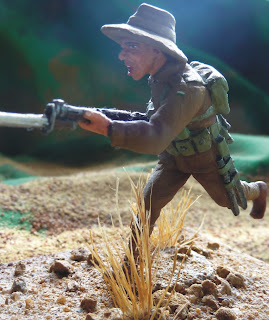 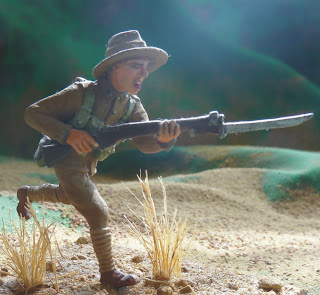 Well, that's it for now.  I've just counted up all the figures I've got scheduled for painting in 2012 - nearly 500 of 'em - I must be crazy!  And that's without doing any of my ACW Confederate army or my WWII German paras and vehicles.  They may have to wait until I retire next year!  Still, just about finished the Turkos for Doug before I make a start on my Wurttemburgers.  Because the latter only come in a few poses I've had to do some extensive conversion work to make a standard bearer and a jaeger musician for the light infantry command stand.  But all that is to come - when I have time to blog!
Also a very BIG thank you to all my fellow bloggers who have visited and supported my humble blog, provide me with a constant source of inspiration and encourage me to continue my quirky contribution to blogdom!
Cheers,
Doc
Posted by Doc Smith at 9:33 PM 3 comments: