First post of the new year - only taken a month and nearly longer after the storm that came through yesterday evening and damaged my house. A few nervous moments atop a ladder desperately trying to clear hail out of my roof gutters as water started to come through my ceiling!  Crisis averted, I've remembered to photo the new Perry's Napoleonic Austrians I've just finished.

The grenadiers complete my Reserve Div brigade (4 x 16 figure battalions, two German, two Hungarian).  They can of course double up for larger Black Powder units. But the two others I admit I've been pestering the Perry's to make for years - Jaegers and Uhlans (Polish lancers in Austrian service). Finally they did so late last year so I bit the bullet and ordered them in time for Christmas.  Well worth the wait - beautiful figures (as you'd expect) - particularly the Uhlans. 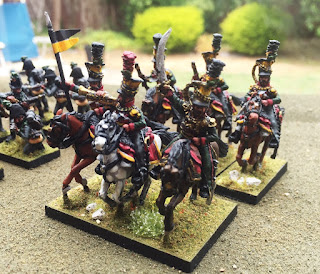 Initially disappointed the range only included skirmishing figures, the Jaegers are also beautifully done and my 16-figure unit of them came up a treat as well.  I've grown to like the Jaeger's action poses as at the end of the day, they're only doing what Jaegers are supposed to do, right? 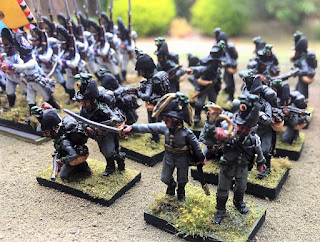 The Grenadiers suit the marching poses and the only complaint I have about them is that the heads & packs conversion pieces came out a week or two after I ordered them!  Could have saved $$$ with a conversion set but there ya go... 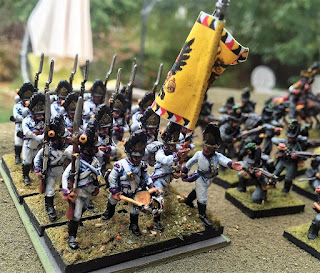 The foot figures all finish off brigades - the second Jaeger battalion for my second infantry brigade.  trouble is the Austrian formations were so huge (and unwieldy in the field) that to reporoduce them at scale for Black Powder games takes several body-weights in metal (and plastic) as well as a second mortgage.  But they are so nice... so I had to get a full regiment of Uhlans (18 figures) of which I've just finished painting the first six. 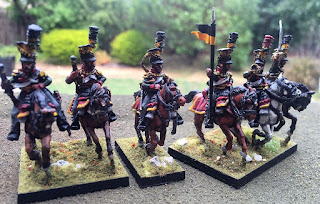 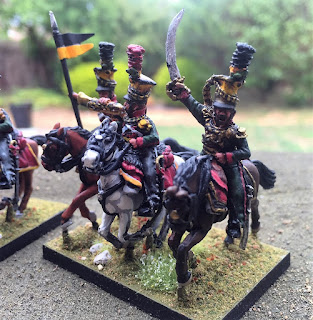 Just another 12 to go [sigh]... then another two battalions of infantry to beef up the line brigades. It never really ends, does it? 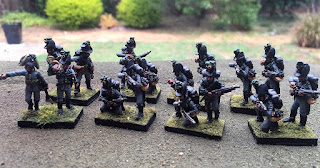 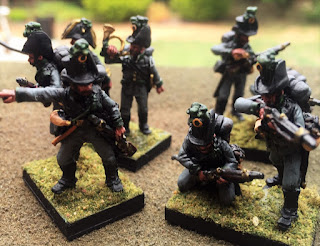 And the view from the back. 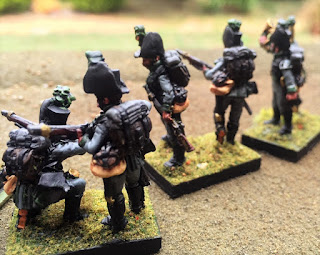 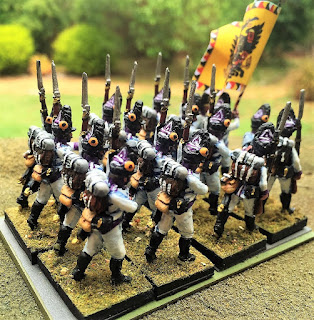 And a last one of the Uhlans as they bid a farewell... 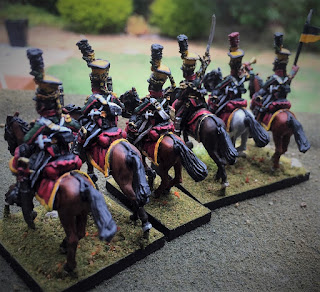 That's it for a bit until I finish the regiment (1st Uhlans recruited from the Hapsburg's Galacian holdings) A fourth regiment was raised by the end of the Napoleonic Wars with Austria's recovery of its Polish provinces, temporarily lost to the short-lived Duchy of Warsaw. They remained in Austrian hands for over a century until the fall of the Hapsburg Empire in 1918.  Here endeth the history lesson. Happy Australia Day to all my fellow Aussie gamers and bloggers.