While between Kokoda games I decided to get stuck into my Franco-Prussian Wars figures and now having finished the Prussians, paint up the French.  I'd done about half the cavalry but with various figure swaps and new acquisitions, had a small brigade's worth (and command) to do. 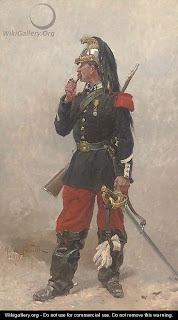 I used the Alphonse Neuville painting of a Dragoon of the period as a reference - great artwork I reckon!

The figures are mostly early Foundry and represent a Dragoon regiment, a small Cuirassier unit and a mounted command (general & escort).  Finished they represent two small cavalry brigades - one light, one heavy. 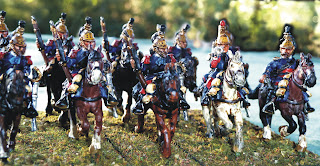 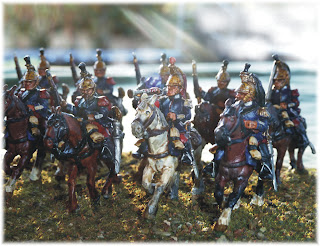 The French trot out to meet the enemy in the afternoon light - en avant mes Amie!

Of the Dragoons the command figures are particularly well-sculpted. Dunno who did these for Foundry although the Perry's did do a lot of their FPW range I believe - the officer in particular is a classic if he's one of theirs or not. 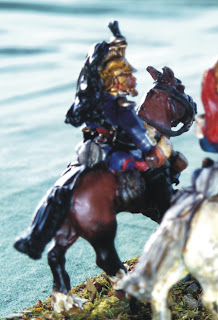 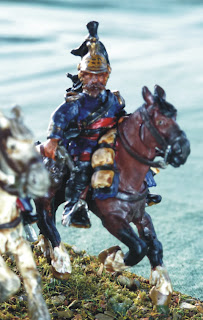 The trumpeter is not too shabby either, as French trumpeter's go! 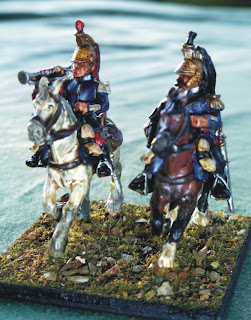 The other mounted command is of mixed origin - the Dragoon escort is Foundry but the mounted general (who looks to be a mounted figure of French FPW General McMahon) isn't.  Slightly larger than the other Foundry figures at 28mm? - the early Foundry are closer to true 25mm.  Mightn't be appropriate but he'll do for my cav bde general. 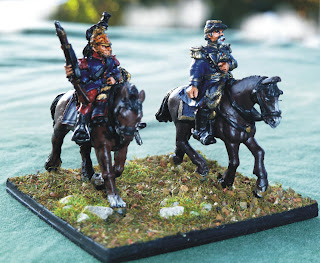 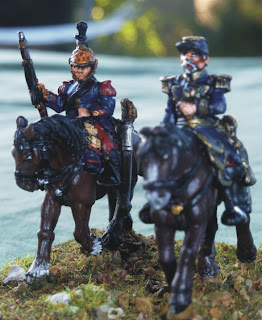 Pardon Mon General - but you appear a little out of focus zis morning!

The others finished painting and basing are the Cuirassier of which I managed to obtain 8 figures (but alas, no command).  They are smallish (true 25s) early Foundry that come with separate sword arms in resting or charging poses.  Not the greatest figures in my opinion but hey, they're cuirassier - so what's not to like? 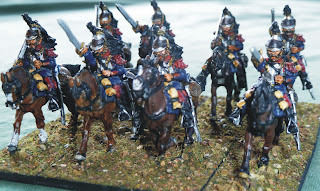 We are small but we are MIGHTY - chaaaarge!

Followers of this blog may have noticed a certain trend in the posts. I admit to a fairly eclectic mix of historical periods and even the very odd bit of fantasy BUT if there's one lot that are truly over-represented here it'd be French cavalry.  Well, they are pretty boys ain't they?  Second Empire nearly as nice to look at as the First. One'd be forgiven for thinking my Napoleonic armies consist mainly of French and mainly of cavalry. They aren't and they don't but somehow there are still heaps of cavalry to paint up - Perry plastics and metal - which I will have to have another serious go at soon. 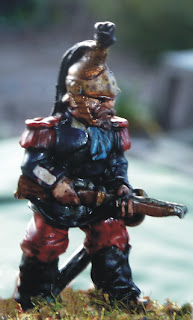 One thing that happens when collecting so many figures is that there's always one or two left over that you don't know what to do with.  The FPW French cav are no exception as I ended up with a spare dismounted dragoon (could do with a few more of those - still on the hunt!) and a late (Republic period FPW) Chasseur d'Afrique - who was going to be my general's escort but is now officially the scout!  Nice looking figure so I felt obliged to paint 'im! 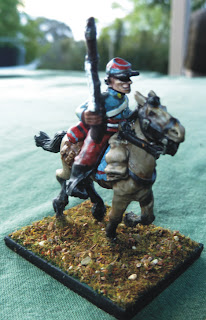 But my FPW French cavalry are finally finished - I now have all the cav, artillery and commands done and seven battalions of infantry also finished - with another seven to go! 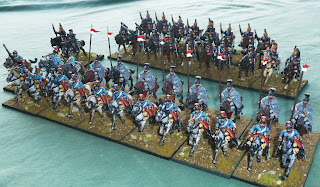 The complete cav: Chasseurs d'Afrique in front with Guard Lancers behind, the Heavy's (Dragoon & Cuirassier) in back and cav command in between.

Just finishing a battalion of Turkos (Algeriens mon amie) to go with the Zouaves to make up one infantry brigade.  The plan is to have another line brigade (x 4 bttns @18 figs each) and one of Guard, of which half the figures are now done.  Once that is completed I will have finished the biggest wargaming projects I've ever taken on - two complete and complimentary FPW armies. Now just to find a decent rule set to game them with...

Finally after much waiting we had the eagerly anticipated first full-on action between the (so far) victorious Japanese and the hard-pressed and outnumbered Allies. And closely following history, a bloody encounter it was.  The Japanese launched a full-blooded assault across the cleared area opposite Isurava creek. At 0500 hrs in the morning with the usual light drizzle and mist, it was pitch black and visibility for both Japs and defenders negligible.  The cleared area opposite the Allied positions was set up with trip wires and attached HMGs cover set overlapping lanes of fire. One major quibble I had was the lack of ANY illumination for the defenders - they carried no star shells in the heavy mortar support (historically correct) only HE and smoke - but it appeared there were no flares either which was a ridiculous oversight in my opinion.  This severely hampered the vastly outnumbered defenders who for the most part simply could not acquire the masses of Japanese storming across the cleared area in front of their positions.  This in turn had dire consequences for the Allies. 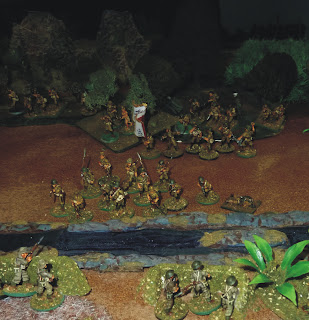 The Japs attack across the cleared area - the lead unit, caught by our HMGs has just stalled in front of the Allied position.

Those they could acquire, they opened up on and started to inflict heavy casualties almost immediately.  But it was not long before the first of many disasters struck the Allies.  While the trip-wires worked, the HMGs had barely got into action before being spotted by the Japs and shot to pieces or mortared into oblivion.

Something's hit the trip-wire: an Aussie Vickers HMG opens up on the invisable enemy

The clearing itself, although littered with fallen trees, did not pose any obstacle for the fast-moving Japs who crossed it in one move and were soon amongst the Allied positions.  If you didn't spot the Japs in the open - and I rolled excruciatingly poorly in trying to do this for most of the game - they were on top of you in the next turn.  If by some miracle you did spot, if you did not wipe them out with your shooting (difficult to achieve with the numerically larger Jap units) they inevitably failed their Gut Check and BANZAIIIEEE!!! - right at you for a bit of hand-to-hand.  You had to rely on the normally useless snap-shooting (hit on a 1 with a D6) which was rarely effective enough to even up the numbers in the following hand-to-hand.

What the Mgunners were shooting at: the Japs successfully laid smoke down to cover their left flank from the enfilading fire of the other HMG.

The other problem for the Allies was the sheer numbers - the two nine-man sections initially engaged were faced with no less than eight sections of Japs (the Jap sections nearly twice the number in size of the Allied equivalent).  If you managed to spot AND successfully shoot one section down, the other you didn't manage to acquire either spotted and shot or charged into you. 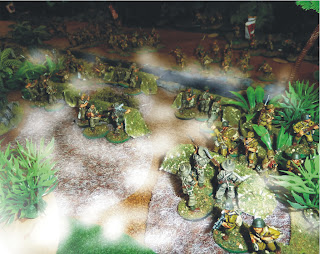 An example of the confused fighting - the Japs on the right got in amongst us and were wiped out but those on the left passed right over our positions - and in the dark neither managed to spot the other for five turns!

Nonetheless the Aussie section of the 2/14th (regular AIF veterans and historically magnificent soldiers) gave good account of themselves in the confused fighting, wiping out the first unit of Japs in their lines for the loss of only three men.  But they were soon faced with a second, then a third group of Japs and their firing made it easier for the Japs to spot them and bring their superior fire-power to bear on the Allied positions.  The inevitable result was that the Japs started to overrun us. 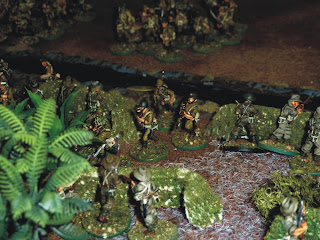 As the Allied losses started to mount up, a large gap appeared in the Allied position. All of one section and most of another wiped out (basically leaving the platoon HQ section and by some miracle our forward observers), the Japs soon poured into the hole and attacked our second line of trenches. 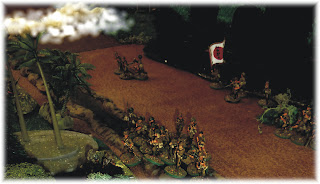 The second wave of Japs pour into the Aussie position - notice they successfully laid more smoke to cover their right flank and mask it from one of the two surviving Allied HMGs.

At this point things were looking decidedly grim for the Allies - there was no stopping the Jap assault.  Nonetheless there was some success for the beleaguered Allies and I'm happy to report that the 2/14th company sniper managed to pot a Jap officer in their command unit. That's in the dark against a fast-moving target - not a bad effort at all!  We also had better luck on our left under Allied 2/14 commander Michael who rolled much better on spotting and more consistently on shooting - cutting up several sections of Japs and preventing the entire Allied position from collapsing under the sustained Jap assault. 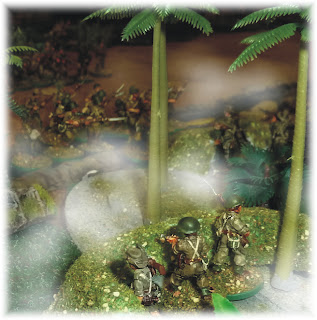 The view from the 2nd section position - you can hear 'em coming but you can't see a bleedin' thing!

At this point, with the survivors of the first platoon fleeing into the jungle one step ahead of Jap bayonets, it was decided there was nothing to be gained from engaging our second line of defence and the remaining company platoon, which was successfully withdrawn. This was also hazardous as it required us to disengage from the enemy who were already in amongst our positions, but we managed it without further serious losses. 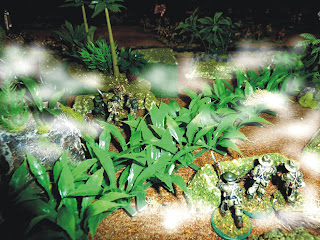 The surviving platoon HQ section (in the middle above) - note all the empty entrenchments in front of them where the 1st and 2nd platoons of A coy, 2/14th used  to be!  The half dozen survivors have already scarpered (OK - routed!) and the 2nd line of defenders are about to do the same.

While things did not go our way - our dispositions made a difficult defence impossible under the well-directed and constant Jap pressure - it was nonetheless a well-fought and enjoyable encounter.  My redoubtable opponent Loadmaster (aka Dave - a devoted follower of this blog so he tells me - and he blows a mean bit of derriere-smoke too!) certainly got the better of me in the end - the final protracted hand-to-hand on the right flank decidedly going his (i.e. the Jap's) way. But at least we managed to out-run 'em! 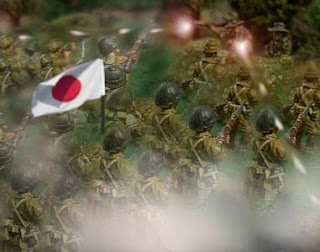 Another fantastic 'atmospheric' action shot from Greg Blake - one of the Jap commanders - showing his lads going in while the Aussies once more unsuccessfully snap fire (over their heads at point blank range too!)

I should also thank Big George for his gaming room and hospitality and of course Andrew who once again organised everything.  Against the inscrutable cunning of the Jap commanders (Cameron, Greg, George and Dave) the Allied commanders Michael (2/14th) and Ian (2/16th) prevented what could have been a complete disaster - started by my initial crappy dice-rolling! 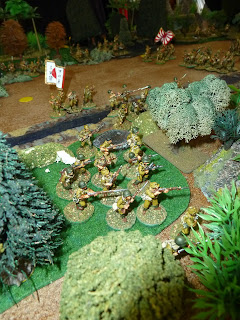 The victorious Japanese overrun the Allied positions - the shell hole in the middle of them is where one of our HMGs used to be!

The Allies will now consolidate their positions at Isurava and await the continuation of the Jap attack (some 2,000 bayonets against about 8,000 Japanese!) We have to stop the Jap's advance or at least slow it down - at the same time preserving our only AIF veteran formations available - the 2/14 & 2/16th battalions.  The 39th militia have fought magnificently but are battered and exhausted and as for the poor old 53rd who just arrived (my command) - well, lets just say it may not be a good idea to throw them straight into battle!

We are now into the crucial stage of the Kokoda campaign with Isurava to finish and Milne Bay still to fight.