Not an era or even gaming set I'm into or have any plans to start collecting BUT I am the first to admit the Crusades game I had last night was FUN. I was the Muslim forces - Saracens - commander of a kind of ancient ISIS! With John as Crusader commander and Andrew as our rules guru adjudicated my introduction to the rules system.  Lion Rampant is a quirky little rule system not without its idiosyncrasies but its a fairly straight forward gaming mechanism that's easy to pick up - once you get the hang of it the games goes quite quickly. It can be surprisingly hard to get kills - horse against armoured infantry do not have an easy time of it - they are tough buggars to crack. Missile troops can be effective  - but not overwhelmingly so. My horse archers were all cross-eyed and in four(?) rounds of shooting (and two failed activations) they managed to kill just one Crusader! Whereas my opponent's armoured crossbow wreaked havoc on my mounted units and nearly did for the Muslim commander as well before finally being beaten back ('battered' but still intact!)
I rolled better than I have in years with three rounds of uninterrupted activations for all my units and decided to get stuck in immediately (well I rolled "rash' for my C-in-C!) but my melees on my right, where I'd concentrated my cavalry were unsuccessful and my mounted bow in particular were useless. On the other hand my opponent John's Crusaders, particularly his crossbow, were very effective, fighting off two of my three mounted units, destroying one, with both infantry units battered but still intact.

The Muslim foot did not get involved save for the archers who fired twice at long range (18") without much effect before finally getting more hits moving into normal range. Crusader armoured infantry are remarkably hard to kill and the killing was largely left up to the Men at Arms and Sergeants mounted units.  Unfortunately the Fierce Foot came the closest and being genuine wild men would have stood a good chance in melee - ran out of time before they could contact the Crusaders. I gambled all with my C-in-C attached to a Men at Arms unit who charged the crossbowmen that had been giving me such grief from behind the wall.  Once more they proved hard to kill and rallied - battered but intact - rather than fleeing the field. My last chance as my unit was reduced to half strength. It wasn't enough and on the count - 23 to 18 points - John's Crusaders had more units left on the table such as the valiant (not) monks who spent the entire game hiding behind a wood - shouting encouragement no doubt!

Well it was a nice change from the usual historical gaming and a good introduction to Lion Rampant rules which we'll be using for our forthcoming 'Hammar of the Scots 1297 - 1314' campaign - I've been recruited as King of the Scots! (great - we know what happened to most of them!)  My thanks to Andrew for organising the game - and apologies for forgetting all my desert terrain for the game (doh!) Thanks also to Jolt Games in Mitchell for the convivial gaming venue and my darling wife (Minister of War and Finance) who drove me halfway across Canberra and back again so I could enjoy my game!

For our forthcoming Crete/Greece/Nth. Africa campaign (Chain of Command or Bolt Action) game (note a lot has not been decided!) I have been encouraged to do up my 25pdr field gun with Quad and limber from Perry's WWII British range.  First off I have to say its a beautiful model with a good crew with the range of functions including the rammer and two loaders (one with shell, one with charge). Rather than crowd the lot on the same base as the gun I've divvied them up.

So basically you've got the gunner seated, twiddling with the elevation, a second gunner adjusting the sights? then the loader (Number 3!) has finished ramming home the charge and has closed or is about to close the breech.  Watching on is the NCO in charge and the two other loaders who are next to the limber, holding shell and charge ready for the next shot.

This is another variation of the two bases together with the Quad, which I have not based up. I think the separate limber and crew base works well either way. 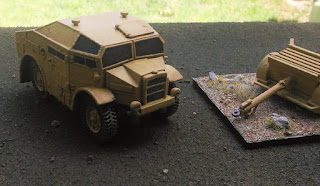 The Quad is also solid resin with an open-able command hatch.  I thought seriously of chopping up one of my binocular command figures (with mortar crew I think) and putting him in with the hatch open but in the end couldn't bring myself to do it - although I may  change my mind at some future date!  I don't think the Quad needed to be based as well as it can be more easily used or removed for gaming purposes. I haven't put any markings on it as I haven't decided yet whether it'll be Aussie 9 Div or Brit RHA. 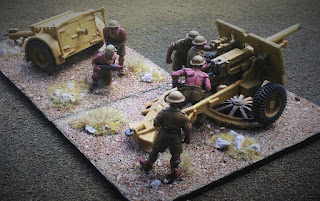 Anyway it's a great model and I can't wait to get him into action! 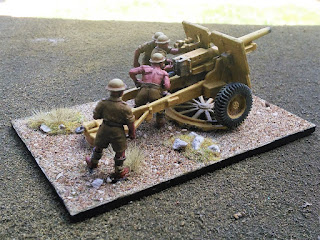 Note I've used the barrel without the muzzle brake so it will fit in with the earlier Mediterranean stuff. Anyway I thought I'd post this before my Warlord DAK etc, arrive and the painting frenzy begins again!
Posted by Doc Smith at 10:18 PM No comments: