I confess I hadn't been down to the Lanyon club for ages.  The illogical situation saw me drive miles across town to have games at Jolt but not 10 minutes down the road...   Well that all changed last Wednesday night when the 'Hammer of the Scots' campaign game we were due to have at Jolt was cancelled so Doug challenged me to a practice match of Lion Rampant down at Lanyon which is far more convenient for both of us. Besides which, Lanyon Vikings is a very pleasant club and serves a mean burger (pulled pork nomnomnomnom)!

The game was a simple enough affair to get some LR experience in before the campaign proper. Doug of course being the notorious exterminator of all things Scots, English King Edward 'Longshanks' gainfully assisted by some of the finest dice rolling seen lately by his son Jack. 'Tinny' would not even begin to describe it.  You want plenty of 5s and 6s - Jack's yer man. And naturally the English had archers. Lots and lots of archers. And Mounted Knights (the Longshanks crew) and rounded off by heavily armoured Foot Sergeants - quite a formidable lineup.

Facing this lot were myself (a Bruce of some sort?) and Doug's brother Owen as co-commander. At our disposal were a unit of Foot Knights (tough but sans horses so no 'wild charge' dammit) and three units of Foot Sergeants (the long pointy pike wielding variety made to draw the blood of the unwary gamer - ouch!), another mob called 'Fierce Foot' which are lightly armoured sword wielding maniacs (our 'wild charge' boys) and Bidowers. Ah yes, the Bidowers. The only archers the Scots possessed and only a half unit of 'em! Did I mention they could only shoot 12" to the British archers 18"? No yew trees in Scotland it seems.

Young Jack's superb dice rolling saw the English advance across the field while us reluctant Scots failed again and again. With the exception of the Bidowers. They at least finally advanced within range and actually killed a longbowman or two before being turned into human pin-cushions themselves. First unit down. Next up were the English Foot Knights. These toughnuts advanced within range of the Scots Fierce Foot who, being fierce and thus quite unhinged as well as unarmoured, charged into the nearest unit, the English knights.

After loosing three units to one on the other flank the Scots Foot Knights finally, after the 3rd or 4th try, advanced into range of the English Mounted Knights. In our first stroke of luck the English Knights failed to get their charge off and the Scots were able to catch them at the halt in a counter charge.

Great game - only went the Scots way at the last moment.  Those Mounted Knights are very tough buggers to kill and would not break two round after Longshanks got the chop! Seemed like a lot more Scots died (again) - been a bit of a theme in the campaign thus far - although this one was just a practice (unfortunately) as I reckon after Wallace's early demise, doing Longshanks would even things up a bit!  But Doug takes great delight in chopping up Scotsmen and getting Scotsmen to chop up Scotsmen, so I'm sure he'll be back with a vengence in the next phase of our campaign. 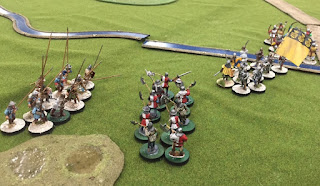 Lion Rampant is a relatively simple and medi-evilly bloodthirsty system that's great fun to play and thanks to Doug, Owen and young Jack for a beaut evenings wargaming. Club's a great venue and it was good to see Ian and Greg again - and look forward to contributing to the next 'Little Wars' con later this year!
Posted by Doc Smith at 12:22 AM No comments: