In anticipation of our Bolt Action el-Alamein games this weekend I was asked last week if I had any spare Italians - which I did - but all unpainted.  To come up with some Italians I've had to pull all stops out and paint up at least a full platoon's worth, with armour too!

I'm pleased to say that in under two weeks I've now painted and based an entire platoon of Royal Italian Army with HQ section & heavy weapons support, armour in the shape of a Semovente Assault Gun and an M13/40 medium tank; even artillery - a Krupps 75 & crew. Its the most productive I've been in years and I've quite enjoyed it - WWII stuff in general being much less fiddly to paint than the usual Napoleonics or my most recent project, the Napoleonic Mamelukes & Ottomans. 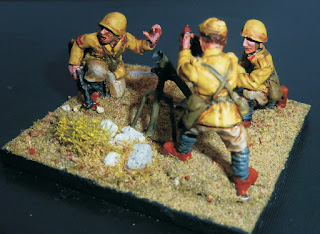 The Italian light gun and crew were a bonus as I discovered I had them spare amongst the Greek figures I got for my earlier Crete campaign project. You'll note the lack of any sophisticated gun-sight on the piece - this was not a manufacturer's fault as most came without modern gunsights or indeed (as the Aussies on Crete found) none at all!  Typical of how badly equipped the Italian army was, the Aussies were amazed at just how well the Italians gunners used their antiquated guns. From what I've read of Australian accounts of North Africa, the Italian gunners were also respected as much as elite units like Bersaglieri or Parachustisti as they generally fought with their guns to the last man and shell. Interestingly Rommel's criticism was not of the Italian troops but of their senior officers and in particular the quality of their armour.

Some 70% were tankettes - most little better than Bren carriers and quite useless against Allied tanks but of the rest two did match it until the advent of more and better Allied tanks at Alamein. The Semovente AG was as effective as the German STuG as its low silhouette and 75 gun meant it could knock out all but the heaviest Allied tanks although the lack of crew protection (earlier versions being open topped) was a serious drawback. 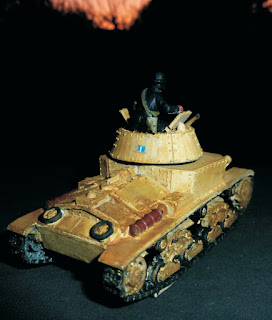 Likewise the M13/40 was a decent enough tank and had a 47mm gun which was better than the British 2 pdr but its plate rivet construction meant it was a nasty tank to be in when hit as the rivets had a bad habit of flying around inside the tank. Even if it wasn't disabled quite often the crew were - hence the Perrys surrendering and running away Italian tank crew figures which unfortunately I didn't have a chance to paint up! 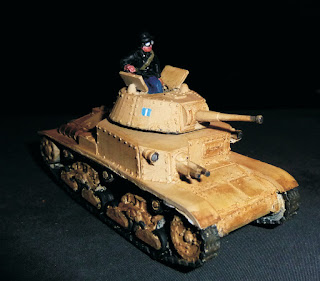 Well that's it for my WWII Italians - the ones I did manage to paint up anyway.  I still have another M13/40 and a platoon of Parachustisti which I intend to do up as the famous Folgore Div. at Alamein but that together with my new Perrys Fallschirmjaeger - which I'll paint as Ramke Bde - currently winging their way from the UK will have to wait.  I'll try and get some photos of the game(s) this weekend for a future post as well. Ciao amici!
Posted by Doc Smith at 12:46 PM No comments:

Yikes! Its been over a month since the last post which means this has gone from a monthly to more of an occasional blog. Hmmm..  In times past I would have worried about that but work and family life ('other stuff') seems to get in the way. I've not had a decent game in months either for much the same reasons. But despite this the figure painting continues and I'm nearing the halfway mark with my Ottoman Turk/Egyptian Mameluke army with the Mamelukes finished and now the Turk's Nizam-i Cedit - their attempt to build a European-style national army. Note these guys were in virtual competition with the Janissaries, the latter of which were essentially dragooned (mainly) Christian slave boys provided by the despicable Devshirme system (similar to the Mamelukes as well). 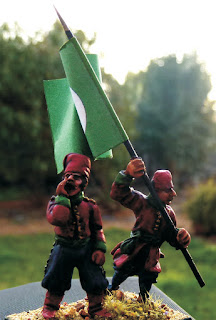 The Porte depended on this elite of fierce Muslim converts to provide the backbone of the Turkish army for centuries and it is no surprise that they became a powerful force sometimes even dictating who became the Ottoman Sultan!  In the end they were massacred in 1826 (slaughtered in their barracks) and most of the survivors executed, largely by a version of the Turkish national army - themselves successors to the Nizan e-Cedit of the Napoleonic period. 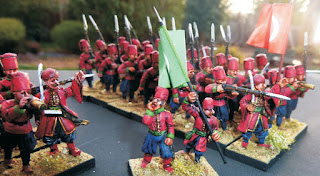 The Nizams actually worked well despite the opinion of many Europeans that they were a barely organised rabble. In truth they were relatively well equipped and trained at first by European officers. Their Turkish officers were a bit of a mixed bunch by all accounts - court favourites of the Porte getting the plum appointments etc, but when it came down to it they generally acquitted themselves well. Napoleon faced them at Aboukir during the Turks attempted invasion of Egypt (they lost that one big-time) and also at Gaza (lost again) but surprised the French by fighting like demons to the last. In fact Napoleon was so impressed by the danger the few thousand survivors posed to his tenuous line of supply that he had them all killed (a very Ottoman-like gesture) in a slaughter that besmirched his career and reputation.  He finally encountered them at Acre where a small orta (regiment) of about 400 joined with a motley collection of Turks, Syrians and British sailors and marines under Sir Sydney Smith to completely stymie Napoleon in one of the great turning points in history.  All of which makes for endless 'what-if' wargaming possibilities. I think the French in Egypt one of the most neglected and underrated of all the episodes of the Revolutionary/Napoleonic period.  The whole enterprise was astonishing in its scope - the largest (successful) sea-borne invasion force at least in modern warfare, before the Allied armada at D Day in 1944. Had Napoleon been successful in the siege of Acre, it would have opened the entire Middle East to him - there was little to oppose a march on Istanbul and there was nothing between him and British India. The forced French retreat back across the waterless Sinai to Egypt was a disaster unparalleled until that in Russia thirteen years later.

The Brigade figures I've just finished are sculpted by the prolific Paul Hicks and are some of the nicest figures around - as good as the Perrys in my opinion.  If I have a criticism its a minor one - as discussed in a previous post about the Mamelukes, the ankles (and fetlocks) are slender so that they bend easily and can - if you're not careful - break off from the bases.  If like me you use a hot glue gun to attach figures to painting sticks, when finished painting use a hair dryer to soften the glue before removing them from the sticks. The glue is easy to clean off the bases and there's no risk of the bends or worse.  The marching Nizam's muskets are also slender and I did have a partial breakage (the only one out of 60 figures I must admit) which required some superglue reinforcing but that's more just a hazard common to all metals - how many bayonets have snapped off before, during and after painting etc?  [My repair trick for that nowadays is supergluing hard plastic ones rather than trying to reattach the broken metal]

Anyway, pretty pleased with the way they turned out. The flags are sort of conjecture - the green one is anyway - but they match the first Turkish national flags that appeared around that time.  Nizams may have carried unit standards similar to those of other Turkish units like the Janissaries but the flags appear unique to them during this period.  The next lot to tackle are the Janissaries and I am unashamedly going to plagiarize those wonderful Old Glory ones that Vinnie has on his Lonely Gamers blog.  If I can paint them half as well I'll be very pleased indeed. BUT for the moment I have to drop everything and paint WWII Italians in anticipation of my first game in ages next month - a Bolt Action Alamein series of games. So I'd better stop blogging and get cracking on my Italians!

I've just now looked at the photos and realised that I've done something that's punched the red up to a horrific purple-pink - dammit!  They did NOT look like that when being processed for the blog! Grrrr....
Posted by Doc Smith at 9:41 PM No comments: