My new Napoleonic Polish infantry arrived the other day and I just had to temporarily 'down tools' on the painting of the Perry's Guard Lancers and paint a few Poles up.  I acquired these figures from Roger at the 'RTB AT LARGE' blogspot - he in fact has painted the complete range thus far on display and you can order the figures you want so it's well worth paying him a visit.

The figures are Paul Hicks designed and are some of the best quality castings I have seen for a while - very crisp and clean with little if any trimming, cleaning etc required before painting.  Also the detail is nice and raised which makes painting the fiddly bits like buttons etc a breeze in comparison to other metal figures. 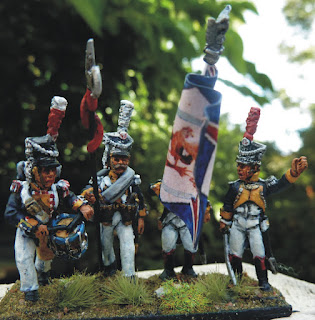 I decided to paint up a command stand of them and the figures above represent the 1st Battalion of the 1st Regiment, Vistula Legion, 1810-13.  The first battalion also carried the old legion flag that dated back to the Polish Legion in northern Italy.  I found a copy of that original on the web, downloaded it and using my graphics Coreldraw program, turned it into the standard carried by the'Port Aigle'. My intention is now to paint up two battalions of that regiment - 48 figures in all - but the rest after I've finished the lancers! 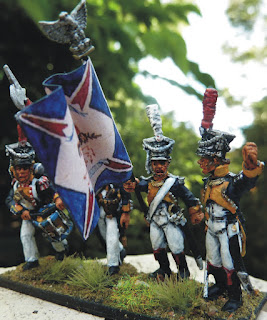 As I said before, the detail on these figures is quite remarkable, easily as good as Perrys and the faces nicely done and well animated without being too cartoonish.  All of which makes them easier to paint.  I did these in a day - nothing too fancy and I left out detailing the faces as I normally would - but was pleasantly surprised at how good a result I got in half the time it usually takes me (I confess that I am old and rather slow!) 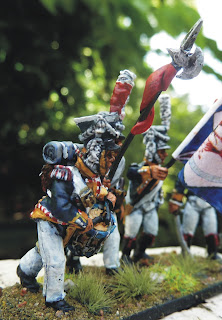 I particularly like the drummer - you can get two variants of him.  For the Vistula Legion of that time they wore the same uniform as the rest but with white and red (Polish national colours) beading on the collars, cuffs and turnbacks.  Usually painting such fiddly detail is a real pain but on these figures with such clean detail its a breeze and for which I and my rapidly failing eyesight are grateful! 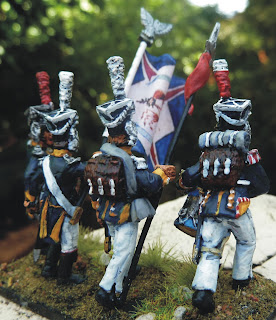 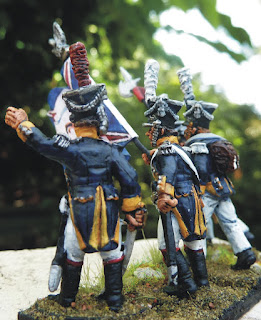 As can be seen, the detail from the back looks as good as the front. They really are wonderful figures.  After waxing lyrical about them, I do have some minor criticisms (piddling really, hardly worth mentioning... but I will!)  There are some skinny bits - particularly the bayonets, a few of which snapped in transit (even so, very little damage after travelling over 12,000 miles!) but the good news is that the superglue works very well on the whitemetal used, so they are easily fixed.  Another small problem is the flagpoles and Eagle Guard halberd  which are very thin and prone to the bends.  I've kept the originals on mine but a bit of flagpole did break off. If you are worried I recommend replacing them with florist's wire etc, or something a little more rigid. 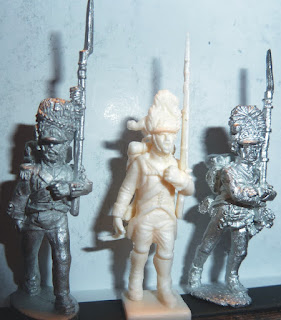 A word on scale: the other thing to be aware of - and its not a criticism - is that they are large '28's, so I've included the picture above for comparison.  The photo above shows a Paul Hicks Polish Grenadier on the left, a Victrix Austrian Grenadier in the middle and one of the Perry's new Hungarian grenadiers on the right.  As can be seen the Hicks figure is between the Perrys and the Victrix in size - I've always maintained the Victrix figures are 30mm and the Perry's are a consistent 28mm so I'm thinking the Hicks Poles are about 29mm BUT they come on thick sturdy bases which makes them look a bit taller than the Perrys.  They mix in well but care will have to be taken when basing so they don't tower over the Perrys if you are putting them together on the table.

That said, WOW! they really are beautiful figures, very reasonably priced and Roger tells me a lot more are planned (my vote goes for the Polish horse artillery!) and I will definitely be ordering more of these beauties too!