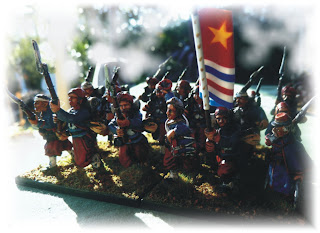 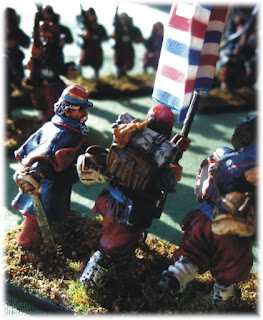 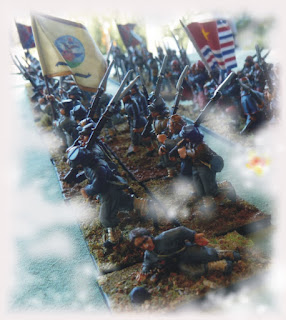 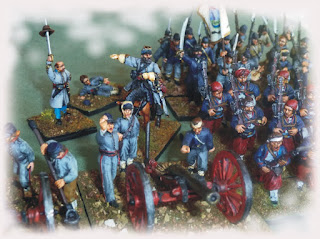 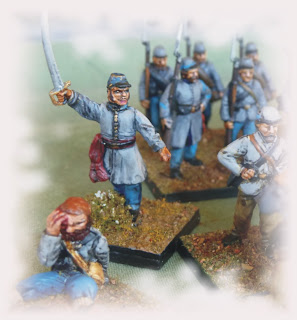 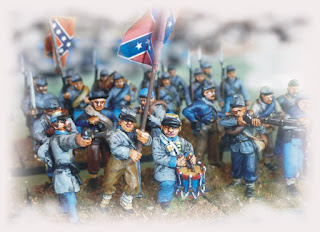 As is the usual way of things I was distracted by yet another part of the collect that demanded attention.  I did make a good start at the Poles but had also to finish of my FPW figures such as the Wurttembergers (done) and also paint up a regiment of French dragoons for a mate (and in part to pay off a lead debt).  No sooner that I had finished all this then the boys announced that they were going to do an ACW campaign using Fire & Fury rules.  So drop everything, we're doing the Antietam Campaign.

Well, turned up at the club and played the opening battle (Foxes Gap, South Mountain, 14 Sept 1862) with command of a Confederate Brigade. Once I got the hang on the rules, I had a great time fighting a real ding-dong battle on the right flank.  The matter was in doubt literally until the last turn when the Rebs pulled off a bit of a coup, stopping the much more numerous veteran Ohio Brigade (all Germans who spoke no English, so I'm told). Very unusually ( for a wargame) I actually captured an entire regiment of them after a very hard fight, so naturally I'm looking forward to the next round! 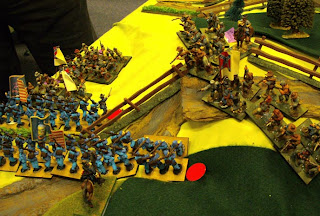 Photo: Greg Blake  The red dots are disordered markers. My beleaguered and outnumbered regiment on the extreme left was supported in the nick of time while the boys on the top of the hill got some good shooting in before charging them thar Blue-bellies and sweeping all before them - yeehaarrr!!!
There were some really nice figures and a huuuuge table to cover.  Here are some of them photoed by one of the redoubtable Union commanders, Greg.  The end result of the opening encounter was a convincing Rebel win but we were hampered by running out of ammunition - the damned ammo wagon being miles away from where it was needed!  The Confederates are reinforced but so are the larger Union forces so the next battle will be even harder. 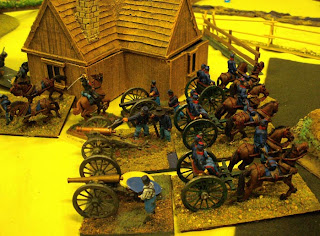 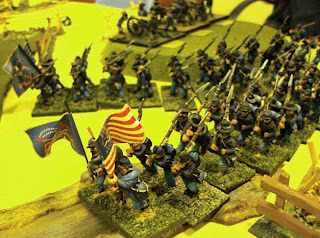 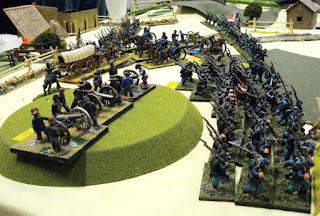 Photos: Greg Blake (Bluebelly commander!)
Naturally enough I thought it high time that I finished my own Rebel army.  It consisted of an artillery battery and a single battalion - the VMI boys that I first posted on over a year ago.  They needed to be re-based for the F&F rule system and the other figures I had painted or fixed up.  After about a fortnight's furious activity I have finally finished my Reb brigade consisting of four regiments (at 6 x 3 figure stands each) and the gun battery.

Doc's Rebel brigade
Other figures required were the mounted brigade commander, two 'brave Colonel' figures (that can be attached to regiments under my command and adds to their points)  and some casualty markers.  One of the pleasant discoveries when I dug all my ACW figures out was a regiment of  Zouaves.  These were three-piece Redoubt figures and are beautifully sculpted and animated figures.  They were in very poor condition being dreadfully knocked about and with bits missing (mostly bayonets) and chipped paint etc.  They were also painted up as a Union regiment so I set about turning them into Coppens Zouaves (Louisiana boys from New Orleans). 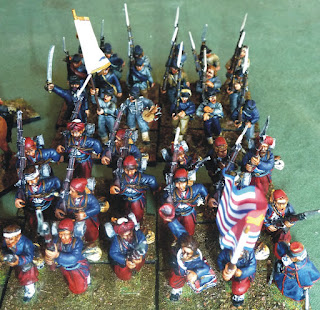 Coppen's Zouaves (eventually 1st Louisiana) and VMI cadets (integrated into the 5th Virginia?)
I chose these guys as every man and his dog has Wheat's Zouaves - the famous 'Louisiana Tigers'.  I also found out that Coppens Zouaves ended up being brigaded with the famous Stonewall brigade - along with the VMI boys - so as I already had the VMI 'regiment', I decided to create one of the few Confederate Zouave regiments. 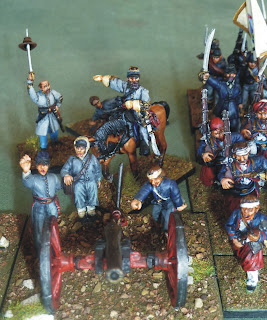 The general says "Advance!" - & one of the VMI's famous 'Apostles'
I should have cut down the base sizes for the guns too but I couldn't bring myself to do it.  For only a few mil I would have ruined really nice basing and risked damaging some of those wonderful figures.  I decided to leave them as is. 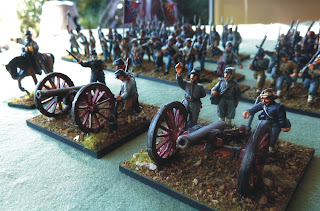 I think the VMI cadets are Redoubt figures too (although I could stand corrected) - whatever the maker, they are wonderfully animated and varied figures - even the casualty marker! 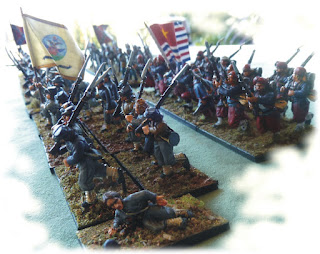 VMI boys lead the way!
The rest of the figures are a mix of a few metals (like fat-headed Dixon figures) and plastic Perrys.  The plastics turn out quite well although because they are not as well defined as some metals like Redoubt, with my failing eyesight they are harder to paint up well. That is to say, you can still paint them up quite quickly to a reasonable standard, but I'm afraid really fine detailing is just a bit beyond me nowadays.  Too many figures to paint - too little time! (as usual) 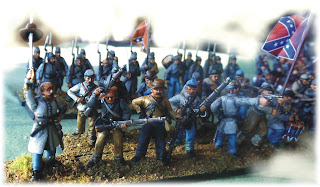 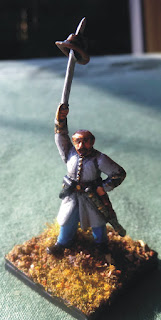 The rules we are using (Fire & Fury) require some really nice special figures - such as the 'brave Colonel' you can attach to your regiment to increase its combat value.
I tried to create a Lewis Armistead type figure with his hat impaled on his sword to inspire his men to feats of insane bravery (much like Armistead himself at Gettysburg).  The Perry's officer figure is a bit of a 'stiff' pose unfortunately but being plastic, is readily adaptable. 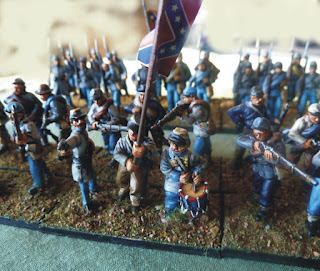 One of four Reb command stands, this one a mix of Castaway (Aussie figures - this one a French FPW officer) Redoubt and (I think) Dixon - the melon-headed drummer! 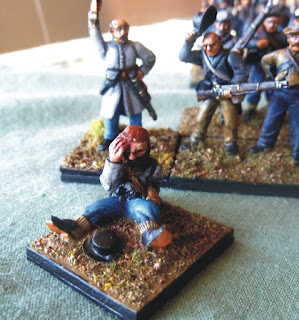 Dagnabbit - durned bluebellies hit me in ma haid! Another of the Dixon melon-heads makes a cool casualty marker. 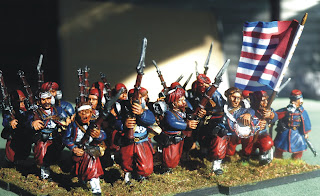 Nonetheless, my favourites are the Redoubt Zouaves.  They are beautifully made figures.  And large - it was quite a task to get them to fit the smaller (50x25mm) F&F bases.  But wow - even crowded they look even better! 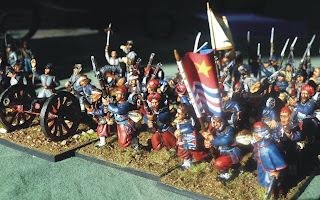 According to my research, the Louisiana star and bars flag was the one they carried into combat
Hey, why should them Bluebellies get all the good flags? 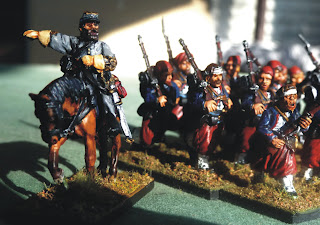 No boys - go thattaway! The mounted Reb brigade commander
The Reb brigade commander came from the Perry's metal Confederate mounted generals pack. Nice figures and the horses are superbly sculpted but one of the best command figures is still the old VMI instructor directing the cadet gun crew. 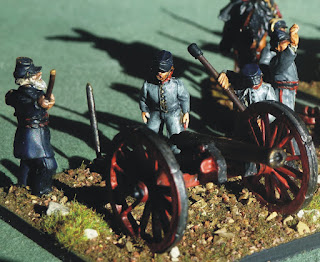 The good old Coppen's Zouaves really look the business - can't wait to get them into action! Check out that drummerboy - how keen is he? 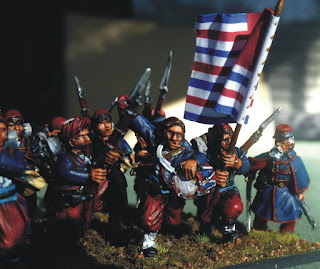 The old officer's saying 'now boy jess calm down - yer supposed to beat that thing with the sticks not yer darn hat!
Well I hope this post makes up for my long absence from the blog.  Work and footy haven't given me a break for weeks but hopefully now I'll be able to get more done and post the results with a bit more regularity.  If I don't get the Poles done I'll hopefully be able to post part two of Foxes Gap in the Antietam campaign.

Interesting factoid - by the end of the campaign Coppen's Zouaves were reduced to about a dozen men fit for combat - from the 600 that marched out of New Orleans 18 months before!  They fought bravely but even with several reinforcements, never numbered more than 50-60 men for the remainder of the war.
Cheers,
Doc
Posted by Doc Smith at 9:05 PM 6 comments: