I've decided to return to my roots as it were - if only briefly.  Kind of forced on me by a little disaster I had with this stand while I was moving some figures around.  The display cabinets and bookcase I was using had become chockkers with figures - so much so that to fit in the extra Prussians I've been painting I had to transfer several hundred others - mainly TYW & Napoleonics - to other storage.  And thats when the accident happened - my Italian Line Grenadier command got dropped.  From a great height and even being plastic didn't help.  It was carnage - they kinda bounced and shed bits as they did so. Mama Mia!  The bearer was the biggest casualty with the flag snapping clean off.  The drummer's head likewise. I may have even said several rude words at the time. 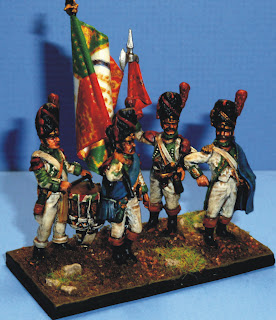 Who's a pretty boy then?  That officer with the cape doesn't 'alf fancy hisself!
The good news is the paint and restoration job went better than expected.  The paint job got a bit of a touch up too with the end result, after a bit of matt varnish, you can't see too much of the damage.  If you look carefully at the pic below, the flagpole has been repaired just above the bearer's right lug'ole!  Bit of a lump - but that's it - phew! Mucho relief! 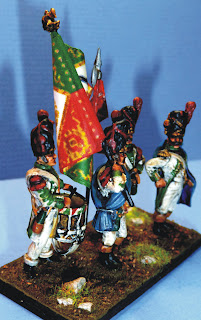 Wassamatta you - why u looka so sad? Itsa not so bad!
Itsa nice a flag - ah shuttup-u-face!
(With apologies to Joe Dolche!)
So with the strains of Joe Dolche's old hit 'Shuttupa Your Face' pinging round inside my head (I swear I heard it on the radio while I was fixing the flag bit!) I thought I'd re-shoot them with the Lumix.  No natural light I'm afraid as its winter here and gets quite dark early in the evening so one colour-balanced light and a bit of flash for one or two shots and trying without it for the others.  Not unhappy with the results. 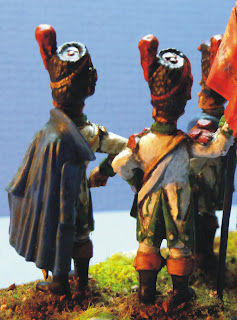 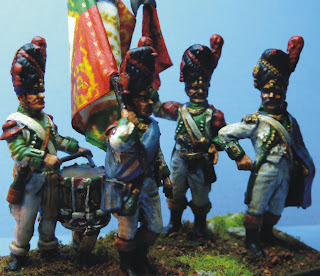 Strike the pose!
All the figures are Victrix by the way.  Made up from the spare bits from the box - so the figures and command stand are spares for when I want to field them as I also have a light infantry (Cacciattore) and a Line command stands as well for a two-battalion regiment. 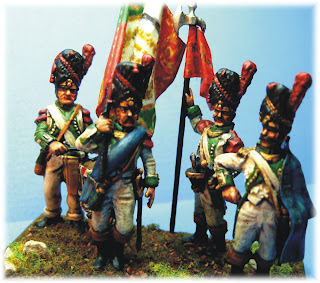 They were fiddly buggers to make up too as I recall - the figures are quite large being closer to 30 than 28mm, and with those bearskins...  mama mia!
I wonder how Victrix will go with their planned Austrians?  The Perry's are also releasing sets of Austrians and Russians too - great for us gamers as we'll be spoiled for choice - but it'll be tough for at least one figure maker I reckon and my money would be with the Perrys - marketing machine just too slick and figures too beautiful!
Hmmm, must-not-get-distracted-by-bleedin'-Napoleonics...  too many damned FPW Prussians to paint!
Cheers,
Doc
Posted by Doc Smith at 11:57 PM 13 comments: