There were also traders there including War and Peace, Dean from Olympian Games and Nick from Eureka who did a roaring trade. I think it bodes well for the future. As well as raising a few hundred dollars for 'Soldier On' for our returned Diggers, it successfully showcased the hobby and attracted quite a bit of attention and importantly, our generous hosts the Lanyon Vikings Club provided an excellent venue that was well patronised by the crowds attending as well as the wargamers.  A fine day's gaming was had by one and all and we will certainly plan to do it again next year!  Tough luck CGS - Cancon's loss is definitely our gain, from what I could see.  Congratulations must also go to Greg, Ian and Leigh who put so much time and effort into setting up and running a great convention in our first 'Little Wars' Canberra.
Posted by Doc Smith at 11:28 PM No comments:

Well I had my Bavarian artillery on the work bench for quite a while - never seemed to get enough time to do much more than a bit at a time.  Bit of a problem when you've got not one but two large Perry's artillery train to construct and paint. As usual it took ages to clean them up before putting them together and starting the painting.  Then there's the basing to figure out. I mounted them on card that was too thin so had to cut a heavier card which I reinforced with magnetic sheet. 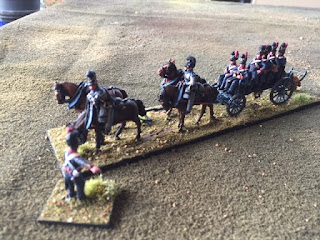 Unlike the models on the Perry's site I couldn't be bothered about the rope traces attaching the horses to the harness.  Thought about it tho...  but nah - too much fiddly effort for a fiddly job that I just wanted to get finished. One of the things I did was base the NCO separately so I could fit him in as CO for the battery. 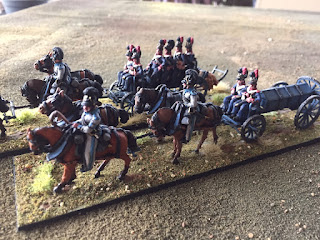 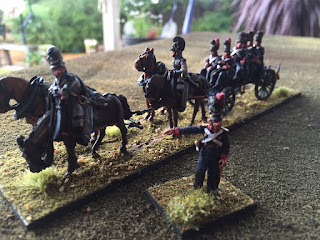 One of things that became apparent when I got these models was that with the Wurst wagon the Bavarian's were actually fielding these as mobile foot artillery. They had horse artillery (according to the Nafziger book I've got - perhaps the best available authority) but maybe after 1812? I dunno but not only were the Bavarians using a lot of captured Austrian ordinance after 1809, they also had Wurst wagons same as the Austrians used when they marched into Russia in 1812. Until I saw this model I never realised that. 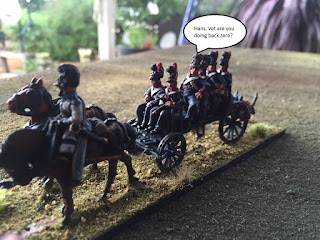 Mind you, traveling hundreds of kilometers on rough roads on one of those bone rattlers, squeezed up nice and close with your fellow gunners (and with little to hold on to by the looks of it) well... perhaps you'd prefer to walk! 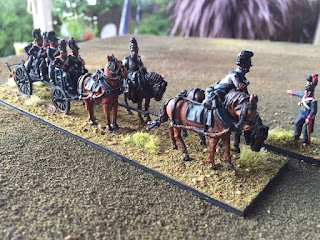 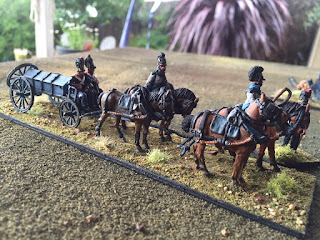 The ammo caisson comes with a removable lid and can be uncoupled from the crew trailer so I can put either caisson or gun on the hitch. Useful - just have to make up a gun to go with it! 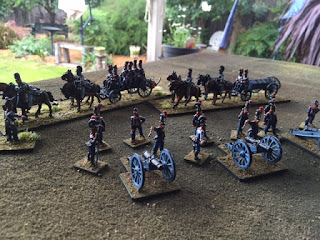 With the battery I have now completed the last of my little Bavarian army brigade. Nine battalions of infantry (5 x 12, 4 x 16) two regiments of cavalry and a three gun battery now with artillery train.

One of the reasons its taken so long is that I keep getting distracted with other armies - particularly my WWII collection. I haven't had a Napoleonic game for ages too whereas I've had a number of WWII games using a variety of rule sets, particularly Bolt Action and Chain of Command, the latter being amongst the best rules I have played. The latest collection of course has been my Italian army. Here my collection of Italian AV's has just been nearly doubled by the most fortunate acquisition of some remaindered AV from a hobby shop that just went all Warhammer - fantasy - their loss my gain! (Thanks for the tip Andrew!) 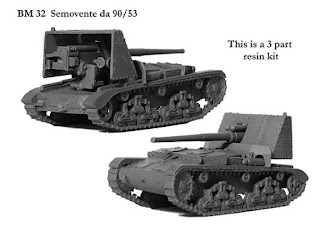 I'd seen the one of the awesome mobile 90/53s on the Perry's site (pic above) but the prohibitive price of getting it put me off - joy of joys I found one three (!!!) piece set in a box of Company B models the shop was trying to get rid of. In fact I got the entire lot for the price of the Perry's Semovente. Bargain! 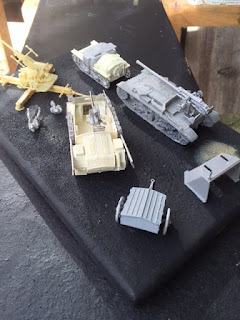 Same time I had treatment for an old foot injury which required me sitting on my ass for three days - what to do to relieve the boredom? Yep - got stuck into the Italian AVs and a Bofors I had given me  (thanks Andrew - I think!) That Bofors turned out to be the most challenging $%#@ing model I'd ever tackled! Wafer thin parts (made in Romania!) glued to the sheets of instructions underneath. Why I persisted I can't say - perhaps once I got stuck into it I became determined not to be beaten by the damned thing. But it was a close run! Being a Romanian plastic, the normal model glue didn't work. Revel have clearly failed. I ended up using a superglue which took half an hour just to set for each one of the 40 odd parts. I'm sure therein madness lies. Mental institutions around the globe full of sobbing men trying to build a Romanian plastic Bofors...

Immensely proud to say - result! The f&*^ing Bofors done (and never, ever to be done again). 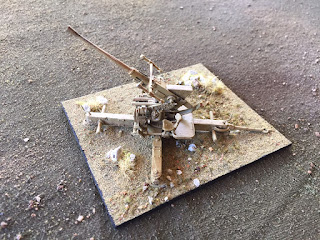 The Semovente 90/53 is still on the work bench - it had some damage to the resin hull which had to be fixed before painting so I ended up finishing the Sahariana instead. In addition to a 20mm Breda MG it has a rockin' 47/32 AT gun - how could I resist? Mumma mia - itsa biga banga for yer buck! Such an awesome model. Ended up setting it up with my other one and a Perry's Italian NCO with an SMG scouting the horizon for those Inglese LRDR! 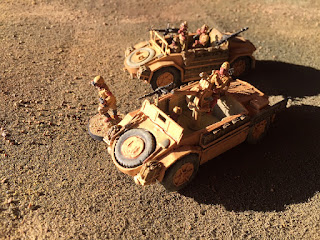 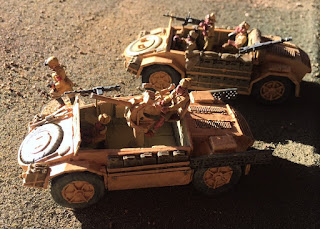 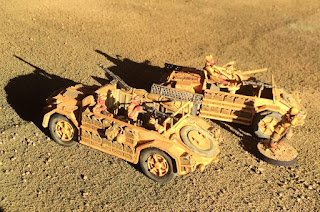 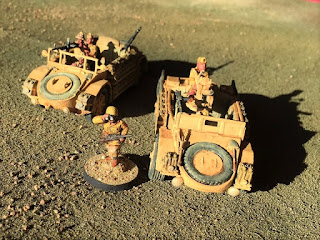 The Italians are frequently derided for their poor armour, probably because they were so often beaten in North Africa BUT I think this is wrong as although they had inferior tanks to most Allied ones, they also had the amazing Sahariana which was the equal if not better than anything the LRDG had - probably the best AV of its kind in the war. Even the L33/35 tankettes were, gunned up, more than a match for most Bren carriers and other Allied light AVs instead (as they were) used against far superior Allied armour. They also had later models of the Semovente AG which were a match for any Allied tank and they had the powerful 53/90 AA/AT gun which they mounted on the Semovente chassis. While this arrangement had its disadvantages, particularly for the exposed gun crew, it was a highly mobile, enormously effective AT gun, every bit as good as the famous German 88.  Luckily for the Allies they only ever managed to produce about 100 of these and only sent a few dozen to North Africa, most far too late to affect the outcome. One can only imagine what the result would have been if the Allies had faced a few dozen of these monsters at Alamein! Or they had used squadrons of Saharianas against the Allies in the same manner as the LRDG were deployed, history may have been very different. Also interesting to consider that all were unique Italian designs, not adaptations of German ones.

Well that's it for this post - bit of a mixed bag but a very productive few weeks at the workbench!  My next post will likely be after the forthcoming Little Wars con and the Muskets and Tomahawks French and Indian Wars (American colonial era) demo game Andrew and I are putting on. Ciao 'til then.