Well, I've survived another Christmas excessive feasting and drinking with family and relatives and also finally managed to finish that regiment of North African (Algerian) French cavalry, the Spahis.  The Spahis gained fame in the second (Republican) phase of the Franco-Prussian War after the disasters of Sedan and Metz, in which most of the French cavalry were destroyed in fruitless suicidal charges trying to break the Prussian encirclement.  Apart from a few units who escaped (such as a regiment of the Chasseurs d'Afrique), the surviving French cavalry went into captivity.

Although the Spahi were colonial cavalry I read somewhere they not allowed by law to serve in France, but such was the desperation of the French Republican government that they were shipped over from French Algeria.  In the FPW they quickly gained a reputation for their fearlessness and although not exactly inconspicuous in their colourful Arab robe uniform, were superb horsemen (superbly mounted on Arabian horses), proving to be outstanding as light horse cavalry.   Together with the surviving Chasseurs d'Afrique, they were more than a match for the otherwise excellent Prussian light cavalry.  Finally used in a role more suited for modern warfare (ironically the traditional role of light cavalry) and rifle armed, they caused the Prussians a real headache, particularly marauding behind the lines and ambushing communications.  Superb swordsmen, man for man they were also a ready match in close combat.

I started things off as usual, mounting them up on Paddlepop sticks and base-coating before laying down the base colours.
I'm not sure what make the Spahi figures are (but the horses look very similar to Australian manufacturer Castaway Arts who also do native Arabs and FPW figures) but fortunately I had a spare Foundry mounted French officer to make up a full regiment.  I shaved the figure's thigh-high boots off and used filler to create the native baggy trousers favoured by the Spahi's French officers.  For the bugler it was just a simple hand transplant from sword to bugle (supplied by a Perry's French Hussar!) to finish the command stand.


The only other bit of remodeling was the substitute of a rifle for a sword for one of the Spahis (the one holding it aloft).  The biggest challenge was painting the Arabian horses - again perhaps licence but I've made them all grays as all the historical pics I've seen have the Spahis mounted on grays.

The Spahis were formed in the early 1840s and the native-style uniform remained virtually unchanged from the 1860s until the 1st World War.

After my little foray back into Napoleonics (my first love in collecting/gaming I admit) it was back to finishing the FPW French.  I have several battalions of infantry to do and a regiment of Spahi (Algerian native cavalry).  I'm itching to get at the latter but had to finish my second Turkos battalion. 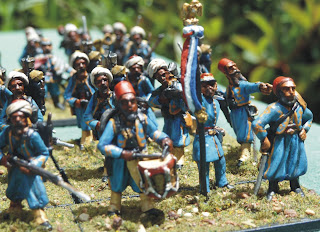 All Askari figures save the Bearer - he's a Castaway Arts - and the Eagle Standard he's holding is a mish-mash of Foundry bits!
The Askari Miniatures Turkos are really nice figures, although the very long rifles and bayonets are rather thin - I've lost the odd bayonet or two along the way (before purchase).  The figures didn't come with a Standard Bearer so I borrowed one from my Castaway Arts FPW French, then chopped up some Foundry flags to create the Eagle without the full flag, just the ribbon which was frequently carried into action.  Maybe a bit of licence here but I think it looks OK for the command stand. 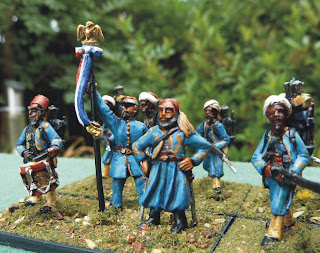 I particularly like the officer figure, who I have tried to paint as more Algerian than French
The officers were usually French but there were some native North Africans (Arab or mixed-race) officers so I've made our commander more of a native Algerian with one of those attractive Muslim beards sans moustache - what a look! [Note to self for next 'Movember': grow a mo or grow a beard WITH a mo but never, ever grow a beard without the mo!] 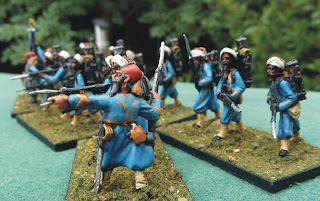 The other figure I particularly liked was the very beardy NCO (what a hairy lot they were in those days!).  Note also I've given them their full dress blue pantaloons - hey, they're the 1st battalion - they gotta look snappy!  The second battalion have the bleached linen baggy pants to differentiate between 'em. 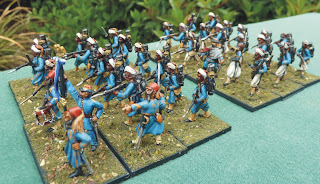 Some of these guys carry those remarkable packs that seem to have everything but the kitchen sink in them.  I read somewhere they actually were given permission to take them off before attacking, which I'm sure would have been a bit of a relief for the Turko soldats.  You can see what they packed in the next photo - very tiring lugging that lot around I'm sure! 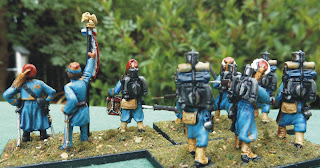 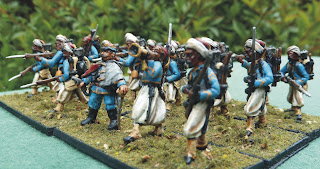 2nd Bttn command - probably miffed at one of those damned Arab types being given command of the 1st battalion,
so I've given him a bit more braid on his uniform and cap to compensate.

Well that completes my French 'exotics' - the infantry anyway - they were brigaded with a Zouave regiment and a line infantry regiment.  Just one battalion of line to finish the brigade.  Then I'll do the cavalry - even more colourful - but I haven't been in the rudest of health. A dreaded lurgy that keeps coming back, so between that and work going crazy, I'll have to leave off most of my painting until after Christmas.
I'm unlikely to post again before Christmas so for those who regularly visit my little blog and particularly to those of you kind enough to take the time and leave a comment, thanks for taking an interest in Docs' 'Art of War' for another year.
Season's greetings to all and best wishes for the New Year to you and yours from Doc.
Posted by Doc Smith at 4:05 PM 15 comments: