Well being banged up at home with a sprained ankle its probably time to do my monthly post. Nothing like an enforced lay-off to get productive with the hobby!  Anyhow I finally finished off my Perry Cossacks.  Lovely figures in well animated poses with an officer in a classic Cossack 'follow-me' pose leading his swarm or sotna (which sums up their battlefield tactics too!) 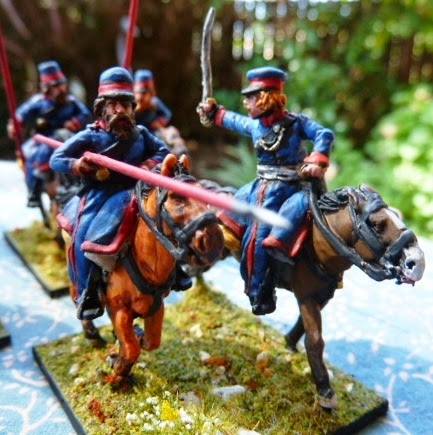 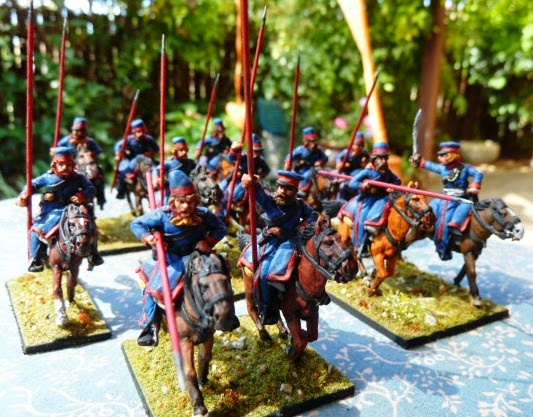 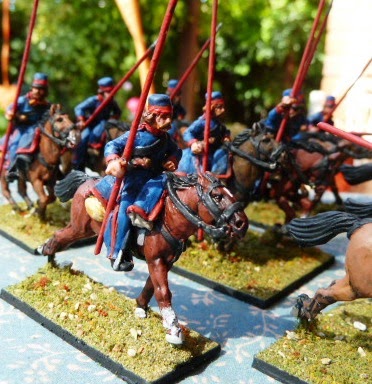 A scruffy-looking lot in simple blue uniforms (have I made mine too blue?) which fit the bill nicely. But as we know appearances can be deceptive for they were universally acknowledged as the finest light cavalry of the time. They are brigaded with my earlier Front Rank versions with the plumed fur kolpaks. And Platov - can't forget my legendary Cossack general! Also a rather nice Front Rank figure. 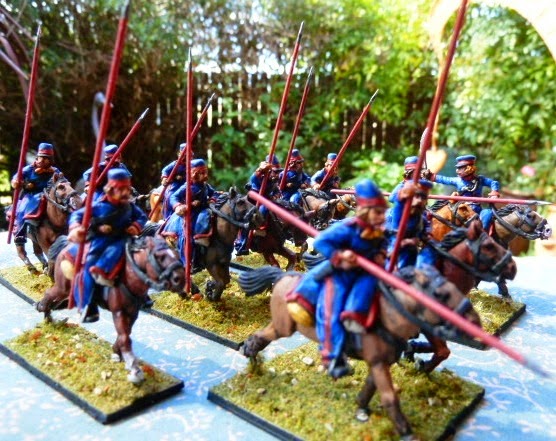 The only thing slightly out of place is the gun and crew which pedants will have noticed is of Crimean vintage. The fact it fits in at all just goes to show how little the Russian army had changed from 1812. The Cossack gunners also look very much like the Russian Opolchenie (militia) of the time - have a look at the Perry's versions in their Napoleonic Russian range. To go with them (or not) I also have a regiment of rather nice Front rank Russian lancers I've done up as the Lithuanian Uhlans. Three regiments of Russian lancers - its enough for any Frenchman to require a change of undies. 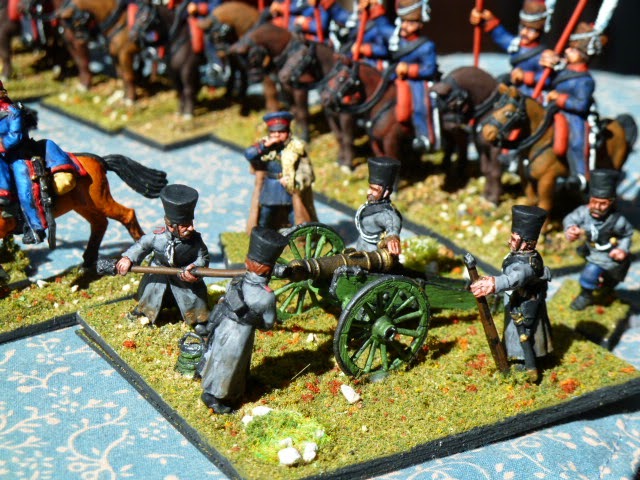 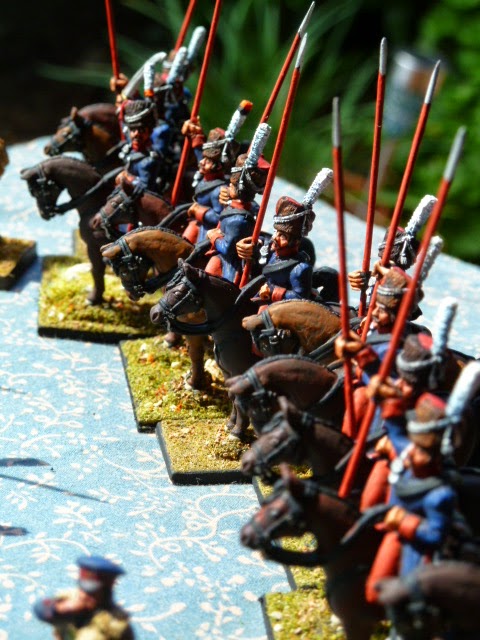 I must admit I prefer the Perry's versions only because of the poses - the Front Rank are beautiful figures but it just doesn't look very Cossacky to be just standing there holding your lance as it were! Its a pity because a more animated version would be perfect. I used the classic dark blue for their uniforms too - sans washes or highlights which may have been a mistake however, given the number of Russians I still have to paint, not one I have the time to correct! 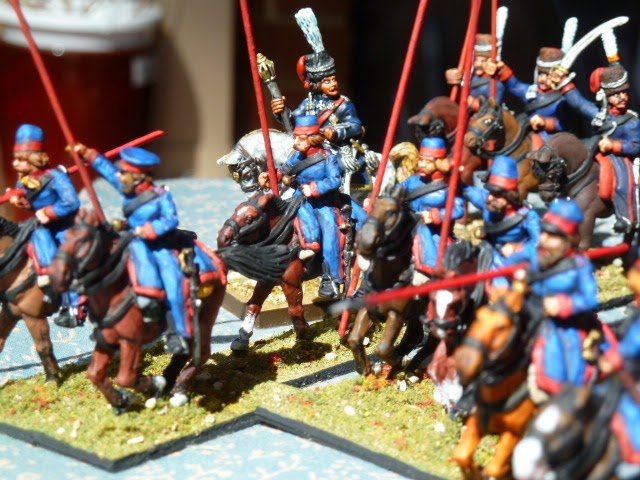 The very bright sunlight I took these photos in make the Perrys Cossacks look like they have sky-blue uniforms in comparison to the Front Rank boys behind them - but they don't. If they look too light a blue I can always put another black wash over the uniform. 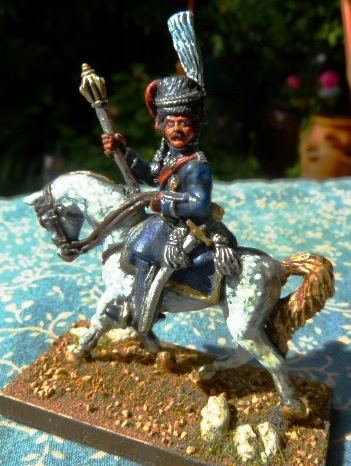 The Front Rank Platov figure - a beauty with his mace of authority and painted in the days when my eyeballs allowed me to paint theirs!  I should spruce up his base though - its a bit sparse for a commander of his stature! 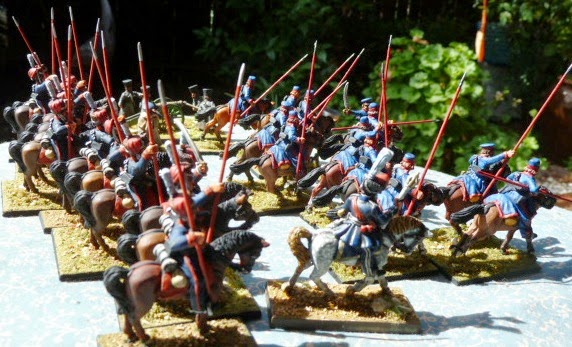 To be honest I'm not unhappy with the results.  Now hopefully to get a game with them. I've got to try and get Doug lined up for a GdB stoush - he hates Russians!  Trouble is I've only got four 24 figure infantry battalions - I need to paint up another eight - yipes!  Better get cracking then!

Before I go it would be remiss of me to mention something very exciting to 28mm collectors and gamers.  The German firm Pro Gloria have recently announced their intention to release a box of plastic Landesknechts in early 2015.  Pro Gloria make some of the most beautifully sculpted late Renaissance figures around. In my opinion these figures are as good as anything the Perry's or Paul Hicks do i.e. the standard  is incredibly high - the benchmark for figure makers; the best there is! 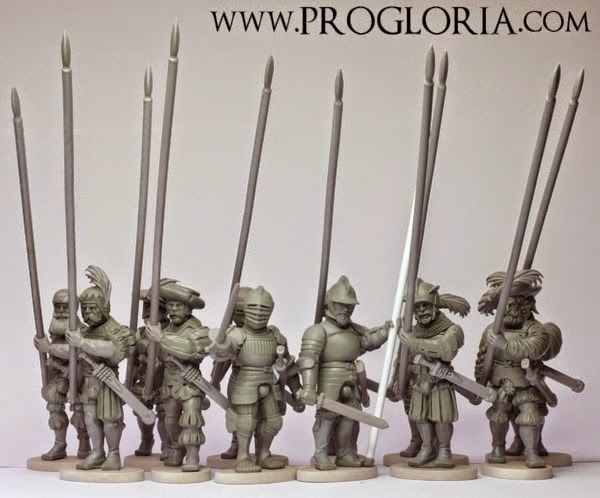 Also check out their Facebook or even better their IndieGoGo page:
https://www.indiegogo.com/projects/plastic-landsknecht-box

The latter is a very good means of funding projects over the Internet.  I'm currently examining my rapidly shrinking hobby fundage with a view to investing in these beautiful figures for my Impetus armies. They have a lot of great deals going so do yourself a favour and nip on over to their IndieGogo site and check it out.  If you spend a squillion Euros on an order they even offer to get your mug on the head of one of their figure releases!  Awesome.  Never heard of that before (although Alan Perry sculpted Michael as a squished/dead Rohan on their Muamak base) but given the standard of the sculpts they've already put up on their site, I can believe it!

Until next month, Doc out.