Our project for the 'Little wars' con later this year is to put on a Black Powder Indian Mutiny game.  I was a bit concerned that I had no figures or scenery but have managed to find some Mutiny Sepoys and got a few stands of tribals. Together with some of my Egyptian Janissaries and Mamelukes - who quite easily pass for northern Indian Punjabi tribesmen - I'll be able to contribute a few regiments. 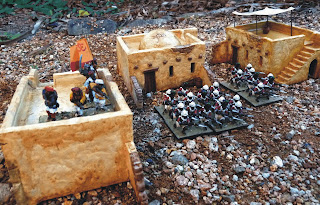 The other thing was scenery as I had nothing for a desert or native village but thanks to my War and Peace Games gift voucher (thanks to my daughter!) I got me one of the Rendera native mudbrick villages.  Its basically three of the same hard plastic models and a kit with a dome (for a village mosque) a bit more wall and shade for a stall, some pots etc, to make for a bit of variation. 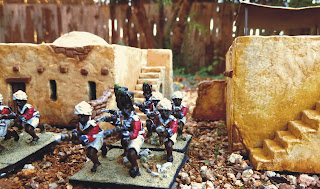 I took the photos on the gravel path in my back yard which seemed to match in best with a semi-desert type setting. I would have taken a bit longer setting it up but its winter here and my fingers were freezing besides which, I was 'loosing the light' - being winter and all! 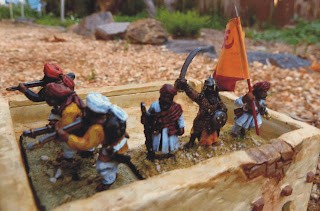 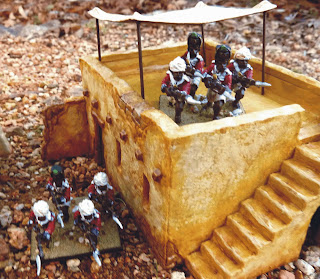 Pretty happy with the way they turned out, looking forward to our first 'test' game  - which, given all involved, is taking some organising (my sympathies for my mate Andrew - the scenario designer). It should be something different.  Which is just as well as the recent reorg of my study has revealed enough projects (read 'figures to paint'!) to keep me occupied for years. 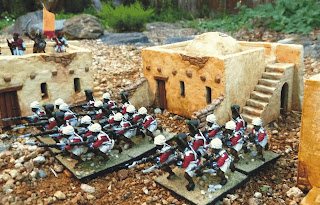 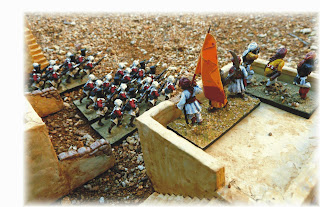 Well that's it for this post.  I have no idea what will be next - I still have Mamelukes and a horde of Ottomans to paint BUT I think I've done enough posting on Mamelukes so hopefully with luck the next will be a game of some sort as its been a while since the last one!
Posted by Doc Smith at 6:22 PM No comments:

Managed to get get another 16 or so done including  the Murad Bey or Ibrahim Bey Mameluke leader figures (white beards!) The Brigade Games figures are really nice although the horses do suffer from the at times fatal 'weak ankle (fetlock?)' disease. Basically they are well animated poses but not as solidly attached to their bases as they might be. Using the hot glue gun to mount them on wooden paddle-pop sticks for painting proved too much for several of them - one of which had to be pinned to the base - a major pain-in-the-bum. Still, they look great once mounted and finished.

There are another eight in the works to finish them off, then its Turkish infantry - Janissary or Nizam. I think. There's another 40 or so cavalry (siphahi etc) to do as well. A really colourful army to collect and I noticed Brigade have come out with more figures including Albanian mercenaries.  I feel another order coming on!
Posted by Doc Smith at 5:43 PM No comments: