Belated Blog action, another SP2 game and some dragoons.

Well as my mate Ian at the Gentlemen Wargamers club at Lanyon (every Wednesday evening - great club, great games!) said to me the other night: 'you DO know it's been nearly FIVE MONTHS since you've done anything on your blog!'  Well I laughed. You've got to be joking mate!  Er... actually no. He wasn't and it was - about five months!  Crikey how time flies.

As far as excuses go - I haven't really got one - you see some @#$%ard introduced me (OK - convinced me) to go on Facebook. I held out for years and as it turns out probably should have held out for a few more! End result is I spend so much time on bloody Facie that I have completely neglected the blog.  See? Told you I didn't have an excuse!

Anyway...   I have been up to quite a bit since my last post. On the domestic side I've seen the house vacated, repaired and re-occupied and the family mausoleum (also known as the garage) cleared out (well mostly) and renovated so I finally have an 'off-site' (as in 'out of the bloody house') storage for my little hobby.

The collection was getting out of control and the study and every other nook and cranny was crammed with more and more figures etc.  The new storage in the garage has saved my bacon (sort of). On inspection of the 'new' garage and all my fine reno and cleaning work, the Minister for War and Finance was heard to remark 'My, my you DO have a lot of little soldiers DON'T YOU!' upon eyeing the fairly significant stacks (very neat stacks I'll have you know) of boxes and trays containing all the elements of my little hobby.  She generously offered to help me get rid of more 'rubbish in the garage' - more of a threat really - which I graciously declined. And threw out more boxes (empty of course) in the vain hope of placating said Minister, and demonstrating I really didn't need her 'help' just at that moment.

Meanwhile, at t'club (I finally made a Wednesday night!) we had another (just my second) Sharp Practice game using the recent upgraded SP2 rule set. The second game went much better than the first with me resisting the temptation to disappear down historical 'rabbit holes' (thanks Doug) and just playing the rules as they allowed. I was very controlled and made no comment at Doug and Mark's outrageous  arming of ALL of the 1813 Prussian schutzen with rifles rather than the 1/3 that history tells us they fielded. Rabbit warren averted. No matter as they lurked about on the flank and despite the enormous range of their rifles, didn't really bother Owen's French who quickly hunkered down behind a solid Prussian stone wall and weren't much inconvenienced. My likely lads came under some Prussian artillery fire but didn't really suffer much damage even stooging around in the open for the entire game (see above photo). On the other hand our gun got into the action against a Prussian column marching up the road. Bit like 'bowling for Blucher' really. Knocked 'em down like ninepins but tough boys them Prussians - eight shocks but still refused to run away (although they did wisely hop over the other side of the wall)!  The deciding action of the night was Owen's inspired use of his outnumbered Chasseurs. 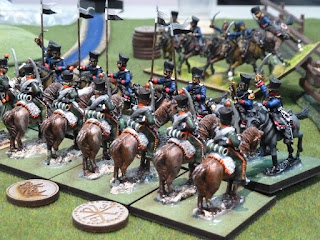 Owen decided to bring his cavalry on against the two units of Prussian cavalry opposite.  Quite a gamble that should have resulted in many dead French horsemen as his charge pulled up short on an awkward junction of fences. Quite miraculously they survived the 1st round of fisticuffs against the lance-armed Prussians, then in a second round were driven back but in the third actually drove them off! But they weren't finished yet. 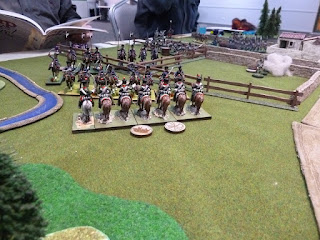 The Prussians were closing in across the table but it was the reduced French cavalry who were coming to grips with the second unit of Prussian hussars. They were at a disadvantage with two dead and two shocks from the previous combat so to help out my voltigeur formation behind the wall emptied a full round on musketry at effective range into the Prussian cavalry. I think it put enough damage to even things up a little for the cav fisticuffs.

The game was called after this as time ran out but it came down to the cav fight to decide the outcome as no infantry were close enough to get into hand-to-hand.  Probably just as well for Owen and me as 1813 French aren't that great - all the best one's were long dead in Russia!  Another game tomorrow night - this time with my Poles v Russians (or Doug's Prussians)!  The rules are fun enough and we will no doubt put on an entertaining game at Little Wars in a few weeks time but I refuse to pull apart the basing of hundreds of figures just to accommodate the latest Nap gaming fad.  I think I've come up with a solution that sees some command bases pulled apart and other individual leaders singly based. I've also make up movement trays to fit 6-8 figures for each unit.

The latest are my French dragoons which may get a run at Little Wars.  As they are the only cav unit that can be represented as dismounted I've had to produced a number of figures to represent this including a horse-holder stand and the usual officers and NCOs.  To match the mounted I have just converted one into a Mareshal de Logis Sapeur (senior sergeant sapper) replete with the bearskin worn by some elite companies. To complete I have him carrying his trusty 'doorknocker', guaranteeing entry to any gig in any village! I also gave him the blunderbuss version of the cavalry carbine which some sapeurs preferred for that 'close-in' work. 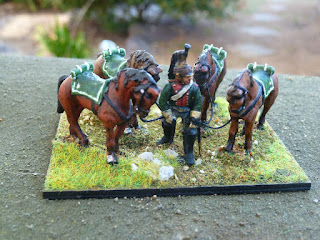 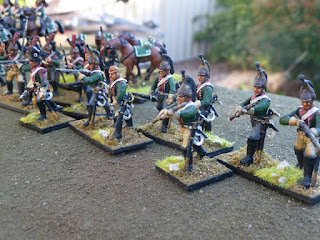 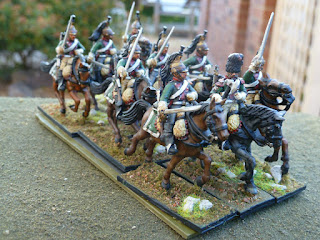 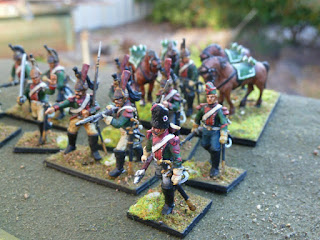 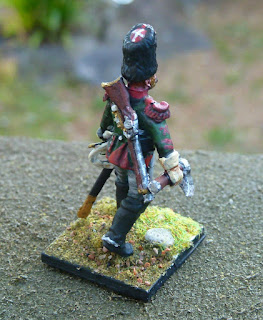 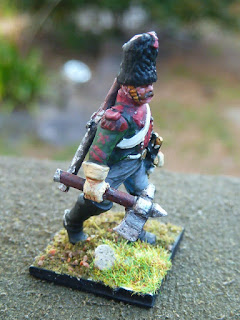 Hope you enjoyed the post. Apologies to all the followers of this blog for the lack of activity for so long - hopefully it'll not be so long 'till the next one!