Having collected and painted like mad for months Doug and I are about to trial our Franco-Prussian War Black Powder game at our local WinterCon gaming convention.  But to do so we had to iron out the scenario adaption and how the rules best apply.  The emphasis is to include historical accuracy (Chassepot v Needlegun, Krupp's breach loading artillery v Mitrailleuse etc,) but without unduly disadvantaging either side - the advantages for one are hopefully cancelled out by those for the other.  Basically if you are French, shoot the crap out of the Germans as soon as they appear (let your Mitrailluese loose!); if you are Prussian use your rapid-fire artillery to soften them up then close with the Froggies as fast as you can and use your numbers - and your cold steel of course! Vorwarts meine Kinder!

The scenario is the battle of Froschwiller in Alsace, one of the decisive frontier battles right at the start of the war.  It pit's McMahon's 1st Corp of his Army of Alsace - considered the elite of the French army - against the Prussian V Corps of Crown Prince William's III Army. The town of Worth has fallen and the road through Froschwiller is open - unless the French can hold the Prussians off.  The road leads directly to McMahon's vital rail-head at Reichshofen.  The Prussians have to capture Froschwiller by 1700 hrs that day and destroy over twelve French battalions in order to gain a major victory.  The French have to hold the village until 1700 hrs and destroy up to 15 Prussian battalions in the process in order for them to claim a major victory.  Historically, the French missed a huge opportunity to defeat the Prussians as they came on piecemeal (at first) - it would have thrown the entire Prussian invasion schedule out of kilter and changed the course of the war - one of the great 'what-ifs' of the FPW - and so a great scenario to fight. We estimate the game will take about eight turns to complete.  In our first trial we go going late but managed six turns before calling it a day. 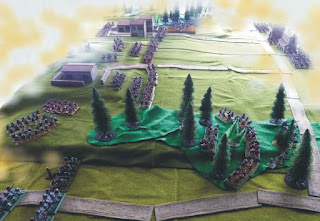 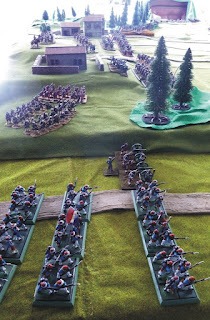 The setup at Turn 1 with McMahon's forces spread along the ridge with the Niederwald forest closest, Elasshausen in the middle and Froschwiller ta the other end - vineyards and open forest on the French left flank - a very good defensive position.

The town of Worth (in Prussian hands) is directly opposite Froschwiller (upper right of 1st photo).  The Prussians cross the Sauer river (fordable for infantry) and come on at Worth in Turn 1 and on the French right opposite the forest at Turn 2.


French defensive position along the ridge 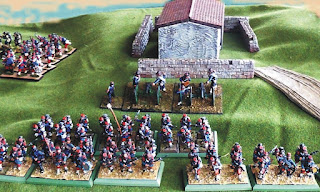 French centre on the ridge in front of Elasshausen 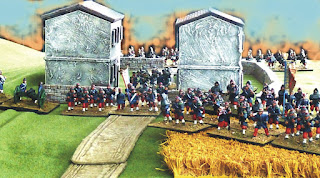 The Prussian objective - Froschwiller village - note the Mitrailleuse on the left!

As Prussian commander I realised that the longer I was within range of the dreaded French Chassepot rifles before engaging the French the more damage they could do to me.  I honestly expected my first three or four units - the first wave of attack - to be wiped out but although they sustained some casualties, the larger Prussian formations (24 figures opposed to the French 18 figure battalions) proved very resilient. 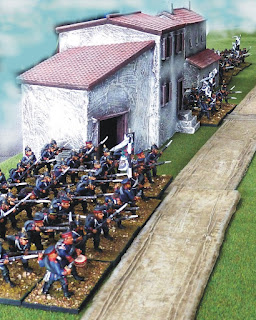 The Prussians emerge from Worth to begin the assault

Fortunately my dice rolling for my initial was good and I got my three first moves in which got me across the fields to just below the vineyards next to Froschwiller and changed formation from dense attack column to line.  Then the fun began. 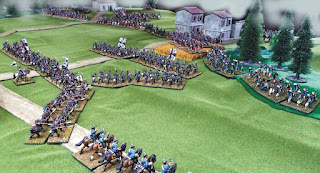 The Prussian dispositions at end of Turn 1

The French opened up with everything including the fearful Mitrailleuse - at close range! As expected the lead Prussian units soon took heavy casualties. 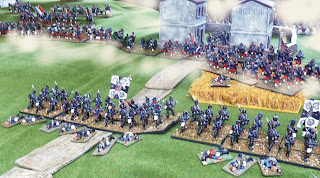 But the Prussians were also lucky as after three shots the closest Mitrailleuse jammed and remained that way for several more rounds of shooting. Although they survived their initial break tests,even with superior unit size it was obvious that they couldn't sit there and shoot it out - they had to charge in with the cold steel!  The first Prussian battalion charged the lead French one holding the vineyard (which looks remarkably like a wheat field in the above photo!) for a desperate hand-to-hand a la bayonet! 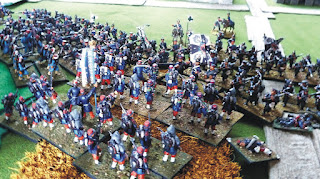 Turn 3: The French and Algerian Tirailleurs manage to hold off the Prussian hordes!

The far left of the French position was held by the Tirailleurs Algeriens - the famous Turkos - in the open woods next to the vineyards.  The French flank was not for turning either - it was straight up the guts to Froschwiller or nothing at all! 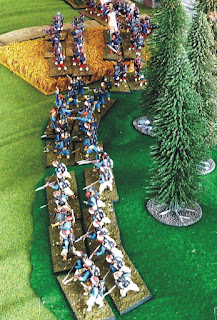 As the Prussian assault went in the Algerians were also faced with menacing Prussian Dragoons - the only cavalry unit on the table.  The Prussians tried a bold charge but steady French shooting halted them at the woods edge and forced them to retreat back to the start line at Worth. 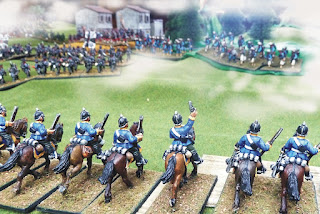 The Prussian Dragoons about to launch a charge at the Turkos in the woods - are they bloody mad? 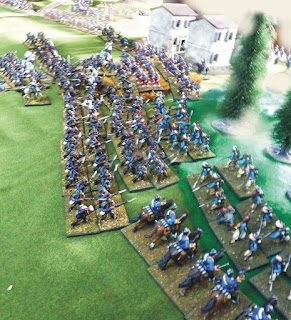 Meanwhile, on the Prussian left in front of the Neiderwald, Prussian deputy commander Dom launched his rapid attack columns right across the centre of the French position to try and drawn off French units from reinforcing Froschwiller.  In response the French launched themselves from the ridge at Elasshausen and from the Neiderwald right into the flank of the Prussian columns. 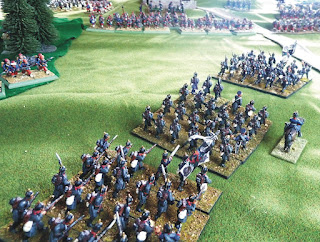 The French counter-attack halts the Prussians in front of Elasshausen

The Prussian attack in the centre did increase pressure on the French line but didn't affect the fight at Froschwiller.  After heavy shooting fierce hand-to-hand brought the Prussian columns to a halt.  The French brigade on the other side of the Neiderwald could have made quite a difference but never budged much - the curse of the dice! 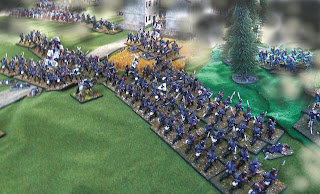 At first the Prussians appeared successful in front of Froschwiller

Same happened to my supporting artillery which got onto the table at Worth and halted just outside of Chassepot range but failed to unlimber and immediately came under effective counter-battery fire - just could not roll the dice I needed to get them into action.  However, the assault on the vineyard was successful and two French units were destroyed or broke.  But then the Turkos, after successfully holding off the Prussians to their front and driving off the Dragoons, swung around and hit the Prussian line in the flank, also bringing that assault to a grinding halt. By the end of Turn 4 the battle appeared to be in the balance. 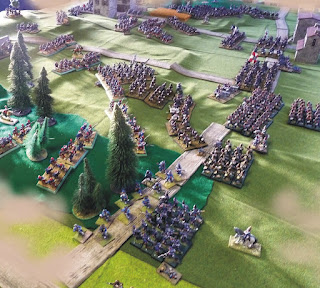 Situation at end of Turn 4 with the second wave of Prussians beginning to come on.

The French got their second battery and Mitrailleuse into action.  Combined with the great shooting from a small unit of Chasseurs that managed to negotiate the traffic jam in the town, the victorious Prussians in the vineyard were first brought to a halt, then enfiladed with one working Mitrailleuse which finally destroyed them.  The alternating rounds of shooting and hand-to-hand also drove back the two supporting battalions and with half the leading Prussian brigade dead or in retreat, the other half halted by the outnumbered but courageous Turkos, a second brigade brought to a halt in front of the French guns at Elasshausen (in the centre of the French line), things suddenly looked decidedly dicey for the Prussians! 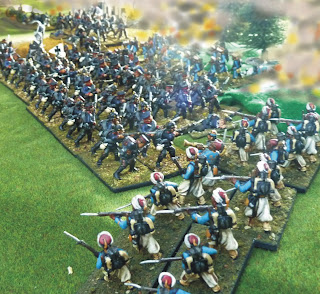 The Turkos launched into the Prussian flank and for a minute there nearly brought the whole thing undone.  Because of their smaller unit size, the added factors for flank attack still didn't give them enough to break the Prussians.  They SHOULD have but if you don't roll high enough then...   After losing two rounds of combat and having two battalions in retreat, I managed to roll just enough to save a third.  At that point the Dragoons, which everyone seemed to have forgotten about, launched a furious charge into the back of the  Turkos who had originally driven them off - ca la guerre!  The valiant Turkos were cut down to a man by the vengeful Prussian cavalry.  Nonetheless the Turkos 1st battalion managed to out-shoot and out-bayonet one larger Prussian unit while at the same time being hit in the flank by another - but showed no signs of breaking themselves! 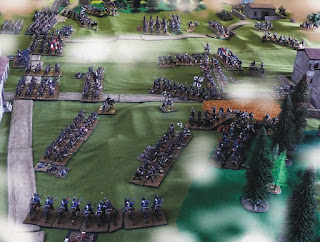 At this point we'd run out of time and decided to call a halt to the proceedings.  Technically, it was a draw as the French lost considerably more than the attacking Prussians (six battalions to just one Prussian) but still held onto Froschwiller.  The Prussians would likely have cracked the French left had the game gone on and the avalanche of jack-boots in the centre would have been hard to contain BUT the French still had reserves in and behind the town, the vaunted Prussian artillery hardly got into action whereas the French and at least one Mitrailleuse had caused considerable damage so its very doubtful that Froschwiller would have fallen by 5 o'clock as required!

What did I learn? Well, the Prussian attack was far too disjointed to be guaranteed success but on the plus side, those big battalions can absorb a lot of punishment!  I think that the rules (with some tweaking) played well and pretty much tracked what happened historically, which pleases the pedant in me.  A lot of work to do to be ready for WinterCon but I think it'll work well.  And most of all - it was FUN!

Note to self: MUST paint more Prussians (particularly casualty markers - we ran out!)