I'm glad Foundry have decided to re-release parts of their Franco-Prussian War lines.  After all, they ARE the manufacturer of the largest and most comprehensive collection of FPW figures - and the most expensive!  Amongst those released again are the Wurttemburgers.  There are only four different figures including a mutton-chopped officer and a drummer.  The problem is of course for command stands - no standard bearer.  So I ended up making one myself.  He was originally an Austrian 1866 officer - but I gave him a pair of boots and cut some slots for the unique shoulder rolls with my trusty Dremel tool.  Fair amount of work but shaped plastic bits provided the flag and furry meal-bag.  The flag bearers sling & holster is made from paper and a musket butt!  I think the lot turned out OK - and Ian Croxal's Warflag provided a royal Wurttemburg flag for 1870. 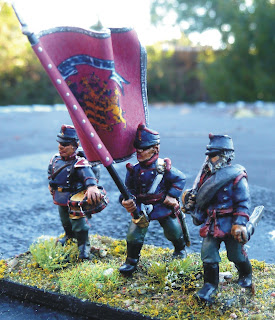 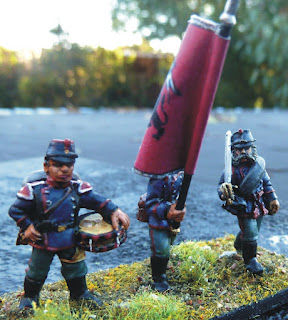 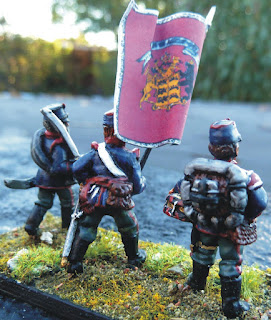 In addition to the infantry I recently acquired some Foundry Chevau Leger - Bavarian - that can pass for the Wurttemburg version.  They are a considerable improvement on the old Foundry figures - and slightly larger.  Unfortunately all the figures I got were officers (with the two sword arm variants).  To make a command stand required I make one of them into a bugler (no problem - but I am running out of suitable plastic bugles!) and another into an NCO.  I replaced one sword arm with one holding a cavalry rifle.  Again, not unhappy with the results. 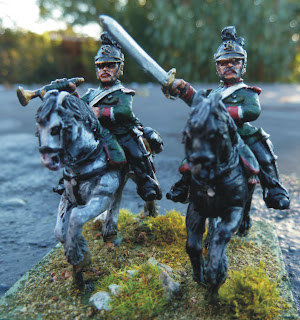 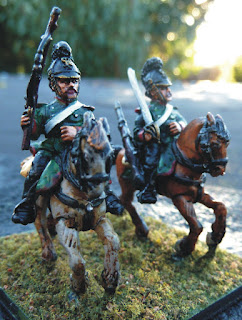 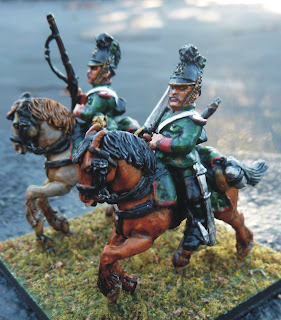 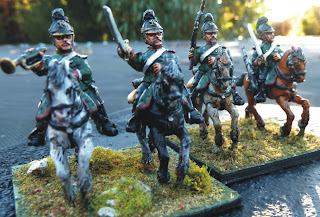 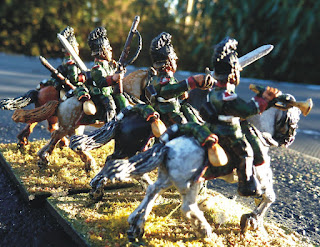 So still pushing out more FPW - still much to do, although the armies are now getting close to completion.  Frankly, I'll be glad when I've finished and can get onto some other projects including my beautiful Paul Hicks Duchy of Warsaw figures and my WW1 Belgian Minerva armoured car (the world's first!), to name but a few.
Cheers,
Doc
Posted by Doc Smith at 6:03 PM