I hope I have not disappointed the Napoleonic era fans who look at this blog but I had a think about what I'd post and decided that its waaaay too much hassle to create separate blogs - and maintain them - to cater for all the other aspects of my collection and hobby.  I have had some pages I did previously for the Thirty Years War (Wonchangers - Thirty Years War - the Poles  ) and Franco-Prussian War armies (Wonchangers - The Franco-Prussian War - the French ) but being my first attempts  they weren't very good and now appear to be corrupted so I've decided to post everything on this blog.  Hopefully it will eventually include my 20mm collection as well - if and when God/spouse, home and work allow!

To start things off I've posted some TYW stuff I just completed.  While I do not have the artistry of a Phil Olley (The Breitenfeld Blog), I figure some of my TYW stuff  may be worth showing.  So first up is some gambions I recently bought - those woven embrasures used to protect the guns - and have just mounted them up for a pair of my Culverins.  The figures are my usual mish-mash of Foundry - Old Glory - Perrys, with a Warhammer Empire artillery bits and bobs of  powder barrels, linstock, shot and locker. To finish I added a little wiff of smoke to the linstock with some cotton. 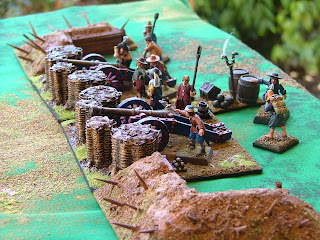 The embrasures on either side are some earlier attempts at earthen works made from plaster, toothpicks and matches mounted on heavy card. I made them for my 20mm figures but at a pinch they fit in OK with the bigger figures. 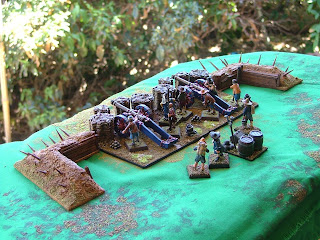 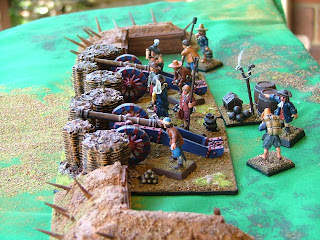 This just gives a taste of some of the other stuff I enjoy about the hobby.  Eventually I will include links to historical articles I've published and artwork like the figure in the blog masthead - which I will now have to re-do after seeing Robert's superb blog masts on his!  (http://serreslesrangs.blogspot.com/)

Like I say in my blog-blurb - its the 'art' of it I enjoy as much as anything else, so I'll start to get it together and post a bit more of those aspects.  It will not distract (too much) from my other projects like painting up the Victrix - the second group of Italians are now nearly half done - and I am still champing at the bit (pun intended) to do the Perry's Cuirassiers!

In the midst of this all I will be doing the Master of Celebrations for Christmas at home with four great kids, my gorgeous and very patient wife, two fish (lazy beggars - they get nothing this year!) and the dog, Nachos (breath like a Turkish toilet but a very cute little guy nonetheless).

So to all who view my blog - a Merry Christmas to you and yours from Doc and his tribe. 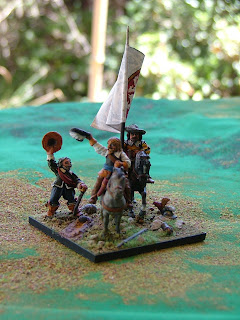