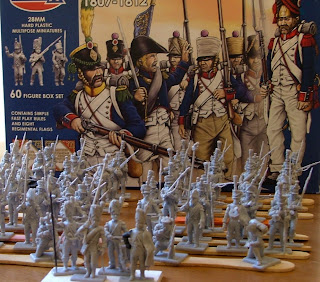 The box of Victrix made up and on sticks ready to paint. 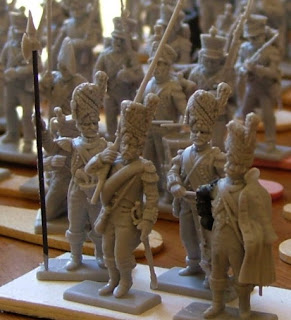 They mix in nicely - the patient responding well to the transplant. 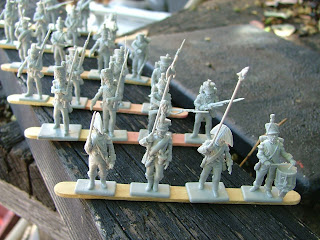 Ready for the first coat of primer.

A note of caution: spray painting is hazardous to your health!  The aerosol agent in most spray cans may be non-CFC, which is a good thing - no nasty holes in the ozone - BUT they have a toluene base, a very nasty chemical that together with the paint, you definitely DON'T want a snoot full of when spraying!  As seen from the pictures I do it outdoors and also sometimes using a spray booth made of a large three-sided box.  Don't do it on a windy day or wear a mask. Actually, you should always wear a mask, just to be safe.

Before you start check your paint - which should be a flat or matt black (or white, depending on your painting school) by testing  it on a bit of plastic sprue.  Some aerosol agents eat plastic giving that nice pitted, rough look to your figures which you will probably want to avoid.  Give the can a good shake to mix the paint pigment up and holding it about 15cm (that's about 12" for you non-metric colonial types) away at a slight angle, give a few 2-3 second bursts.  Avoid long continuous spraying as if you linger for more than a nanosecond in any one spot the paint could pool into the folds on the figure, stuffing up that nice detail you'll want for your painting later on.  I use continuous short bursts aimed at each figure, front then back, pausing to let it dry between about three good applications.  The idea is to build up a nice solid even coverage. 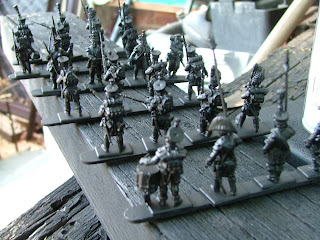 The boys all nicely blacked up, Al Jolson style.

TIP: hold the can upside down when you're finished and spray until clear stuff is coming out the nozzle.  It may seem wasteful but isn't as it stops dried paint from blocking up the nozzle and you will be able to use 100% of the can rather than wasting a heap when the aerosol runs out or the nozzle gets blocked permanently - a worthy consideration if you're using that horrendously expensive Citadel stuff.  Works even better for cans of spray varnish too.