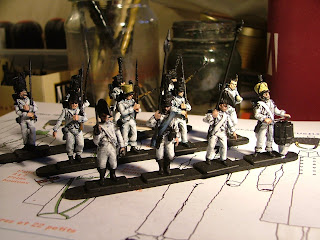 The white uniforms virtually complete, the second stage is the facings, piping, any plumage and the equipment including various bags, sacks and bottles hanging off.  I've finished off the greatcoats by highlighting in my 'Horizon Bleu' over the black wash, which only leaves the white straps to be picked out - I usually save these till last.  The green facings on the drummer and the plumes on the voltigeurs are done in a dark apple green I made up originally for Russian artillery.  This is then 'highlighted' by Citadel 'Goblin Snot' green  - nice name and it gives an even nicer gradation of a bright colour without using a wash.  I use the standard approach of using a darker under-colour with the lighter shade over to give depth - the shako covers are 'Bubonic Brown' undercoat with a watery (i.e. less opaque) 'Bleached Bone' over it.  The only other thing is the black over the black undercoat on the shakos, boots etc. 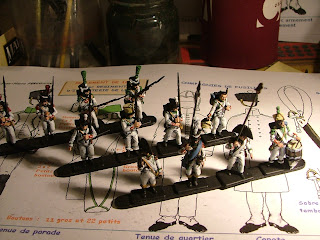 On this occasion I've also done a metalic - although I usually leave them until all the other colours are done.  This is for the shako plates, sword handles etc, and its a base colour - called Tin Bitz it can be a dark/dull bronze and gives a nice lustre as the undercoat to an opaque gold finish which I will then highlight with Coat d'Arms 'Bright Gold'. 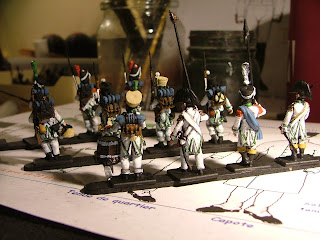 Rear detail - note the green piping on the turnbacks -aaargh! What a rotten job!

One thing I've noticed is that nice raised detail on the Victrix figures makes it easier (or rather it should make it easier) to paint.  Unless of course you are getting older and more doddery, obviously with eyesight failing. That's my excuse for being a clumsy bugger.  I'd knock 'em out at less than half an hour a figure I'd reckon if I didn't spend an hour on each just tidying up splotches and other 'accidental' painting along the way! 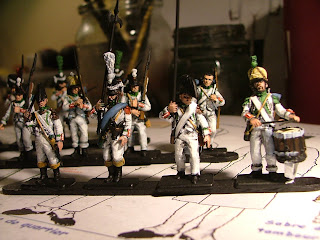 Nonetheless there is progress of sorts.  Some washes on the packs and equipment and touching the black up and some more white on the shako pom poms and the Port Aigle's plume.  Most of the literature I've got gives them red plumes and epaulettes but there was a great deal of  variation historically so I think a nice white one to match the uniform - I'll give him a nice bright green 'Napoleon' pennant on his pole-arm to finish.

Hmmm... still a bit patchy, but starting to come together.  Do all the metals next and then the faces last of all.  Then repeat this formula for the next 12-figure battalion.  No worries!!!  Should be completely blind by then!