After spending an ordinary Christmas which included being stranded with a broken down car, being rained on and frozen in unseasonably cold weather for a day while waiting for a $3 part to fix the bloody car, I was in the mood for an afternoon of genteel wargaming in the Black Powder manner with some reasonably sane fellow adults.  And what a game was had!

The scenario was the Battle of Mills Springs, also known as Logan's Crossroads in which the Confederate Army of East Tennessee under the soused Maj Gen George Crittenden was soundly flogged by the Union 1st Div of the Army of the Ohio under the sober Gen George Thomas.  Being fashionably late, I was duly appointed 'Crittenden' and told that I was drunk and in charge.  I quickly played the part and in character managed to roll both the blunders of the afternoon but with the uncanny luck of a true dipsomaniac managed to hand out an unhistorical flogging to them thar Blue-bellies.  Yeeehaaa!!!!(Hic! Buuuurp!) 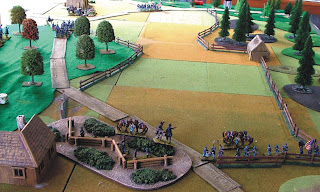 The vital crossroads are behind the wooded area on the right.  The Rebs come on along the other edge of the table, Carroll's Bde (Andrew) in front of the farm house and Zollicoffer's (George and me) along the road.  The weather is dreadful with intermittent pouring rain (diced for each turn).  The Union forces (Cameron and Doug) have thrown their cavalry picket (1st Kentucky - henceforth known as the 'Plucky Kentucky') forward to the first defensible position in order to buy time for the rest of the Union forces to come up. 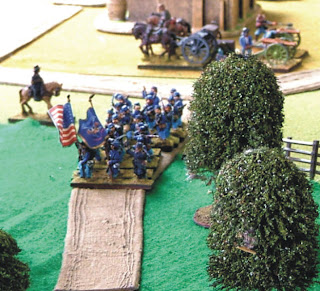 The rest of the brigade is coming on at the other end of the table, with one regiment double-timing it up the road to support the cav picket.  The Union had to dice to see when and in what order their other two brigades come on during the game which proved a problem for them.  All troops are classed as 'green' on both sides save for the 1st Mississippi (Zollicoffer's Bde) and the 16th Alabama (Carroll's) and perhaps the 10th Indiana of Manson's 2nd Bde (Union).  Fortunately for me I rolled a D6 for my inebriated general's characteristics which made him an impetuous drunk, otherwise all commanders were rated 8 with the exception of Thomas (a 9). 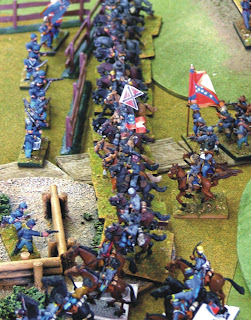 Being impetuous I ordered the cav straight in - charging the Union picket behind the fenceline by riding right up and blasting them with shotguns at pointblank (the only way to use them).  Not only did the green Union cav hold against 2-to-1 odds, they gave as good as they got and inflicted increasingly heavy casualties from the 1st round.  The Union picket managed to hold on for an incredible four moves under repeated attack before being destroyed. 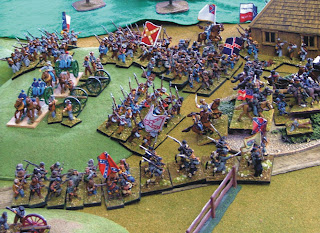 The Union cav picket is finally forced back, unblocking the Reb traffic jam on the road 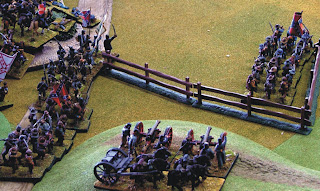 Which in turn allowed the Reb artillery to be brought into action. Note the right hand infantry column - the result of my first 'blunder' which sent them off on an excursion to the woods.
The Union infantry also fought well against overwhelming odds, deploying from the woods on the left in the nick of time and then holding on for three turns in a vicious hand-to-hand.  The advance Union forces bought time for the rest to come on - which proved a problem for Doug and Cameron (even with the latter's uncanny di rolling) as the opportunity their sacrifice afforded was not used to full effect - Doug had to roll to bring his troops on but couldn't match his co-commander Cam's magical di-work!  Historically the Union forces caught the Rebs bunched up charging across the open fields in the centre and slaughtered them.  But not this time round!

The Alabama veterans (on the right) come up against the green Union troops of Mahon's Bde (Cameron) who - at odds of nearly 3-to-1 - hold them off for three turns AND drive the cav off! 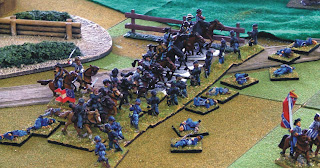 The picket dies but does not surrender! Driven out of the farmhouse and unable to mount their horses and escape, the 'Plucky Kentucky' cav face the final charge (and annihilation) by Carroll's (Andrew's) Tennessee cavalry.
Part two of the Battle of Mills Springs to follow in a sec - ups the guts with guns and smoke!  Chaaaarge!!! (Hic!) 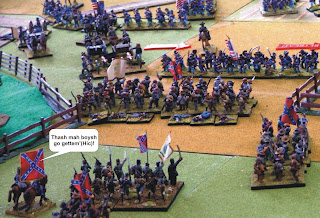