Had to take a break in my blog posting to do some serious PC maintenance - given my browser (and thus Blogger) crashed twice this morning it was urgently required!

So, all fixed touch wood and on with the show...

Once Doug and Cameron's advance guard had been dealt with, it was straight up the middle with everything!  At which point in the proceedings I blundered again.  Took another swig too many from the bottle and fell off my horse - 'Ch-ch-ch (hic) chaaarge!!'  (thud)  But once again the Dice Gods smiled favourably and allowed my blundered unit to charge the nearest enemy (one of the options on the blunder chart) which actually took them exactly where I had intended.  Hooray for the pisspot general!

But the battle in the centre was now reaching its critical moment. 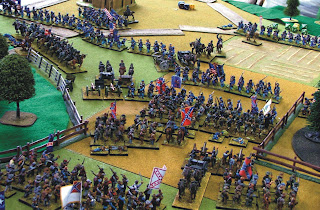 The main assault on the Union centre gets underway - Carroll's cav on the left (minus the dodgy Kentucky marauders) have  burst out of the woods and scared the pants of the green Union troops opposite.  The Alabama veterans have fallen victim to Doug's artillery in the middle and are shortly to be followed by another unit.
The Union artillery, specifically the 2nd Bde's battery was the most effective unit on either side during the game.  It dispatched one of George's cav regiments, then Andrew's Alabama veterans and finally (above) another regiment from the same brigade.  It alone accounted for over half the Rebel losses in the game (that is units removed from the table) before I was able to get my guns on it, destroying one gun and driving the other off.
The only dispute of note was with Andrew's cavalry which had burst out of the woods along that road (i.e. they were in column) and caught Doug's artillery on the move.  I contended that they would have destroyed the battery regardless of what formation the cav were in.  The head of a column would be plenty enough to engage what was a defenseless target.  But I was overruled and Doug somehow turned his carriages around and pulled them out of danger.  The compromise being he couldn't deploy them (and thus fire) in the next move.

I became a sulky drunk general but went along with the consensus: 'Ah do say sah that the gentleman's rules of Black Powder insist upon gentlemanly conduct - let's have a drink to celebrate our decorum!'  'What a grand notion sah, don't mind if'n ah do - bottomsup!'  Besides which, the crucial fight that eventually decided the game was happening in the centre/left of the Union line. 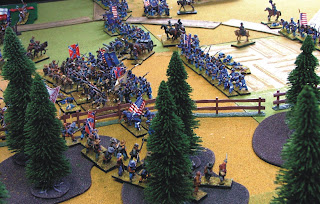 The Union throws out a skirmish line to outflank the Rebel advance but too late to prevent a larger Rebel unit from also deploying in the woods to counter the move.  The remainder of Zollicoffer's Bde repeatedly charges the increasingly shaky Union centre... 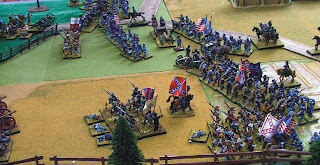 ...which finally starts to give way under repeated assault. 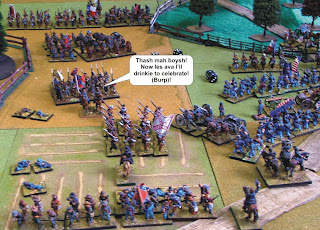 The Union centre/left collapses - an entire brigade blown off the table! Doug's other battery, rescued from Andrew's cav have finally deployed but were unable to come into action before being hit in the flank.
Reb General Crittenden celebrates with another l'il drinky-poo!
The fight on the centre/left went down to the wire with all of (Andrew's) Carroll's Brigade (minus some skirmish units) stalled in mid field after failing orders - twice!  The entire weight of the final assault fell on Zollicoffer's depleted brigade - only three of five regiments left.

The guys very kindly let me 'blood' my VMI regiment and guns in substitute for the Missi, Missisip,  Missip...  them other Rebs - and they excelled!  The guns disordered two regiments, causing one to withdraw and finally put paid to Doug's pesky battery.  The VMI instructors would have been pleased with their students efforts!  The VMI regt. repeatedly attacked, drove off one Union opponent and disordered another before being driven off themselves, only to rally in time to join the final attack.  That's mah boys!

The loss of Doug's brigade on the centre/left caused all his army units to test and as a result the disordered units on his right  which had been under tremendous pressure from Andrew's constant artillery, skirmisher fire and cavalry attacks (shotties at close quarters!) failed their morale and also collapsed.

With the total loss of two of three brigades for the Union, the result was a resounding Confederate victory.
An th' general celebrated by breakin' outa 'nother bottle o' his fahnest sipping whiskey...   YEEEHAH!
Cheers,
Doc
PS: All the scenery and many figures are Doug's with most (many/most? Old Glory) belonging to the redoubtable Andrew.  I supplied the VMI cadets and the two 'Apostle' guns and whiskey sah, plenty o' whiskey! (Hic!)

PPS: My current painting project is finishing my Franco-Prussian War Prussian army while I'm on leave.  Cav & artillery are done - now for a command & 3 or 4 brigades of infantry.  Should be finished by this time next year for sure!  Post on the figures I've done so far next week.
Posted by Doc Smith at 7:50 PM