Must be some sort of record for this blog - can't remember when I lasted posted twice in a day!   Managed to finish my command stand for the Prussian cavalry.  Its meant to represent the command for the 12th Cavalry Bde of the III Corps (7th Kuirassier, 19th Dragoons & 16th Uhlans) under Maj Gen von Bredow.  The standard is an 1870 Prussian cavalry standard (many thanks to Ian Croxall's Warflag site) as I couldn't find a specific one for the 12th Brigade.  I also made them both Kuirassier although pictures I've seen of von Bredow don't have him dressed as one (didn't have a beard either but hey - he was on campaign, OK?)  Bit of artistic license on my part!  To make him a proper general he has all the silver lace and a rakish greatcoat slung over the shoulder.  Took a bit of work with the high speed drill and hair-dryer to bend it into the shape required.  I knew one of those spare ones from the Victrix box would come in handy!  The Standard-bearer's arm came from Perry's ACW figures and the sword pommel from their French Heavy Cav (only fitting really!) 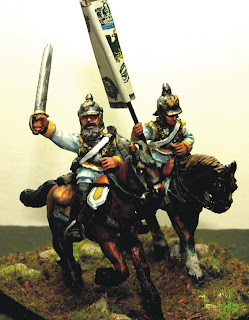 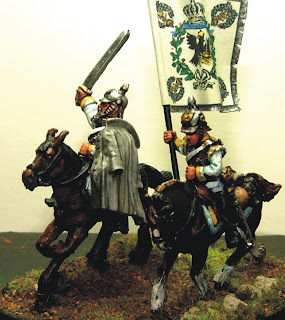 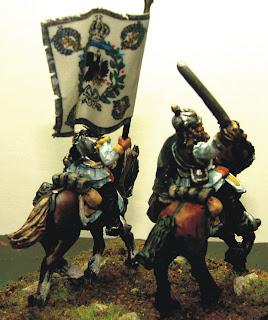 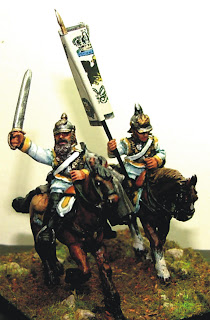 I've modeled my French FPW army on Bazaine's VI Corps under Canrobert.  It was the latter's guns that von Bredow was ordered to silence, leading to the famous Mars-La Tour 'Tottenritt'.  I have a few things to do to finish off the French including putting together a command stand.  I've had the figures for years but never really got around to doing it - umming and ahhing over just how to compose it.  Finishing the Prussian command encouraged me to just get on with it - also finding a suitable MDF wood stand of the right size to put it on.  The scene shows Bazaine in 'conference' (in despair more like) with his senior commanders, all looking a tad perplexed. 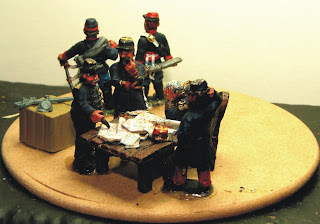 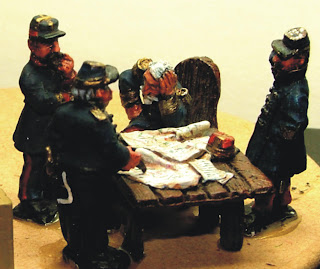 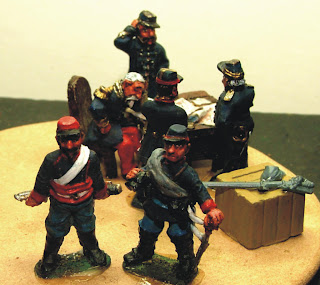 It is a work in progress that I hope to finish before the end of the month and I go back to work.  Got a lot of Prussian infantry to do too and my box of Bolt Action Fallschirmjaeger  have arrived demanding attention to finish my WWII German para company.  [Sigh] so many figures to paint, so little time...
Well, enough of that melodrama - just to even things up a bit, here's one of the Prussian casualty markers I recently finished.  Its a bit unusual in that its an artillery marker as I noticed in BP that there were none to denote hits on guns etc.  I'll be adding numbers to the corners so it can be used to represent up to four casualties on any unit and/or a destroyed gun. 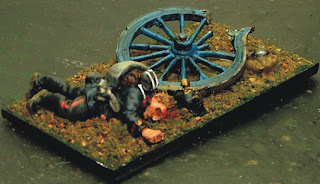 I'll post more when I finish the French command but that's it from me for a week or two as I'll be out of town for a bit.  As before, click on the pix to see the enlargement and please leave any comments or queries about this or any other of my recent postings - which I promise to answer when I return.