Back from my hols in sunnier climes (sand, surf and sun - when the rain wasn't too torrential!) and first off decided to finish the French command base I previewed in my last post.  They are all Foundry figures I've had for years and finally decided to do something with.  The scene is French commanding general Bazaine has a massive headache while his corps commanders argue about where the Prussians are coming from and how the hell they're going to get out of the mess they're in.  Two field officers are observing the battle while the conference goes on behind and a courier has just arrived with what looks like could be more bad news for Bazaine.  Typical FPW French command debacle. 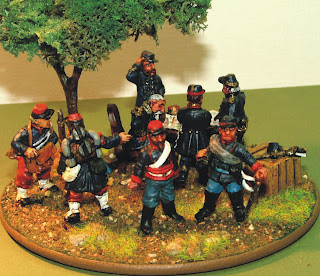 First French officer to 2nd officer (observing the battle in front): 'Are we in a bit of trouble mon ami?'
2nd officer to 1st officer: 'Oui - judging from the noise behind us - we're screwed!' 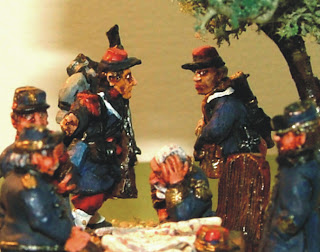 The courier arrives: 'Well - if you REALLY want to give it to him... ' 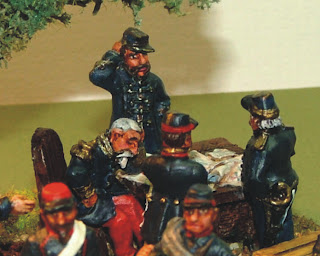 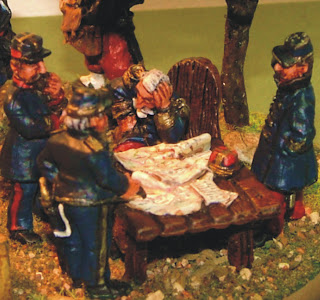 'I know where the Prussians are - it says so right here on this map!' 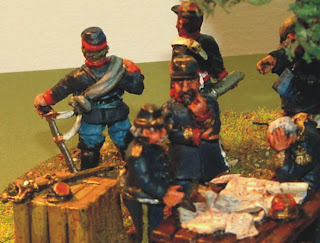 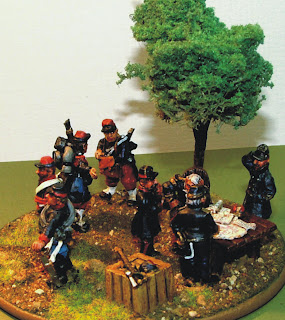 The chair, table and maps were part of the original Foundry set but I added the box with a spare Perry's French officer's sword and kepi.  The flocking on the base was a flocking nightmare being about 35C today and being a clumsy old sod I got the muck everywhere.  At least the tree turned out OK.
I love the FPW period and have also made up a number of casualty markers for the French included one of my artillery ones like I made for the Prussians.  Don't know how if they'll make any difference playing the game but at least like the respective command stands - they'll be good eye-candy for the table - and you can't have too much of that I say!
Cheers,
Doc
Posted by Doc Smith at 11:31 PM