French - Elites and such

Of course the rest of the collection, particularly the French, are an eclectic mix of figures but featuring prominently are Elites. To be honest they're not the greatest figures in the world but as you can see on other blogs (Garage-gamer and Lonely Gamers in links on the right) - they look fantastic in large numbers.  They also had a huge range and were also very affordable - particularly compared say, with Foundry.  Although, as I said, not the most elegant figures, their deep folds, raised detail and overall sculpt make them some of the easiest of Napoleonic figures to paint.  With a moderate effort, you can get great results and in the hands of a master like Leroy Simpson, they are fantastic eye-candy (check out the Lonely Gamers blog to see what I mean).

So, despite the recent advent of hordes of cheap, large (28mm) plastics, I will be holding on to my Elites as they easily hold their own - looking great and mixing in well.

Hey, I wonder if THEY will manufacture my long desired Polish Horse Artillery limber that looks something like... 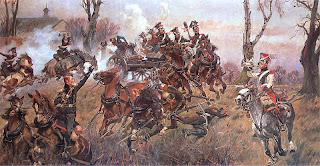 The other thing about Elites is what they lack in refinement, they certainly make up for in animation - there have one of the largest range of pose variants of any figure make, which to my mind puts them ahead of more refined and better sculpted figures like Front Rank when presented en masse. 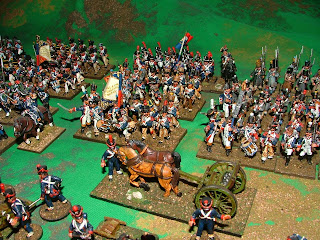 You get a sense of Elites animated sculpting with the French Horse Artillery set.  I think I acquired the limber and guns from Old Glory, adapting one of the artillerymen as a horse holder for the limber. 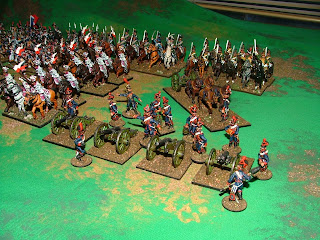 And as can be seen, with a minimum of conversion make up other units like these Berg lancers in their pretty white and amarinth (sounds like you thay it with a lithp) 'dress' uniform. Hmmm - the world's first metrosexual cavalry perhaps? 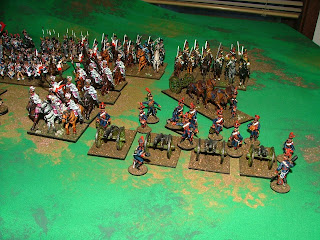 The following is my 15th Legere, again mainly Elites but with a number of other makes thrown in including one or two ancient Hinchcliff and Connoisseur (?) or possibly Essex  figures (I scrounged figures from everywhere and anywhere when starting) making up the command stand. You can see what I mean about mixing in well with other makes as a regiment (done up as 30th Ligne) of Front Rank can be seen immediately behind.  Front Rank battalion packs are very handy - regiment in a bag! 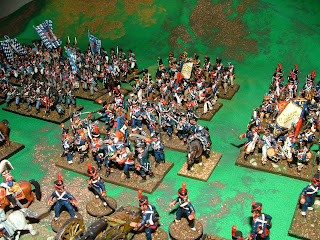 And last but not least is the man himself: Boney next to his 'daughters', accompanied by one of Soult's ADCs.  The guns are Old Glory and the artillerymen possibly Essex with a few Foundry thrown in.  The guns are too big with the figures - really could have done with some Elites but I've another battery of  Elites yet to paint up 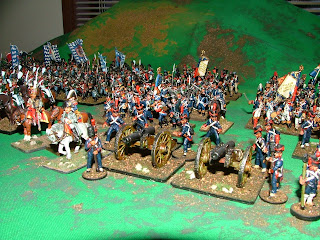 Another shot, this time of the Dragoons brigaded with the Chasseurs a Cheval (Marbot's boys!) Again, not sure of the make, could be Connoisseur or early Essex - dunno - with an Elite command.  Ya makes do with wot ya got right? 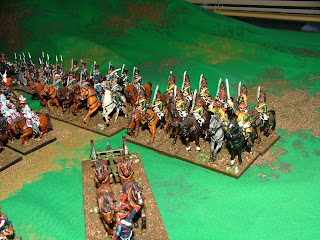 Finally, I was keen to see how the Perrys fitted in with the rest.  Not too shabby at all as it turns out.  Hope its the same for the Victrix, but that's one of my next painting projects over Christmas! 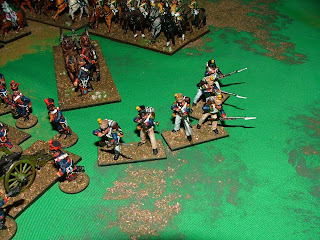