Couldn't resist it - had to post more of the Perrys!


Just finished one of the command stands for the Chasseurs D'Elbe using the metal battalion command figures and a casualty to make a four figure command diorama. 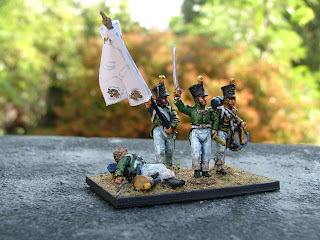 The idea is that I can field three 12 figure battalions, one deployed as skirmishers, each with a command stand.  One command is supplied with the box of figures and the other two have been made from the regimental/battalion command metal sets available. 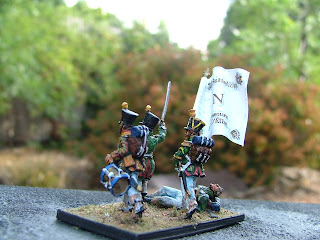 The idea for the commands is to have battalion flags - white for the 1st and red for the 2nd - based on Guard Bttn flags of the time. The flags are put together in a graphics program and then printed on 300gsm bond.  A little paint and pen work then PVA glue covering one half of the folded flag which is then attached to the pole and, while still damp, given a few bends to get that waving in the breeze look.  When dry the whole thing gets a few coats of matt varnish and viola! - your command with flag is done! 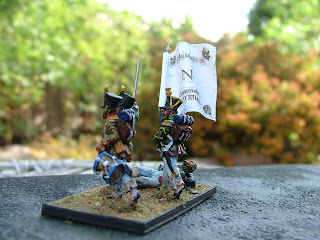 Note too the base is a little deeper than the standard - 30mm rather than 20mm - to accommodate the diorama and use the animation of the figures in an interesting combination - it was only only way to fit the wounded guy on too! 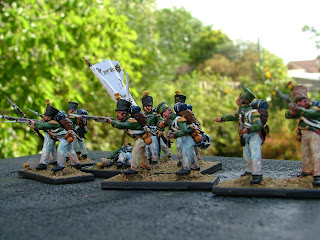 The command matches with either the other skirmish stands or with the marching figures. 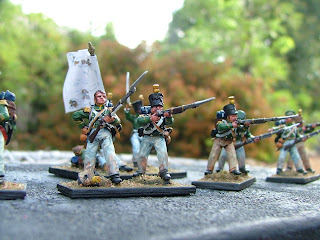