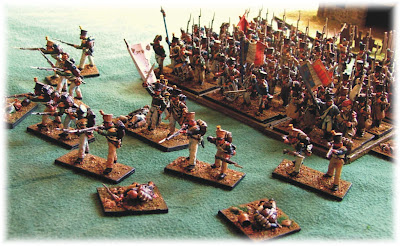 Think of it as the elevator music of wargaming - a selection of shots of all the Perry's I've finished thus far while I extractus digitus and try and get my Victrix Italian brigade finished (looking an increasingly dodgy prospect with uni work looming). 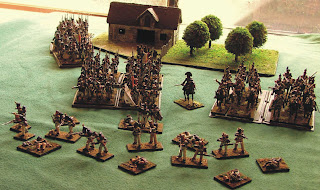 This lot represents two boxes of French infantry, leavened with one casualty set (x 6 metal figures) and one regiment command (greatcoats) set plus a mounted general from that three-figure set and a box of French Heavies - 96 foot and 17 mounted figures in total.  The plan was to have dedicated skirmish stands - enough to represent at least a full battalion in skirmish order - to go with the seven battalions in column or line in three separate regiments.  And a sprinkling of casualty markers.  I've noticed with the Black Powder rules you need quite a few of these! 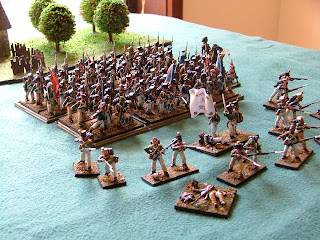 Massed attack columns with skirmishers deployed in front to cover
Note the command stand in the skirmish screen.  This is to act as the support from the skirmisher 'cloud' as well as local command; if threatened by another larger formation or cavalry, the skirmishers are able to evade and rally to their support, forming column or line and thus avoid being ridden down etc, (at least that's how it should work!) 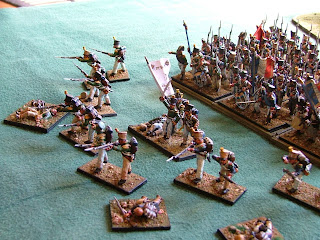 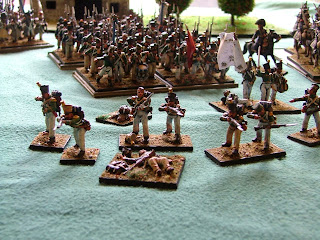 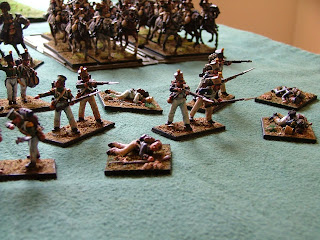 The casualty markers - if one unit had this many in Black Powder it would be in some serious trouble!

Note also that all the unit formations save the skirmishers and casualty markers are on magnetic movement trays.  They seem to work well - all passing the 'upside-down' test (without shaking!!) - even the metal figure command stands adhere well. 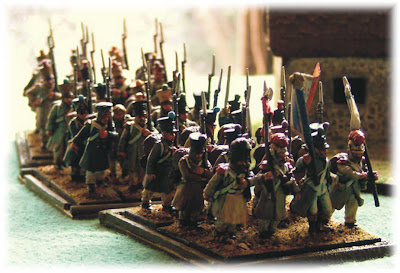 The 55th in column - marching to support the brigade's attack or about to make a foraging detour to the orchard? 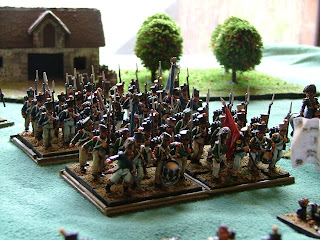 French brigade in column of attack 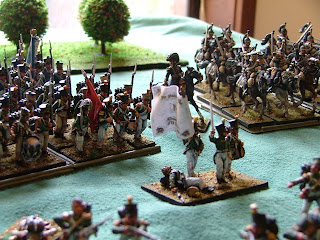 With the General d'Brigade urging the lads forward!

Under fire!
Well, that's the Perry's thus far - still to do my Carabinier heavies and awaiting my Dragoons.  I'll look forward to testing out Black Powder on the Napoleonic period - if and when I can organise it, I'll post a battle report.
Cheers,
Doc
Posted by Doc Smith at 1:35 PM