After seeing John's efforts and the discussion on other posts about basing using the Litko magnetic basing I decided I would have a go at it myself.  A mate of mine had a number of these metallic based trays which the magnetic strip on the bottom of many commercial basing used on figures will adhere to.

They were suitable for a 60 x 60mm base which is the size of the bases for a 12 figure battalion of 25mm figures - usually a 60 x 20 base for the command of 4 figures and combination's making up the rest.  The bases are expensive  (given the number you may need), only came in that configuration and were hard to get here.

After I got a kids magnet set  I stripped the metal sheet out of it and cut it to size on my trusty benchtop bandsaw.  The idea was to make enough to field a 4-5,000 point army or maybe even two.  I reckon I needed 40 of the battalion sized bases - enough for 480 figures - that should cover it! 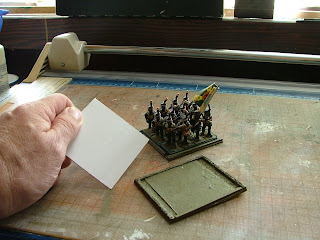 I cut the metallic sheet to 60 x 60 and the thin card base to 70 x 70 and glued match or balsa sticks to form a lip to the base.  I then gave it a decent coat of olive drab for a uniform finish.  The matchstick edges of some older ones I made out of balsa were flocked in a fine railroad modeller's ballast - which you could do for these but I couldn't be bothered with so many to make.  As you can see in the above photo, a battalion size unit of 12 fits snugly on the base (Russian Jaeger - Front Rank 28mm figs).  I was so pleased with the results, I decided to make a few more up - this time for a cavalry regiment. 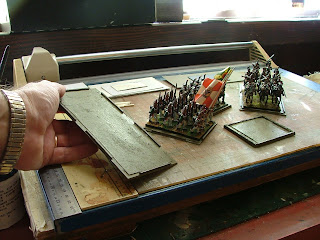 I also realised that larger units such as Austrians or Russian Guard would require larger bases so I also made a few to accommodate 16 figure battalions.  I made some up and tried the Pavlovs (again Front Rank) for size.  The next size up was the half regiment size for cavalry.  The biggest cav base is 60 x 40 which takes three horses abreast and are usually the command stand and thus head of a column formation. 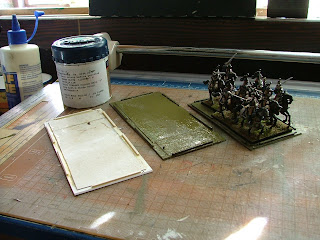 A cav regt in column is thus 160mm x 60mm - add another 10mm for the card.  The half regt ones I made are 120mm long and can accommodate up to 9 mounted figures


Also of interest is the paint - I got a quarter litre (250ml) sample pot made up of Dulux acrylic for about $5.  Given you will pay close to that for a 30ml pot of paint I thought it a bargain - and you can get every colur under the sun made to measure with the mixing system.  Hmmm - it appears to be pretty opaque and nice smooth consistency - I wonder if it would make decent figure paint?  Anyone out in blogland tried it?  Maybe a solution for some of your more frequently used colours? 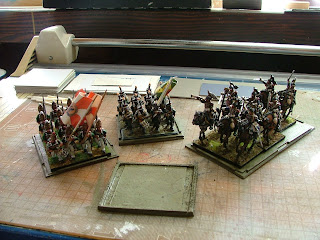 Inspired by other postings and comments on other blogs I embarked on something a bit more ambitious than first envisaged but another days work and I'll have enough bases for 40 infantry battalions and 10 cav regiments as well as a dozen or so for larger sized infantry formations/half cav regiments.  Nearly all my French and Allied and most of my Russians are now catered for but then I checked the basing on all my Austrians.  Most of that army, being the first I collected, are not based with magnetic bases.  Oh boy, a BIG re-basing job or at least maggy strip job is needed.  I tried the magnetic tape solution but metal figures are too heavy and it doesn't have the adhesion that matches the adhesive backed sheets of the stuff.  Ggrrrr - more bleedin' fiddling about required!
Still the French cav look nice and at home on their movement tray base, so after that brief but franticly productive interlude, back to finishing the cuirassiers!
Cheers,
Doc 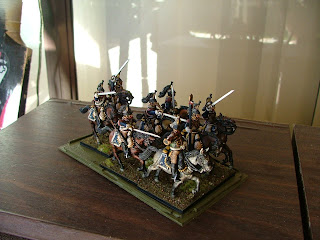