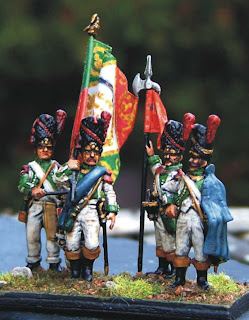 These were the 'extra' figures out of the box of Victrix, which together with the kneeling figures I'm making into separate stands. Those kneeling are made into skirmishers - no surprises there - but the other were additional (or rather superfluous) command figures.  With the plethora of bits that come in the box, I was able to turn them into a command stand.  If I add the eight other grenadiers from the four battalions I have I get an extra Grenadier Battalion.  The eight skirmishers make up the deficit if I choose - so either way I get five battalions out of one box!  That's better than a brigade - best value on the market in my opinion. 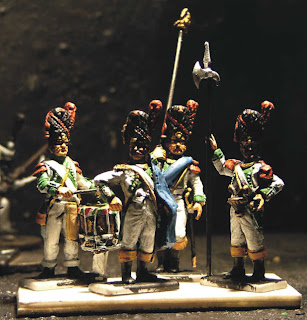 After I finished the painting I decided to apply the Army Painter tone.  Apart from the flesh and a general weak black wash - which was then highlighted in the base colour - I did not do the usual layers of washes to build up the tone.  So the first shot is the figures painted but 'in the raw' as it were, before basing and flags to finish.  I was particularly interested to see how the white uniforms would turn out as I had abandoned my earlier method with these figures.

The next is of the finished figures, with the toner and after a matt varnish has been applied.  The variation on the white uniforms is almost entirely the addition of the Painter tone.  Looks OK to me and saves time - I'll be using this method again for the remaining two battalions of Italians. 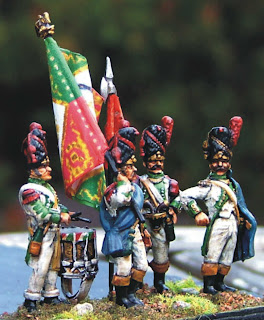 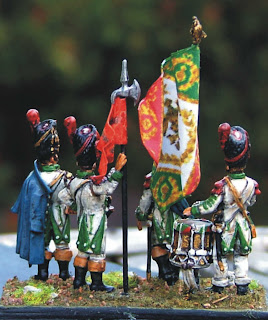 All told it took about an hour and a half per figure to paint - about average for normal figures but about half an hour less for command ones, which I usually lavish more time and detail on.  It took about an hour to do the flag and Eagle Guard's pennant then another hour and a bit to trim down the plastic stands on the figures then base and flock and final varnish. I reckon the Army Painter probably saved me at least an hour - the only drawback being you have to leave it overnight (minimum of 12 hours) to dry and set before you varnish.

I must admit to enjoying doing small dioramas like these, far more enjoyable than painting figures en masse - which is what I now must away to do to get a regiment of Union Perry figures painted and based for a Black Powder game tomorrow evening.

I tell you - the work never stops!