I have tried on several occasions to post this pilgrim's progress since the start of the year but something always seems to get in the way, the latest being a prolonged serious illness and then the bloody Wuhan Flu in the house! At least the required quarantine has been fruitful as I've just managed to finish a mate's impressive Empress 88 gun and crew done up as Condor Legion (so Luftwaffe Flakartillerie). The gun is just base-coated in Tamiya's German Grey with a black wash on the wheels etc, The brown Luftwaffe Flakartillerie uniform is correct for the Legion in Spain where the anti-aircraft guns like the 88 came under Luftwaffe control. The Unteroffizier is wearing a standard issue Luftwaffe Feldmutze and I given him a knock-off white 'Fliegerblusse' that Luftwaffe officers and NCOs liked the wear (with appropriate red tabs etc, for the artillery arm). the usual Legion uniform was brown - even the helmets but a coat of Feldgrau and they're all early war Germans again. Wonderful model but very fiddly to put together (as only the best ones can be!) 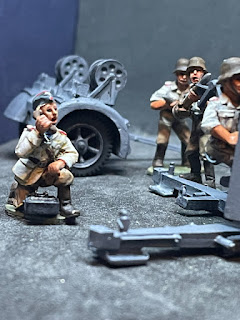 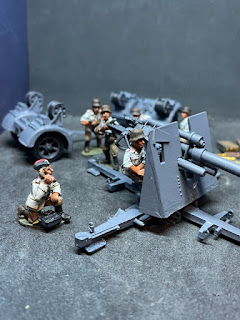 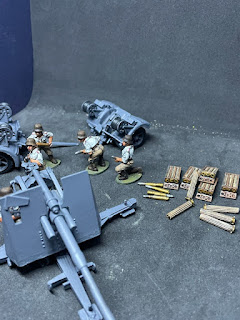 As you can see, as well as the detachable wheels the set comes with a host of ammo boxes and shells and can be set up on wheels (the 88 could still be fired that way) or on its large cruxiform stand in any position. But my best achievement (I think) so far this year has been the final completion of my Imperial Indian force. Thanks to the generosity of another friend I obtained a horde of unwanted figures including the wonderful Artisan and Copplestone NWF Indians, both Sikh and Muslim troops to add to those I already have and the units of Woodbines plus the beautiful Empress Indian Mountain gun set.

The collection also now includes two units of the famous Hodson's Horse - just missing one mounted officer! - and one unit of Frontier Rifles (which can double as dismounted Indian cavalry). Also prominent are three units of Ghurkas - two Woodbine (with HMG) and one Artisan (excellent figures) - plus four Woodbine units of two each of Muslim and Sikhs each with an additional Hotchkis HMG. 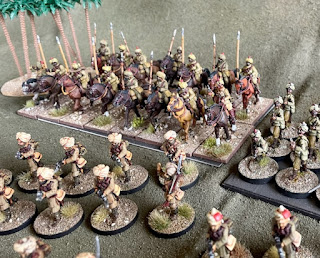 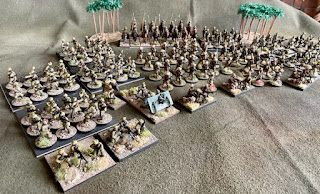 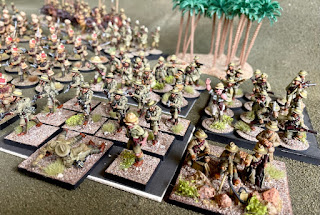 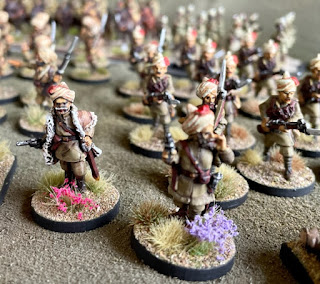 A few more shots of the Mountain Gun (with mule ammo carrier!) and my Hodson's Horse officer. 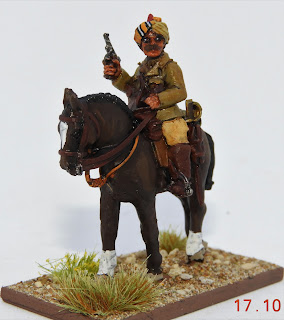 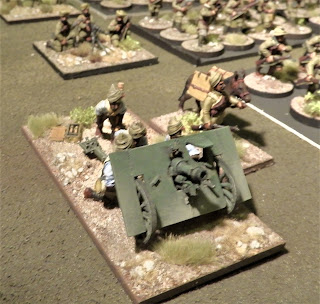 Prior to my Indian army units I was finishing my WWI French army (as seen in my last post) with a colonial unit after acquiring a box of the Atlantic plastic figures which come loaded with options - and Senegalese heads! They required quite a bit of scalpel work to properly fit arms etc, and avoid odd poses but the advantage is a wide variety of figures in quite animated poses, and being plastic ideal for the odd conversion such as my bugler! Generally matching the CoC list for a late war French infantry platoon (very VB heavy!) that could also do for early WWII - European or Middle East/Levant theatre. They paint up well and I'm not unhappy with the final result. 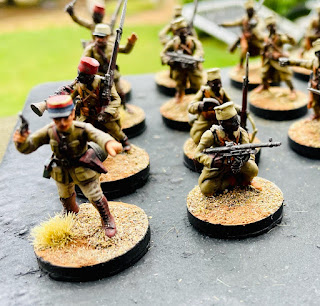 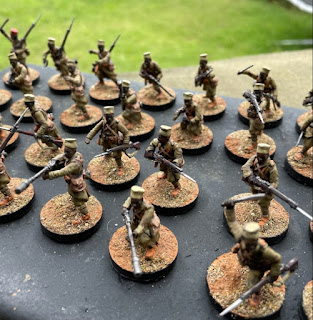 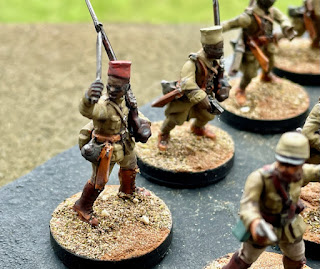 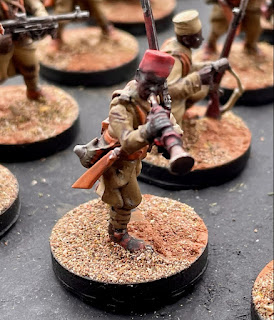 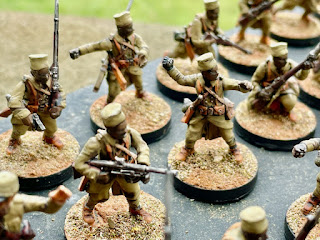 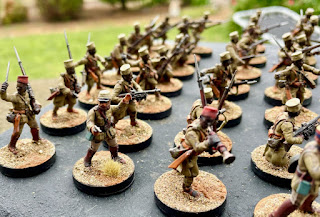 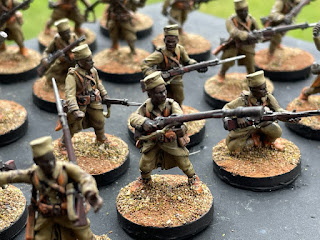 There have been plenty of others too with some recent Perry's FPW Jaeger but more on them in a future post when I get more done - plus I'm holding out for their promised FPW French infantry release which should be any time now (hint, hint Alan and Michael! ;-)

Jumped the gun a bit publishing this as I completely forgot all the Vichy French units - and armour - that I'd also finished. The French armour includes some very interesting pieces from Mad Bob Miniatures in the UK such as the Panhard 165/175 Armoured Car and a couple of Panhard 179 APCs (amongst the world's first armoured troop carriers). The latter had two crew (one who acted as a gunner if it carried a Chauchat or Hotchkiss LMG) carrying 6-8 men and will form a mobile recce unit for my Vichy French.

Next cab off the rank so to speak is the Renault R35 light tank from Rubicon which is a highly detailed plastic kit - I couldn't believe how small it is! Nonetheless it was well armoured and considered one of the best light tanks in the world at the time - the Allies in the Levant had nothing to counter it! The tank comes with both the long and short barrel 37mm gun turret. There were over 90 of these in the Vichy Arme L'Orient most operated by the famous Chasseurs D' Afrique regiments.

Apart from the AVs I also completed several units of figures to complete my Vichy force in the Levant and Syria including one of the more exotic cavalry the French had (several thousands of them in fact, both as mounted and mobile infantry mounted in trucks!) - this lot done up as French Moroccan Spahis - but could also easily be Circassians etc. and which I have as both mounted and dismounted.  The figures are Askari Miniatures from the US who have one of the largest ranges of various colonial types, FFL and so on available.  The quality mightn't be up there with the Perry's etc, but you can't quibble with the variety - many unique - very reasonable prices and for me anyway, the great service (and for those of you who have suffered at the hands of the US Postal Service you know how important that can be!) 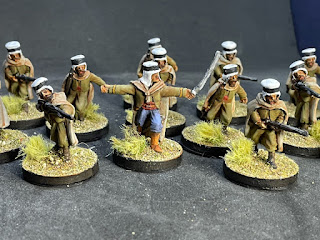 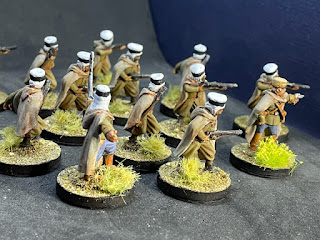 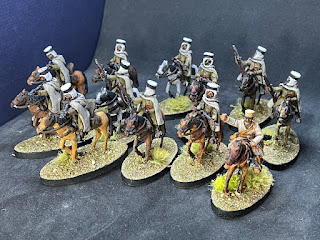 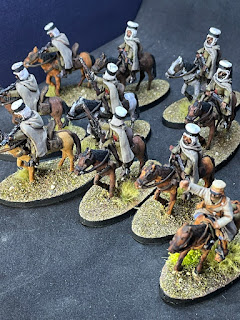 In addition to the above were more of the pile of lead given me by my very generous mate Peter. They were the first of those figures I painted and are a full unit of French Foreign Legion in Vichy service so in all-French kit. I substituted a French SMG from the Atlantic WWI French set for the bearded FFL NCO figure - all the figures are Artizan with one unique one-eyed, one-armed Pulp French officer. A great character figure whose name escapes me but based on a real-life French war hero. 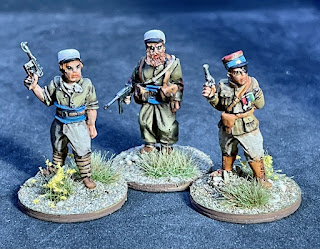 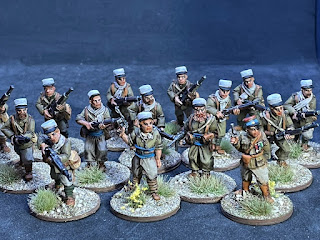 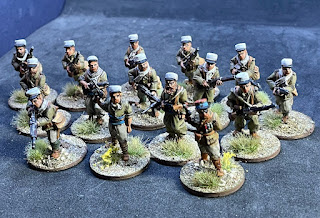 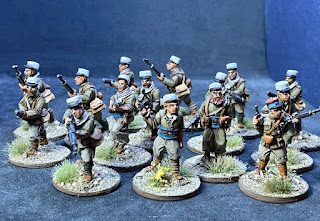 With the addition of the FFL my Vichy force is about complete save for a truck or two, which I'm still trying to source. So quite an extensive update but then again its been a loooong time between posts so I have some making up to do. Hopefully the next will not be so long in the making and will include some of the FPW figures I've been doing for a skirmish style game. Ou revoir for now and may the dice gods be with you!