Its been quite a while since the last (post Christmas New Years) post. In between have been a few health issues and a decent bout of the dreaded Covid. Fortunately didn't hack up more than one lung and have eventually made a full recovery (I think) anyway the worst aspect of the Wuhan Flu was feeling too crook to even sit at the work table to paint! 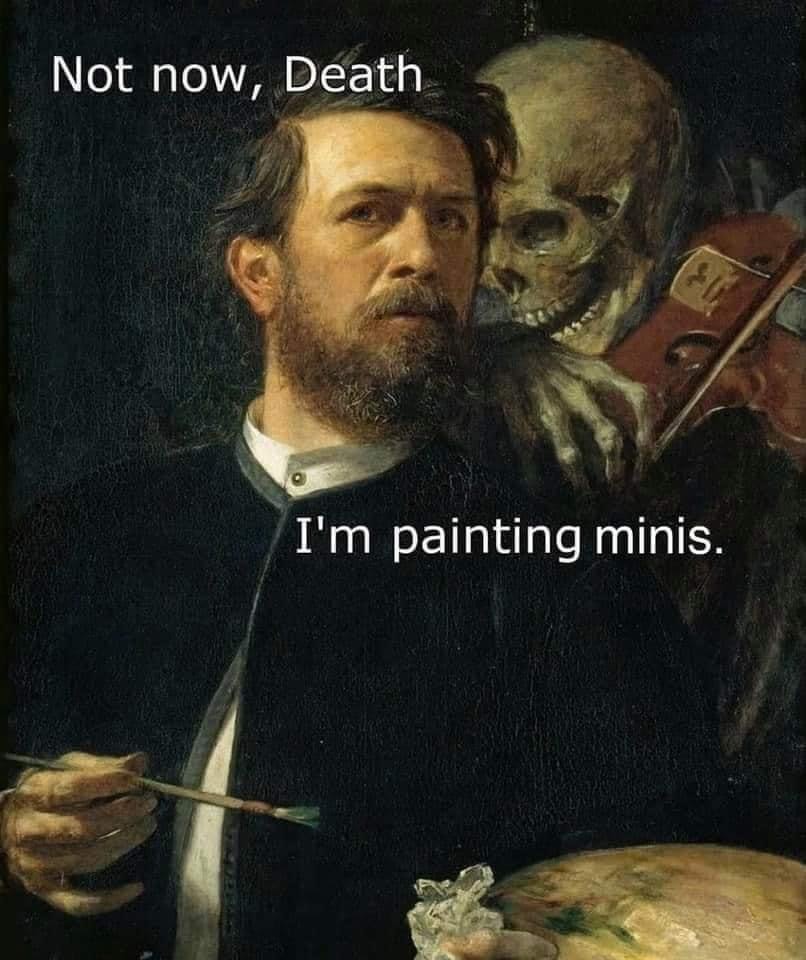 Nonetheless in the intervening time I've managed to paint up a storm, well heavy downpour anyway!  With lengthy breaks in between. I have to admit motivation was somewhat lacking on occasion. First lot would be familiar to those who follow me on Farcebook - the final completion of my second ALH Ford armed scout vehicle and crew. From the delectable Empress (with the usual great service from Nathan of Elite Miniatures in Townsville) this was a fiddly affair to put together with superglue but the end result is just superb, and a joy to paint up. 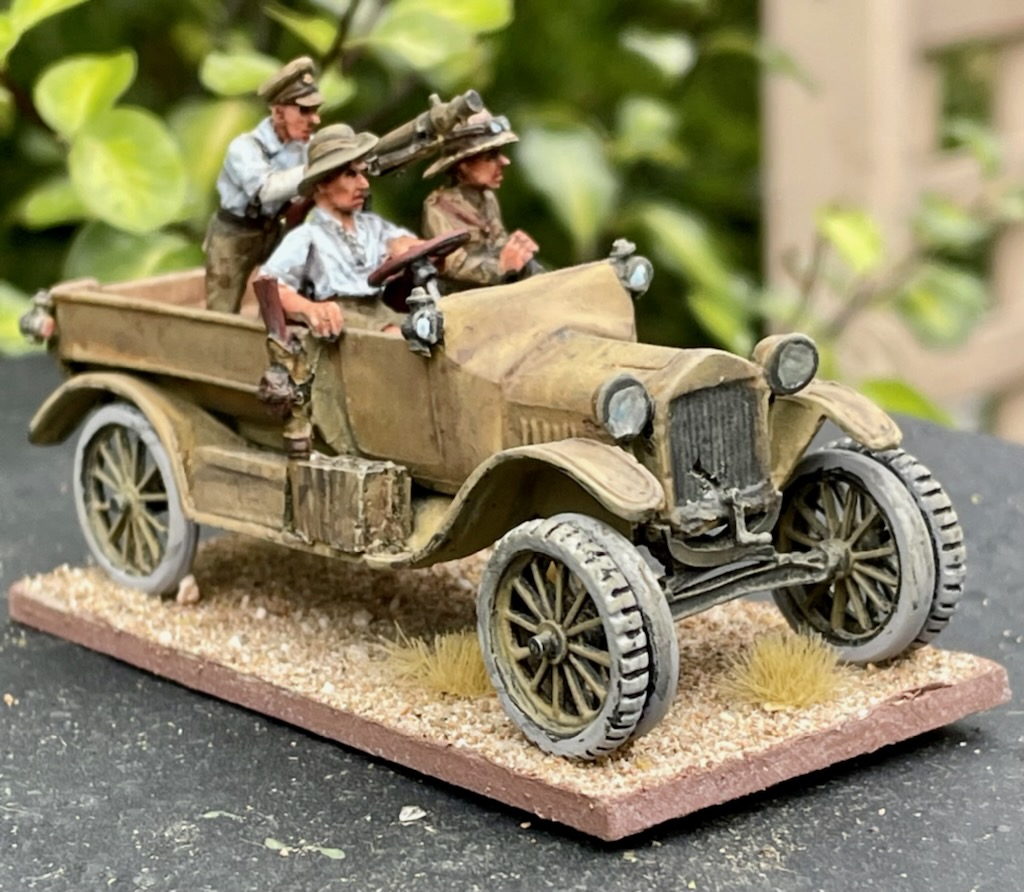 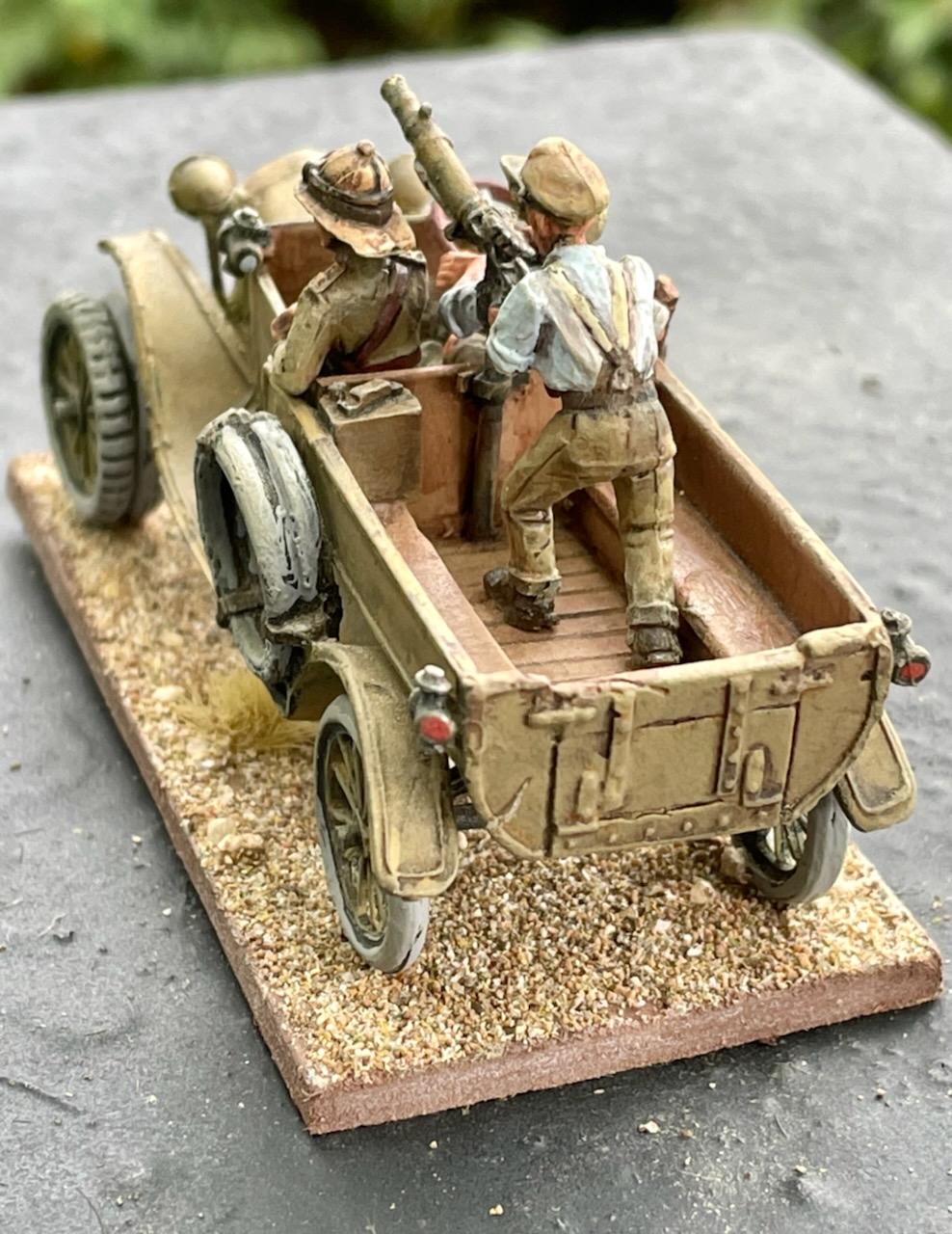 I debated on the basing but decided in the end to keep it simple as it didn't have the de-mountable HMG required of the first one. Am tempted to get a third one (Empress seem to have three car/crew variations available) but I also have the smaller Company B version already so its not a pressing issue.
Next lot after this was finishing off my early WW1 Belgian Guides d'Cheval - the Belgian's colourful elite lance and carbine armed mounted scouting squadrons in their anachronistic
Napoleonic-style Chasseur a Cheval uniforms. These are the rather nice UK Brigade figures which surprisingly (for a mostly fantasy figure company) do a rather good range of early WW1 Belgians. 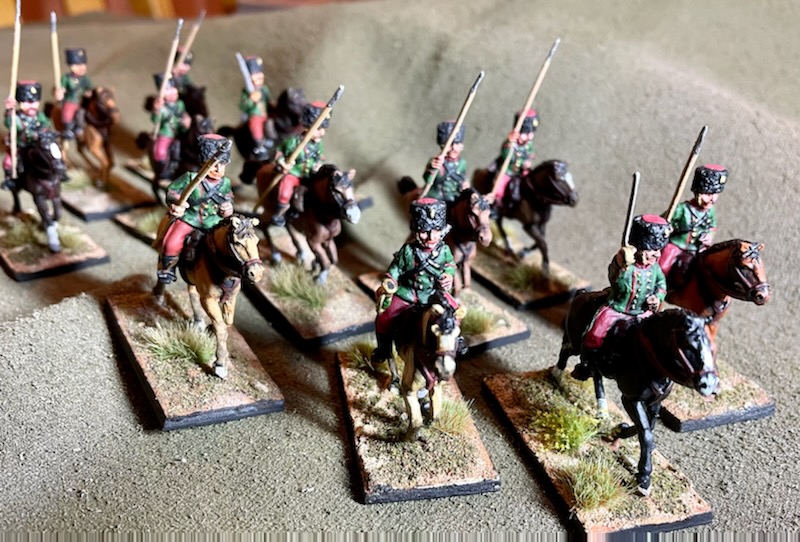 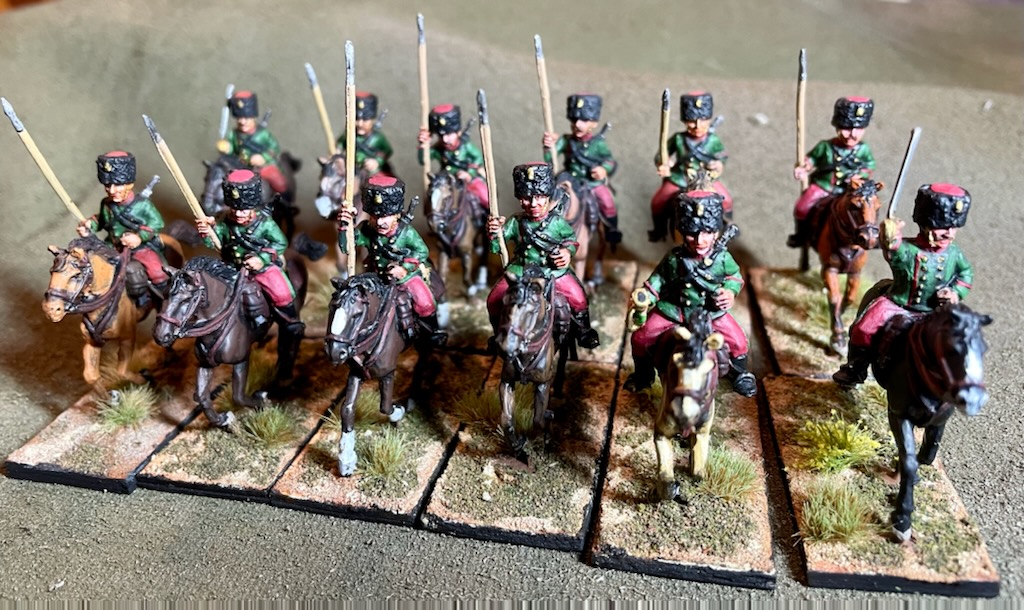 In addition I did some basing and touch-up work on my kit-bashed Belgian Field Artillery and limber. This is an early French 75 with seats on the gunshield for limbered mode. Two rode on the limber, two on the gun - imagine what bone-shaking fun that would have been! Again this is all early 1914 -15 as the uniforms etc, had all been changed over to Belgian khaki by mid 1915. 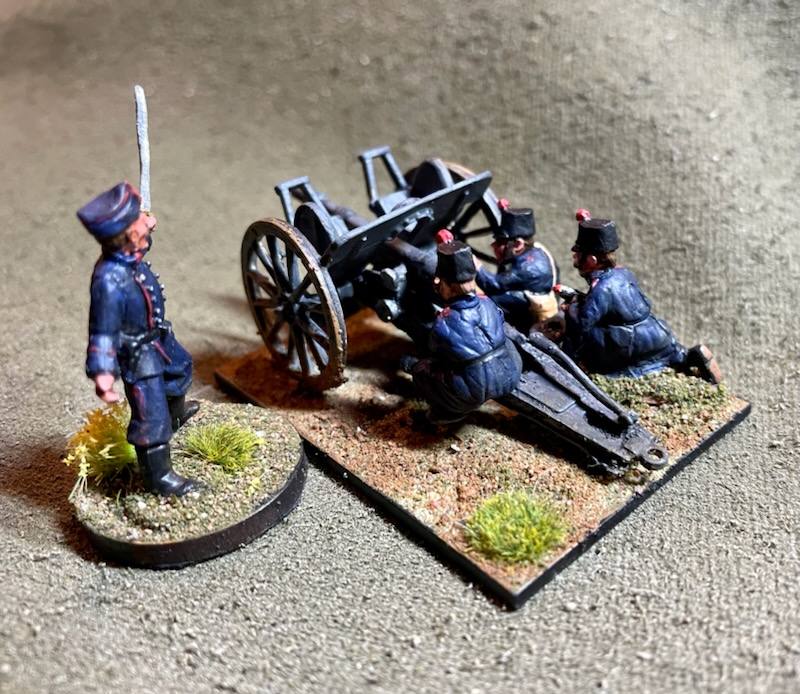 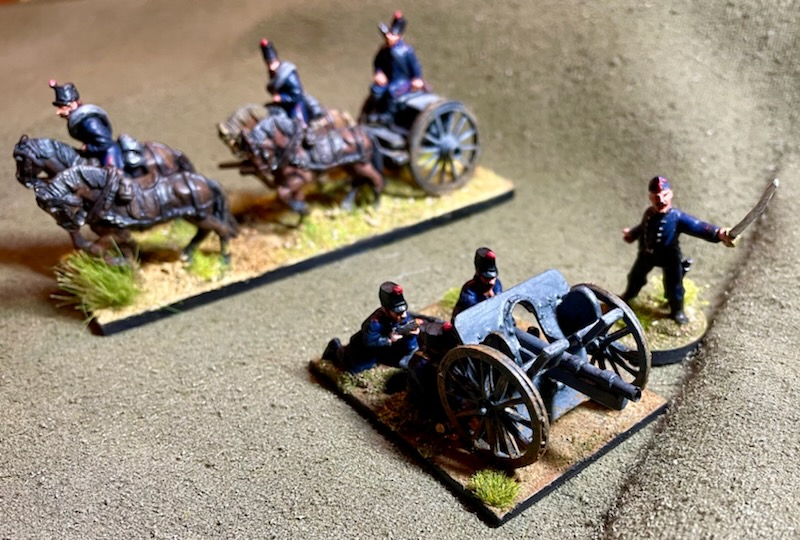 This completes the early war Belgians, a unique little army to go with the same in British and German. The French are still a work in progress with colonial troops done but (1914-5) line still required (with supports!) Cavalry have been obtained and are next to do up. Also in contemplation are Russians and Austrians but apart from a few recently acquired Northstar(?) Russians (and supports) they are still some way off. My late war French were posted last time and to go with them now is some air cover in the form of a Niewport in the colours of French ace Roland Garros 'The Sentinel of Verdun' who survived the war. Interesting factoid: the surviving veteran French airmen were forbidden to fly in or rather over the victory parade along the Champs Du Elysee (they were expected to march apparently). Garros was so enraged by this overcautious and rather nonsensical order that he defied the ban and flew not only down the parade route at roof height but then actually through the famous victory arch. Although the Niewport is a very small plane it was still a remarkably dangerous feat that he actually appears to have gotten away with. One can imagine the onlookers astonishment - who cheered him madly of course. Well he was a famous national hero - one of the few who'd survived - so I suppose they were hardly going to lock him up for it. I'm sure he was grounded for it though!  ;-) 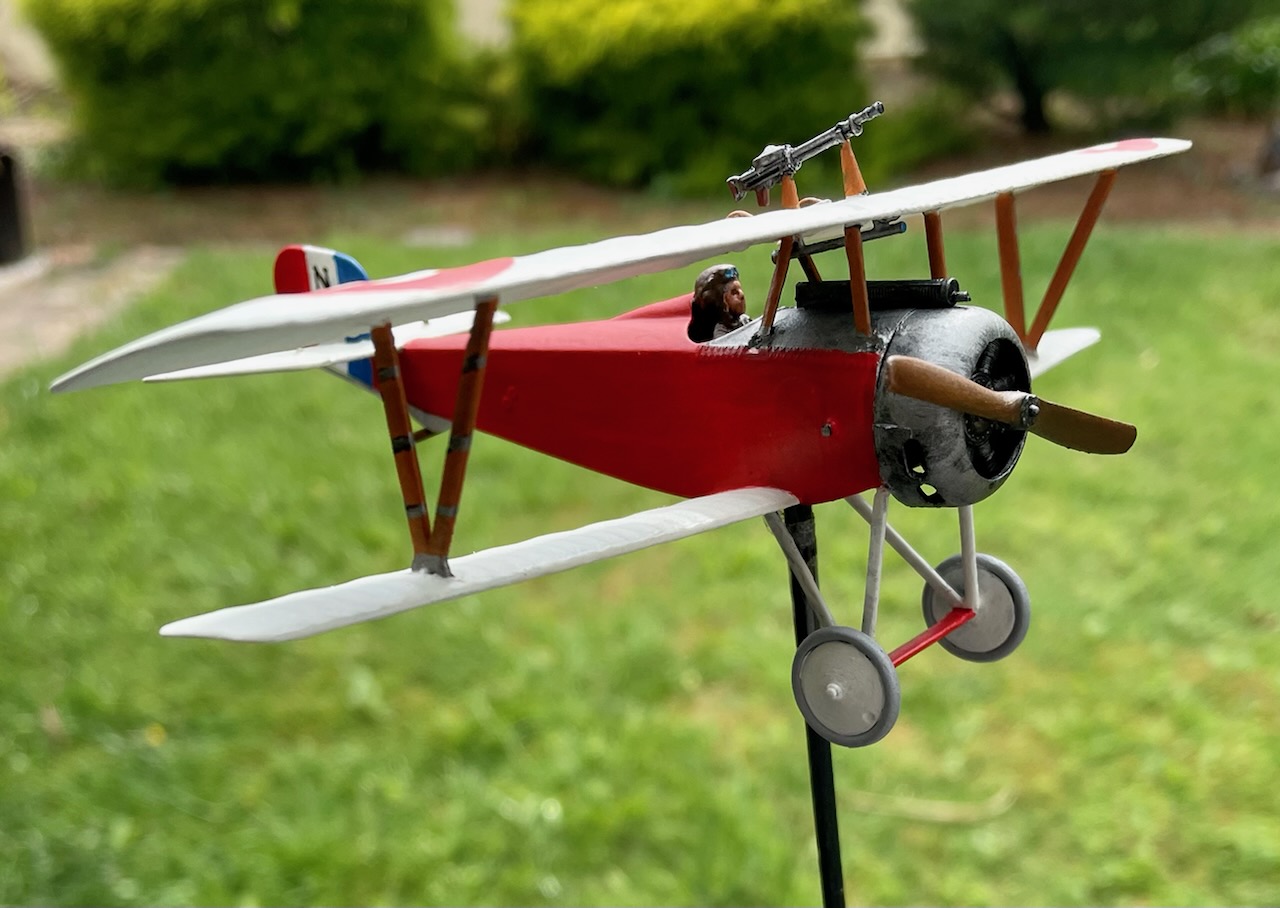 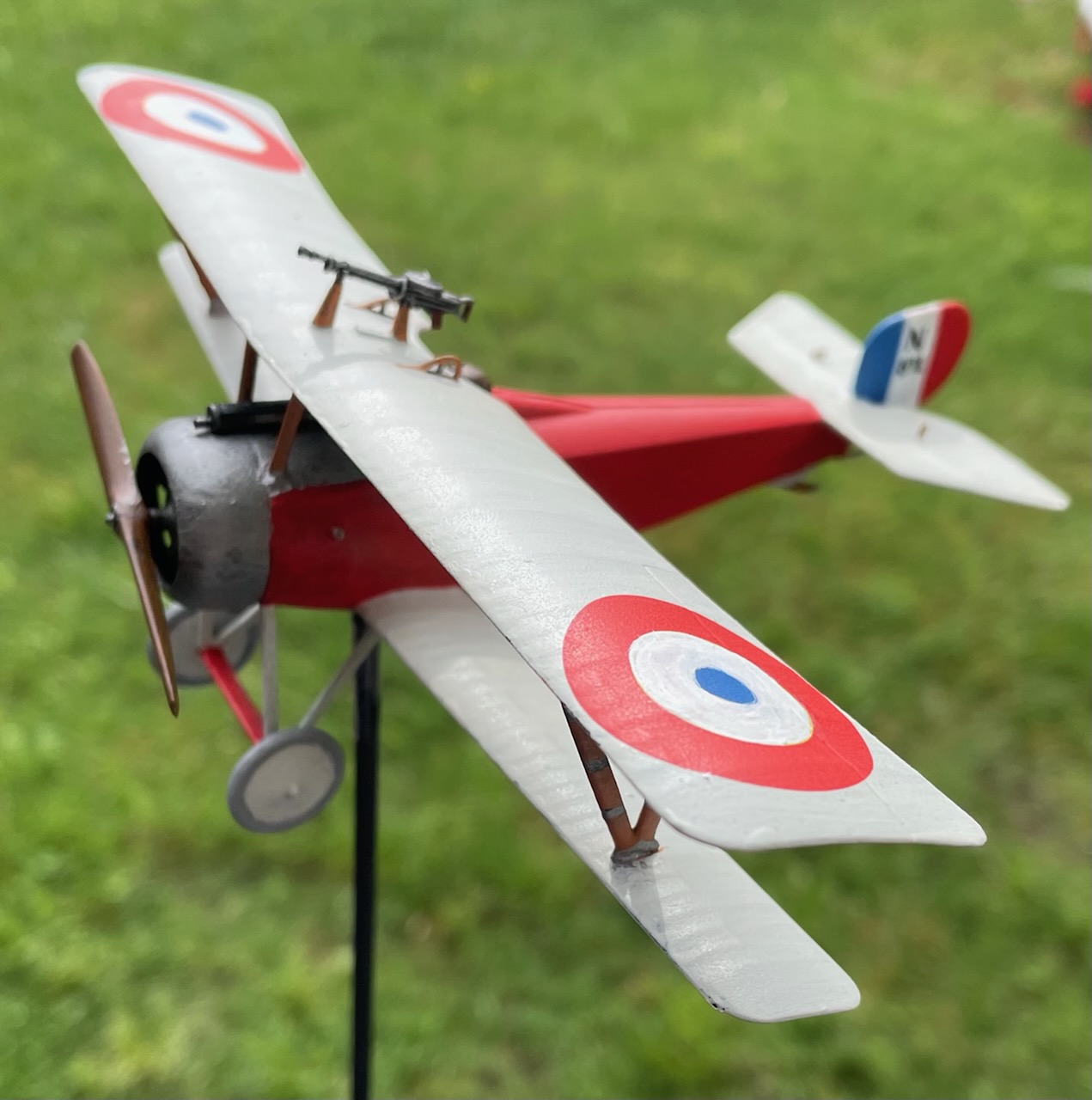 The next lot are a bit of a departure from the modern-ish era. They are a unit of Medieval mounted Arab crossbow - I think the Saracens ( or Spanish Muslim light cavalry) copied the Europeans who had mounted a few Turkopoles as well as their own (French maybe?) Anyway they're nice-looking figures (although some of the horses I've found for them look a bit dodgy) and will fit in well with my Muslim mounted which now number well over 40! Wait... what?? How the hell did that happen? I wasn't even aware when I'd collected most of them! Oh dear. More figures. Shhh... don't tell the Memsahib! 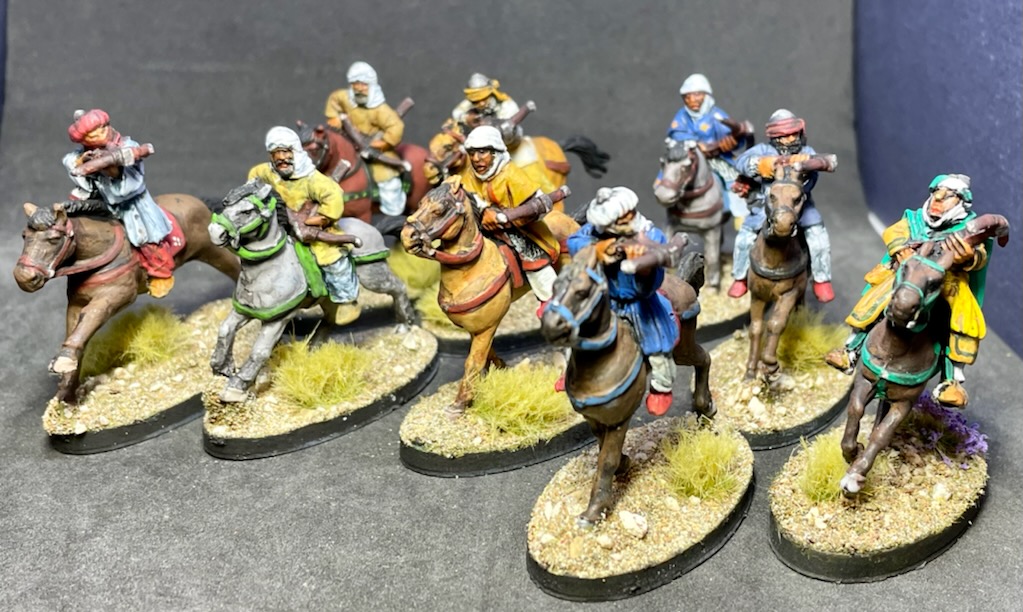 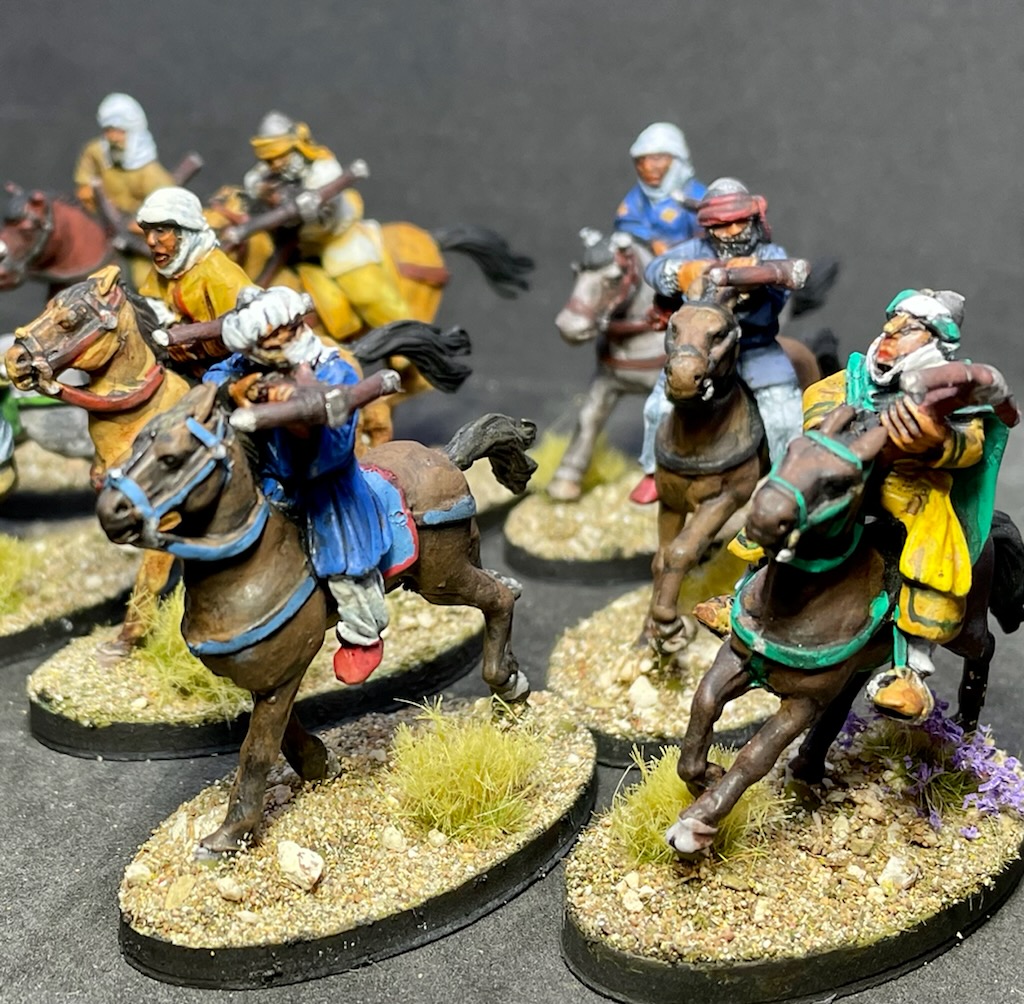 Very colourful and I'd imagine quite deadly from the saddle - at a gallop too I shouldn't wonder! Possibly Artizan or old Gripping Beast figures - I've really no idea.
The last lot I have painted is another commission for my mate Doug who has collected a Napoleonic Saxon army from the wonderful Calpe Miniatures. I seized the opportunity to return albeit briefly to my Napoleonic wargame roots. It's been a while and while my eyesight and steady hand aren't what they once were I decided to give these a decent bash. They are Saxon Prinz Clemens Chevaux Legier and superb figures - so how could I not? 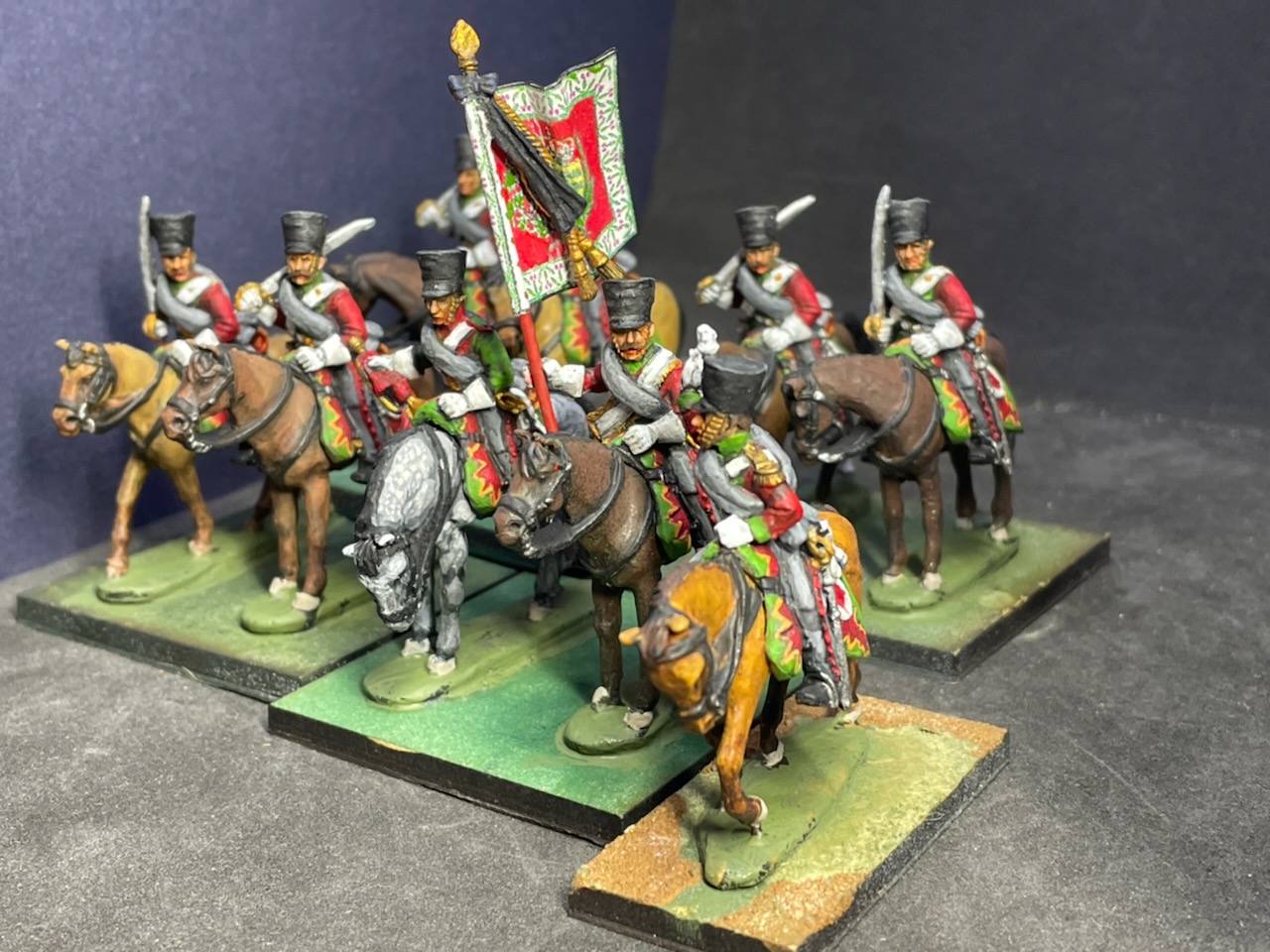 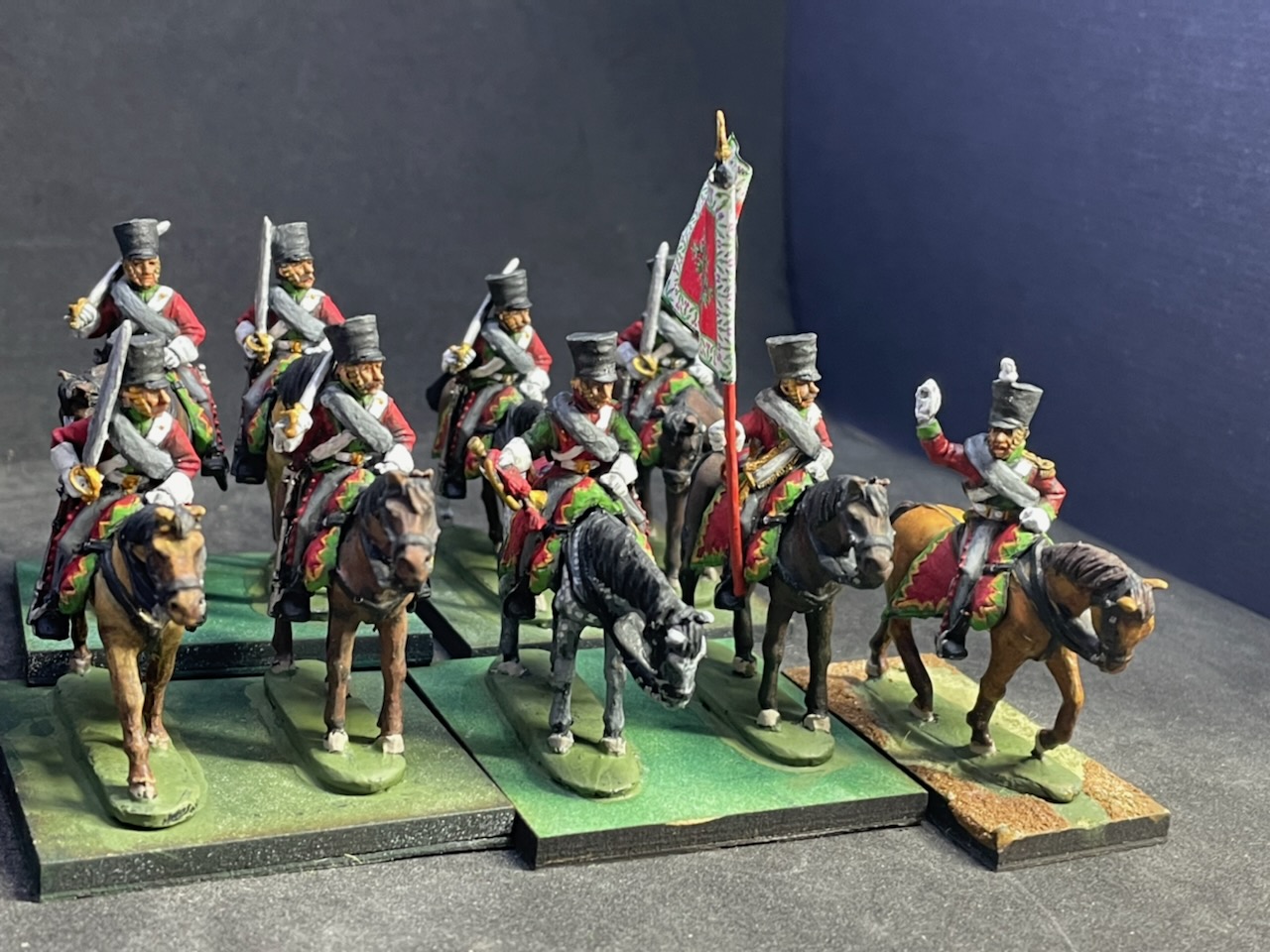 You're right if you spotted they're unfinished - based but not flocked as our Doug prefers to flock his own! Well that's it for another six months... well OK - hopefully not! I have to also thank my mate Peter Rixon who has given me an awesome and eclectic collection of figures including many unique Pulp and lesser known all-sorts ranging from Italian colonial to German East Africa to Chinese Warlord, the Black & Tans and IRA, African native, Turks and even some Zulus etc, etc. I am still deciding which from the first three I'm going to tackle first. I'd better get stuck into them before that Baron's War kickstarter arrives! (Oh Gawd, here we go again!)
Until next time.
Doc.