Its been a considerable break since the last post what with all that Covid lockdown crap (hopefully) behind us, I've saved up the bits and bobs of Doc's 'Art of War' activities for one final post for the shitty year that was 2021. Where I left off was my Empress Model T Ford scout vehicle (done to represent the ANZAC ALH unit in Palestine circa 1918) with another to be done to match but alas I've only gotten as far as building and base-coating as other (commission) work has intervened.

Finally getting a break from that I took the plunge and developed a late war (WWI) French platoon with supports for a series of games intended for Cancon next year - provided it isn't cancelled again with the next Covid outbreak! - and including some French armour. My wargaming friend Duncan has 3D printed a St. Chamond and a Schnieder which he has generously provided me for the painting of his own Trenchworx version of the model. The camo schemes used by by the French seem to vary widely so I've settled on one of the more common also used on their artillery (similar to that used by the Germans too) examples of which I have seen at the Musee de Armee in Paris and in the War Memorial here in Canberra. 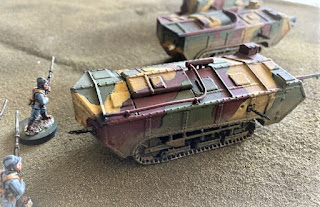 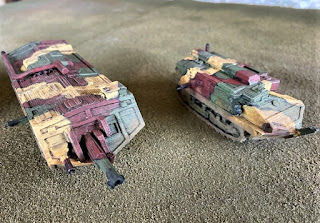 In between the various commish jobs I took the time to base and give a proper rendering to an old resin model (15 -25mm?) of a small destroyed church which I got from my wargaming partner in crime Doug and had been fought over on the tabletop for over thirty years (so time it got a spruce-up)! A great little model, its even got space to accommodate an observer or sniper in the wrecked belfry and perfect for our WWI gaming endeavors!

Just prior to this I had finished a commission job for Doug for supports for his late war Germans - two field guns and two HMGs. The models are the superb Empress but the bad news was I had to build them first! Both the guns and HMGs were a nightmare for failing eyesight and superglue soaked fat fingers! The basing is my own machined and cut MDF on magnetic sheet as in the middle of a @#*$lockdown I couldn't find any suitable commercially made bases the right size - AND he still had the temerity to whinge about the 'grassy bits' in the flocking - sheesh! there's no pleasing some people!  But seriously a splash of brown wash will get rid of the green bits. 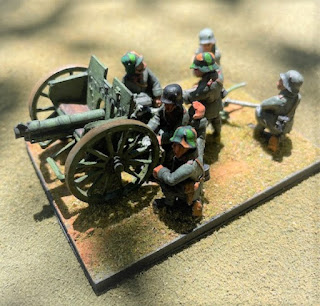 Before this I was finishing off Doug's lovely Calpe Saxons. They really are just about perfect Napoleonic figures which is a big call considering other high-quality metal ranges such as Perrys. A better quality control in the spin casting process perhaps as there is next to no flash or even mold lines on the figures which are also highly detailed. If I didn't have more than enough Napoleonics to paint I'd be very tempted to get them myself. Note they're still on the painting sticks which is because the client (Doug!) prefers to do his own basing, which is fine by me - its still $5 a figure ($10 for mounted). All figures are base-coated and (matt) varnished. I've stuck to this over the years and its still paid for my otherwise (probably) un-affordable hobby - well, mostly 😉 (just don't tell the Memsahib!) 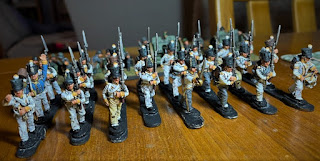 Another significant commission was for my good friend Peter and his Game of Thrones collection which featured in a previous post. He'd given me a range of fantasy figures and I kind of surprised him with my interpretation of R'llor(?) flaming swords and the Red Fire God priest types associated with them. In fact he liked them so much he gave me more to do. Not my cup of tea gaming-wise (I might play a game as a challenge but wouldn't collect them) but as I've stated previously, the figures themselves are superbly sculpted with great detail and some with well animated poses, so good to paint. 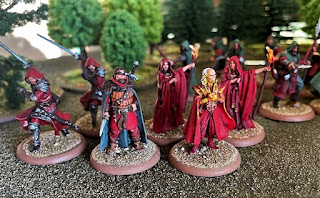 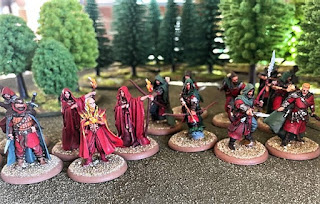 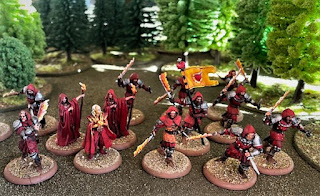 I'm sure there'll be more to come - the potential range of figures is huge and I know Peter - not being a man of half measures - has purchased to complete game series including hundreds of figures. I'll look forward to painting the next lot!

There is a lot more other stuff of my own in the works or awaiting my attention over the Christmas 'break' - I'll just have to get them into some semblance of order - like my late war French (now over half done!)

There is also another commission job - an 88 and crew (early WWII German) intended for action in France or even the Kondor Legion (SCW) - so don't worry Doug I haven't forgotten! The build for that one promises to be a nightmare too!  Then there are literally boxes of my own stuff, most of it here:
Posted by Doc Smith at 7:34 PM